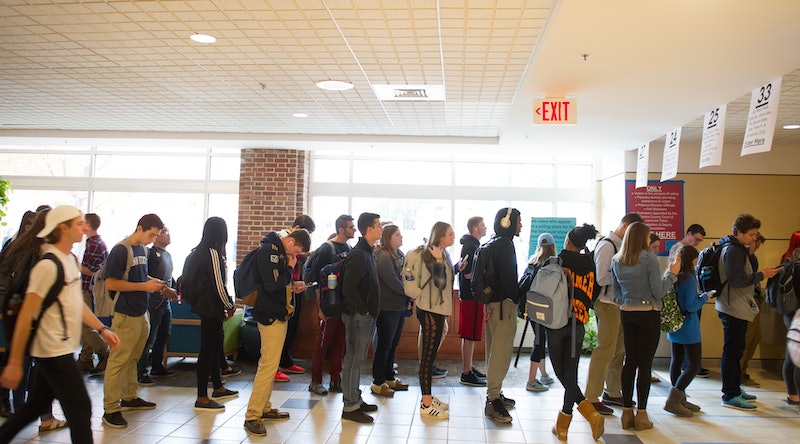 Electors across the country have just over a week to make up their minds. They'll gather in their respective states on Dec. 19 to cast their votes for the next president and vice president. Most electors will likely have to vote for the candidate who won the majority of votes in their respective state, but the electors in Pennsylvania, as well as a few other states, remain technically unbound to any candidate.

Pennsylvania's 20 electors are classified as "unbound," meaning that there is no state law that requires them to vote for the candidate who won the Quaker State in November's general election. Unbound electors are a lot like the unbound delegates you heard about during the primaries — they don't have to stick with their state's decision, but they often do. One reason that electors, in particular, often adhere to the state's vote is that all electors are chosen by the party who wins the state's vote. For instance, as Donald Trump won Pennsylvania back in November, the state's 20 electors were all nominated by the Pennsylvania Republican Party. Technically, those 20 electors are free to vote for whomever they want when they convene on Dec. 19, but it seems likely that most — if not all — will be voting for Trump.

Earlier in December, the state of Pennsylvania released the names and contact information of its 20 electors, all of whom were selected by the state GOP. As a result, electors began to receive thousands of emails and incessant phone calls, likely from voters hoping to sway the elector one way or another. One elector, Ash Khare, called the flood of emails, phone calls, and letters "total harassment." The state GOP has publicly criticized the state government for releasing electors' personal information.

In spite of the calls and emails, The Morning Call in Allentown, Pennsylvania, has reported that most Pennsylvania electors still plan to support Trump when it comes time to cast their votes. That shouldn't be surprising, though, because according to the Morning Call, all 20 of the electors are senior members of the state GOP's leadership. Their names are now publicly available, along with their contact information, but their votes will not be made official until later this month. Electors will vote on Dec. 19, and the votes must be sent to the president of the Senate by Dec. 28. While electors in other states have made efforts to turn "faithless" and vote against the state's majority, electors in Pennsylvania may be harder to sway.