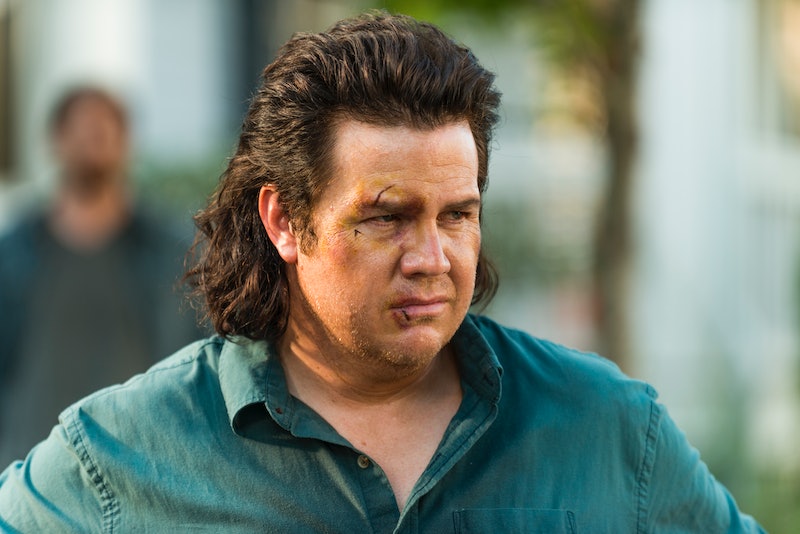 As satisfying as it was to see Rosita shoot at Negan, the aftermath was tense, and won't be resolved until the midseason premiere. What will happen to Eugene on The Walking Dead ? After making that bullet for Rosita, the Saviors kidnapped him — and something tells me he won't hold up as well as Daryl and Carl.

Are they going to kill him? Torture him? I'm not sure what song would make Eugene lose his mind. In the comics, Eugene is taken war prisoner by the Saviors as well. By that point, he has been making ammunition for the group for ages — though he's not thrilled about contributing to this much murder. It takes Negan a little longer to discover this particular talent of Eugene's. He refuses to comply, which is admirable, but not what I think is going to happen on the AMC series. The fact that this part of the comics has been moved up on the television show makes me think that Eugene is going to be forced into joining the Dark Side.

Still, the fact that he confessed to making the bullets was a touching show of bravery during that showdown between the Alexandrians and the Saviors. I loved watching Tara during those scenes as well. She hadn't met Negan yet, only heard stories from her fellow survivors at Alexandria and Oceanside. It wasn't half as bad as the night Glenn and Abraham died, and still quite the introduction. The idea of losing someone else was just too much, so Tara begged to be taken in Eugene's place. It was truly heartbreaking to watch.

As worried as Tara is, I don't think Eugene is going to die any time soon. Though the circumstances are tragic, I thinkThe Walking Dead has an interesting opportunity to develop his character away from Rosita and Abraham. Hopefully, he won't do too much damage before it's all said and done.