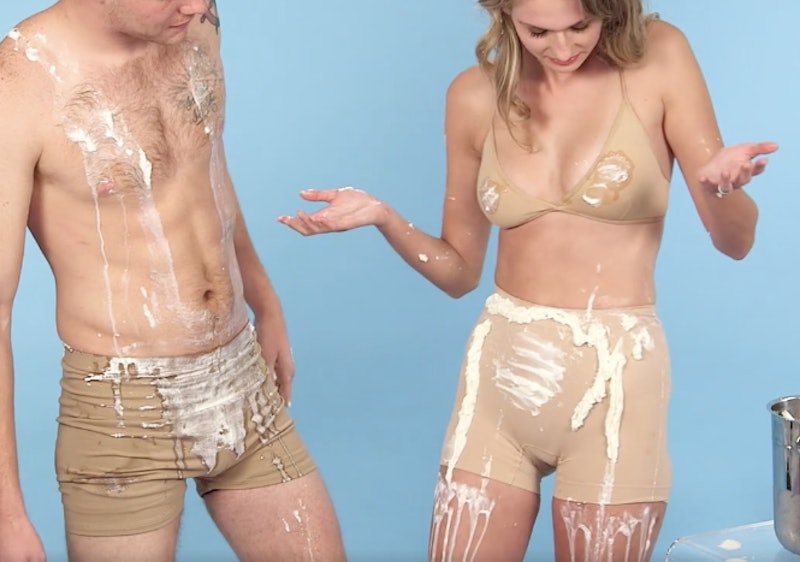 Food and sex sound like a perfect combination in theory. They're two of my favorite things, for one. But they both excite the senses, involve a sensual experience, and are great for bonding. But how do they combine in reality? Well, less well then you might think. I know people out there who love it — they get some strawberries and edible chocolate body spread and they're in for a good night. To me, though, it's a bit like the shower— great for foreplay, not so good for sex. And from what I see in this Cosmopolitan video, "Watch Real People Attempt Whipped Cream Lingerie", it isn't just me.

These brave couples — who have all been together for at least a few years — decide to try to make some whipped cream lingerie for each other. Well, that's a fancy way to put it. Basically they're spraying whipped cream on each other in a way that makes it as sexy as possible. Or at the very least, isn't completely ridiculous. But for most of them it does seem to be at least a little ridiculous.

You can check out the whole video to see how they feel about it and their take on food sex, (one couple insists the one time they tried it was awful), but it's really the whipped cream creations that you want to see. So here are my favorite attempts from the video. I say "attempts" because as much as they've got a bunch of good looking people trying their best, it definitely takes the sexy out of food in the bedroom:

Is She Drawing An Arrow?

Is that a pleasure arrow I see?

OK, so it wasn't an arrow. It turned into a lederhosen. I thought lederhosens couldn't get any less sexy, but here we are.

What Is Even Going On?

I mean, that's not even trying. She's just smearing it on there — and loving every second of it.

She's So Proud Of Her Creation

She looks so smug at the "heart" she drew, but I've never seen a heart that looks like that.

Damn, Boy. You Got Skills.

I'm genuinely impressed at the intricacy of this. This dude has an eye for detail.

He screamed "NIPPLE TASSELS!" But they promptly fell off. Adhesion is not whipped cream's strong point.

That's just outlining the butt. That's not even trying.

The running down the legs is particularly terrifying.

The verdict? It looks fun, but not sexy. Would they try it again. Well, as one of the guys says— "with Nutella"! Can't wait for that video.

More like this
How To Do The Intimacy-Boosting Lotus Sex Position
By Laken Howard and Lexi Inks
What Is The Forest Personality Test? The TikTok Trend, Explained
By Georgina Lawton
Expert Tips For Being On Top When You're Plus-Size
By Lexi Inks
Are Leo & Capricorn A Good Match?
By Kristine Fellizar
Get Even More From Bustle — Sign Up For The Newsletter