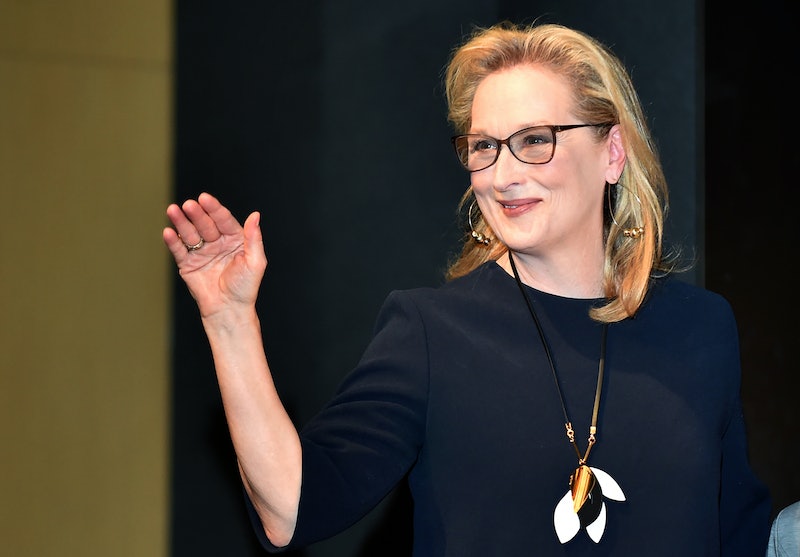 When you've already broken a record, the rest is just gravy. And that's life for Meryl Streep. On Monday morning, Streep scored her 30th Golden Globes nomination for her role in the musical biopic Florence Foster Jenkins. The actor already stood far from the rest of the pack before this Best Actress, Comedy nod came through. According to the Golden Globes site, the record for second highest amount of nominations belongs to Jack Lemmon (who passed away in 2001) with 22. Streep also holds the records for most Golden Globe wins with a staggering eight trophies. Whether she bests her fellow nominees in this category or not, she's still going home with something. Streep is receiving the Hollywood Foreign Press Association's Cecil B. Demille achievement award at this year's ceremony. Past honorees include Steven Spielberg, Barbara Streisand, and Morgan Freeman. It's not an official title, but I think Meryl Streep can safely and figuratively be crowned the forever queen of the Golden Globes.

Joining Streep in the Best Actress, Comedy Or Musical category are Annette Bening for 20th Century Women; Lily Collins for Rules Don't Apply; Hailee Steinfeld for The Edge of Seventeen; and Emma Stone in La La Land. I'm not surprised that Streep and her Florence Foster Jenkins co-stars Hugh Grant and Simon Helberg caught the attention of the HFPA for this movie. It's a musical underdog story about the transformative power of art — even if it's bad art. And Streep did all her own singing for the role. As a woman bound and determined to sing whether anyone wants to hear her or not, the actor gives another skilled and moving performance.

According to the Golden Globes, Streep is in a class completely by herself. And must be thrilling for first time nominees Collins and Steinfeld to be nominated in the same category as a certified legend. (La La Land is Stone's third nod; 20th Century Women makes eight for Bening, who won for The Kids Are Alright in 2011.) Streep is miles past the point of needing the validation that goes hand-in-hand with awards attention. So though this nomination is as well-earned as her 29 others, a win would have more impact on the career of one of the younger performers in that category.

Regardless of how the Best Actress award plays out, I'm looking forward to watching Streep be presented with this lifetime achievement award. Her history with the Globes proves that there's no working actor who is more deserving of the honor. Streep is a trailblazing and a record breaker. And she's shown no signs of slowing down.