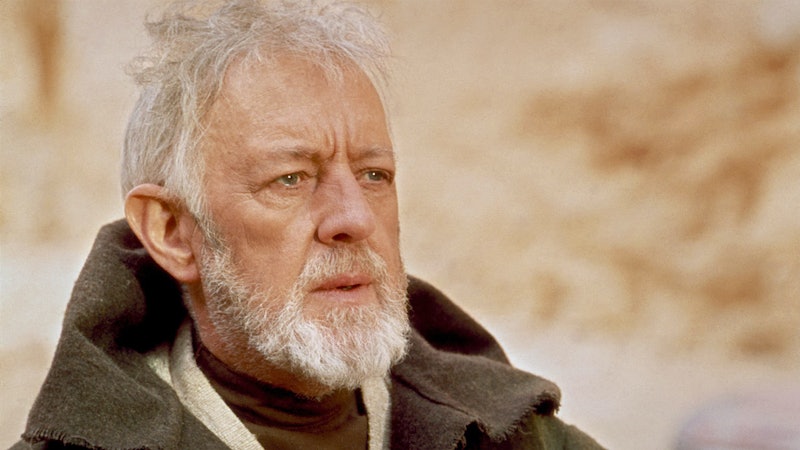 Obi-Wan Kenobi is one of the most well-known Star Wars characters. He's also one that has appeared in the most films, with a pivotal role in both the original trilogy and the prequels. The character hasn't appeared on the big screen since 2005's Episode III, though he did have a small cameo in The Force Awakens via voice-over. After Obi-Wan's death in the original trilogy, it makes sense that he wouldn't appear in the new Star Wars trilogy, which takes place 30 years later. But, what fans really want to know now is, will Obi-Wan be in Rogue One ?

Unlike TFA, Rogue One: A Star Wars Story takes place right before Star Wars: Episode IV , during a time when Obi-Wan is alive and well. So a cameo or brief appearance from Obi-Wan would not be uncalled for. In fact, as far as some fans are concerned, it's practically mandatory. But does it happen? Spoiler alert - nope. Rogue One takes place at a time when the Jedi are believed to be extinct or in hiding. They are not openly taking part in the Rebellion, which means Obi-Wan's involvement with the rebel group tasked to steal the plans for the Death Star would be minimal, if it even existed at all, and so the character does not appear in Rogue One. However, Bail Organa (Jimmy Smits) does allude to knowing where Obi-Wan is in hiding. No visuals, though.

But even if Obi-Wan were to appear in Rogue One, the question wouldn't be how or why, it would be who would play him. Over the course of the Star Wars series, Obi-Wan has been played by two actors: Alec Guinness, who originated the role in Episode IV, and Ewan McGregor, who played a younger version of the role in the prequels. Guinness died in 2000, but McGregor is still very much alive and willing to reprise his role. He even recorded new dialogue for The Force Awakens. If McGregor were to have returned as Obi-Wan in Rogue One, it would've required some pretty fancy makeup. The actor would, after all, have had to look more like Guinness' Obi-Wan than his own. Sadly, however, the character does not make any cameo, changed appearance or not.

Perhaps he'll appear in later films, though. Rogue One director Gareth Edwards recently said that he's dying to see an Obi-Wan movie in this new phase of the Star Wars series, telling The Playlist, "I would love to see anything with Obi-Wan Kenobi in it." So keep an eye out for Obi-Wan appearances in future Star Wars films.

Fans disappointed that the character isn't in Rogue One might find a silver lining in that cool Jedi statue shown in a few Rogue One trailers. While there has been some debate among fans as to who, exactly, was immortalized in stone, there's no denying that the statue does share some resemblance to McGregor, even if it is coincidental.