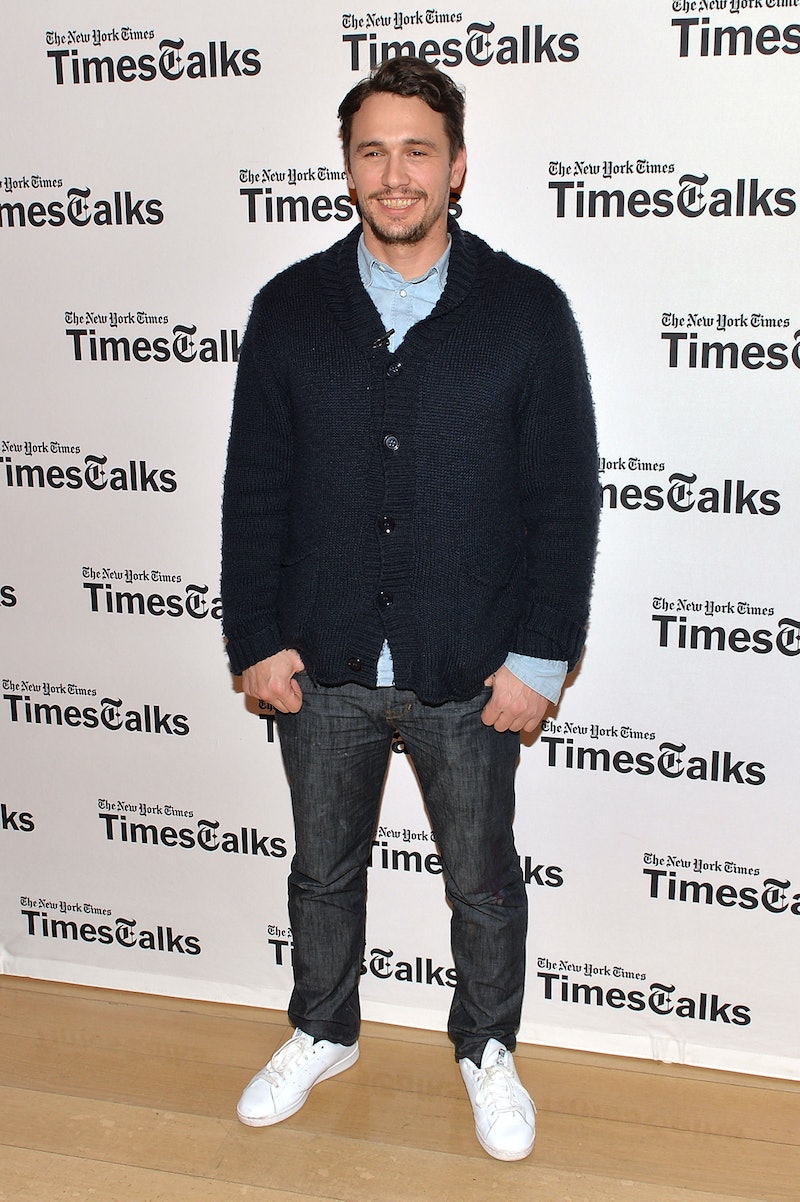 Usually, the only things James Franco's Instagram provides are selfies and celebrity-filled throwbacks, but on Thursday it became the source of a possible scandal. Photos posted on Imgur claim that Franco privately messaged a 17-year-old girl, seeking to meet her in her New York City hotel, pretty obviously for sex. The 35-year-old actor basically denied the claims in an Instagram post that has since been removed, but hasn't directly addressed them. So is it true?

As with most rumors that start online or with social media, it's hard to verify anything. The original Imgur photos, which contained screenshots of both an Instagram private message conversation and text messages, have since been taken down and it's not clear who posted them in the first place. Plus, faking messages to post online is so easy, especially iPhone conversations. There are even multiple websites and generators dedicated to it. Yet at the same time, some of those messages contain things that would be much harder, though not impossible, to fabricate, like photos.

If the conversation really did occur, Franco wouldn't be in legal trouble, though his reputation would certainly be damaged. The age of consent in New York, where this allegedly occurred, is 17, so why the cops may not need to get involved, there are ethical issues and a generally creepy ew factor that would surround him from now on.

Should we all immediately unfollow Franco on Instagram and begin the shunning process? Let's take a look at some of the evidence to see if this is a true story or just a hoax.

Early in the conversation, the girl says that she is from a small town in Scotland, visiting New York City for her 18th birthday. As you can see here, she says she's "nearly 18" and he still asks for her hotel information and phone number. But these messages seem fake, if you consider how creepily aggressive "Franco" is being. Three questions in a row? And if those three emojis aren't enough to send an adult man running, I don't know what is. It seems more like something a frat guy would send you on Tinder (though even he would be scared by those heart eyes).

Once the conversation moves from Instagram to texting, the girl asks Franco for proof that it's really him, twice. The photos don't mean the story is definitely true, but those pictures are definitely Franco and they give much more legitimacy to the conversation. The photos could have been found somewhere else, or actually sent to this girl from Franco in a very determined quest to have sex with her. You can see the second photo without the name blurred out on Perez Hilton, and decide whether you think it's been faked.

Franco's attempt at a denial was to post this meme of himself on Instagram. The caption reads, "I'M NOT! I HOPE PARENTS KEEP THEIR TEENS AWAY FROM ME. Thank you." That is probably the least convincing defense in history. Anything put below a meme can't be taken too seriously, and his message itself doesn't say "I'm not into teenaged girls," as much as it does, "I shouldn't be around teen girls."

Sure, the first sentence is "I'M NOT!," but what's with the message to parents to keep their teens away from him? Because if teens are around him he can't help but to try and have sex with them via Instagram? And does Franco not realize how many of his fans are probably teens? If he really wants to convince us that he's innocent, Franco needs a real, publicist-approved statement and quick.

On Wednesday, the trailer for Palo Alto was released. The film is an adaptation of Franco's collection of short stories of the same name, and he'll play Mr. B. As a Buzzfeed commenter noticed, in the book, Mr. B. is a gross coach who dates a 14-year-old from his school. It's interesting timing for Franco to be accused of going after teenaged girls. Is it all a publicity stunt or did he get too into character this time?

It could really go either way and until Franco makes a more definitive statement, fans are left wondering just how disappointed in him they should be.

More like this
Morfydd Clark’s Party Trick Is Only Impressive To “People Outside Of Wales”
By L'Oréal Blackett and Maxine Harrison
Paul Mescal, Man Of Mystery
By Samantha Leach and Heather Hazzan
Twitter Has So Many Thoughts About ‘Don’t Worry Darling’ After Its Release
By Stephanie Topacio Long
Florence Pugh Reflected On Her ‘Don’t Worry Darling’ Experience On Opening Day
By Brad Witter
Get Even More From Bustle — Sign Up For The Newsletter