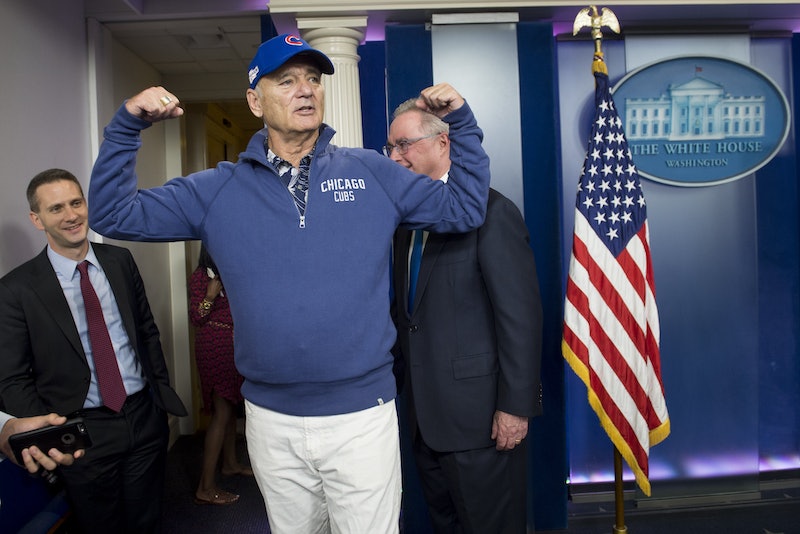 This year has certainly been rough for President Barack Obama and Democrats in general. And after the Democrats and progressives' painful defeat in the general election, everyone could really use a little pick-me-up as the year comes to a close. Thankfully, President Obama himself delivered a spot of joy on Sunday in the form of a short video posted to Twitter. Over the weekend, Bill Murray played golf with Obama in the Oval Office, and the two reportedly chatted about the Affordable Care Act.

In the video, Murray and Obama create a makeshift putting course and are seeing who can tap the ball into a glass laying on its side. Keeping with the lighthearted mood, Obama riffs on Murray for donning his Cubs gear in the White House. Murray, a longtime Cubs fan, jokes back at Obama, suggesting that he should capitalize on the Cubs' popularity right now. But Obama clearly isn't having it, as he's a White Sox fan.

Murray takes a swing, easily delivering the ball into the cup, but after retrieving the ball for Obama, complains about knee pain. Obama suggests that he get it looked at if it's bothering him, and Murray replies that he doesn't have a doctor to go to, and then reveals that he doesn't have health insurance, providing a convenient segue into a discussion of the Affordable Care Act. So Obama explains that he can still get coverage thanks to the ACA, but that he needs to do it soon in order to have coverage by January 2017. The deadline is Dec. 15.

The White House tweeted the video Sunday night, introducing it with the cute pun "Don't putter around." Regardless of your opinion about the health care reform, it's impossible to ignore the fact that more Americans now have health insurance than ever before. However, Republicans have vowed to repeal key provisions of Obamacare in 2017, regardless of whether or not they establish an alternative system beforehand. This has the potential to leave many Americans without coverage for an unknown period of time.

Obama is likely in a strange position, knowing that he worked very hard for many years to reform American health care, only to see it possibly dismantled shortly after he leaves office. The White House video is an effort to provide as much assistance to Americans in need before he has to relinquish his title as the Republican agenda takes over. What will happen in the coming months is unknown, but this small video is another reminder of the way Obama has put in the time and effort during his presidency to look out for the American people. Or at least give them a reason to smile for a minute.

More like this
Christina Aguilera Took A Powerful Stand At Brighton Pride
By Sam Ramsden
Are John Legend & Kanye West Still Friends? The Singer’s Latest Update Is Candid
By Brad Witter
'Scream’s Courteney Cox Has Broken A Major Horror Record
By Sophie McEvoy
Which Cast Member of 'Westworld' Season 4 Has the Highest Net Worth?
By Meg Walters
Get Even More From Bustle — Sign Up For The Newsletter