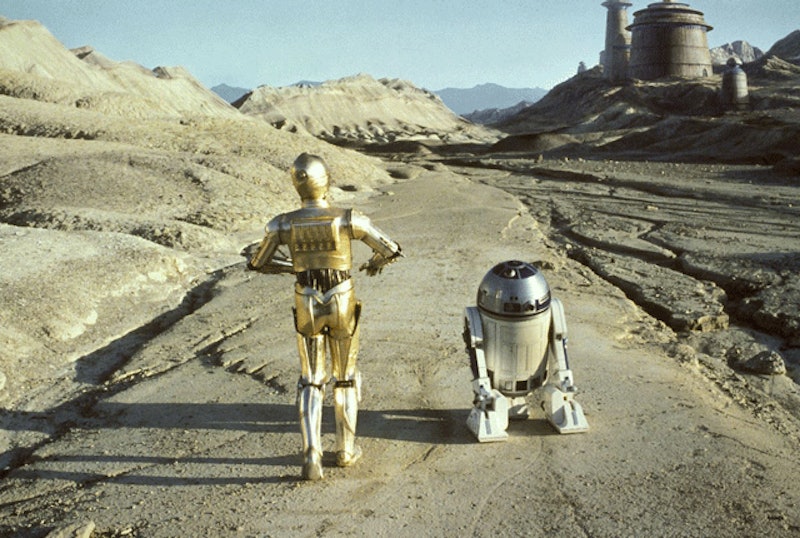 Soon, all the mysteries of the first Star Wars anthology movie will be solved. Rogue One: A Star Wars Story comes to theaters Dec. 16, ending speculation about how the movie will connect to the prequels and the original trilogy and which existing Star Wars characters are making secret cameos. Disney has been promoting Rogue One with the promise of some new Darth Vader content, so that's one reprisal confirmed. Since this film takes place right before A New Hope begins, all of the characters who appear in that adventure are technically fair game. That bench includes the robotic Rosencrantz and Guildenstern of the Star Wars universe — those two bickering droids who end up saving the rebellion. So, are C-3PO and R2-D2 in Rogue One ?

Lucasfilm and Disney have not confirmed that C-3PO and R2-D2 are included in Rogue One. Neither character appears on the movie's IMDB credits or on the StarWars.com character dossier. Their absence from those lists doesn't mean that those droids are definitely not in the movie; a surprise cameo loses some of its desired impact if the cat is let out of the bag too early. And (spoiler alert!) the beloved droids do end up appearing in the film, albeit in very small roles.

Their appearances, which occur late into their film as they watch the climatic battle go on, actually make some sense. Pre-A New Hope, C-3PO and R2-D2 are employed by Leia's adoptive father, Senator Bail Organa. And Bail Organa definitely does get some screentime in Rogue One. He'll be played by Jimmy Smits, who also embodied that character in Attack Of The Clone and Revenge Of The Sith. It's only too easy to give fans a glimpse of those two beloved droids following their master around.

Also, Anthony Daniels, the actor who has been playing C-3PO since 1977, was in attendance at the Rogue One world premiere, so it's not much of a shock that the fussy android appears in the film. Sadly, Daniels didn't walk the carpet with his long-time co-star. R2-D2 actor Kenny Baker died this August at the age of 1981. Daniels remembered him in a touching tribute tweet.

I would've been surprised if C-3PO and R2-D2 didn't make the Rogue One cut, as their appearances are great wink at the fans. And though their roles are slight,the spirit of their friendship lives on in an interesting way. In an interview with USA Today, Rogue One director Gareth Edwards said that he lifted inspiration for the relationship between Chirrut Imwe and Baze Malbus (played by Donnie Yen and Jiang Wen) from Akira Kurosawa’s The Hidden Fortress. That movie also provided the baseline for that best frenemy bond between R2 and Threepio.

Rogue One is a new type of Star Wars movie. But Star Wars just isn't Star Wars without its original droids.