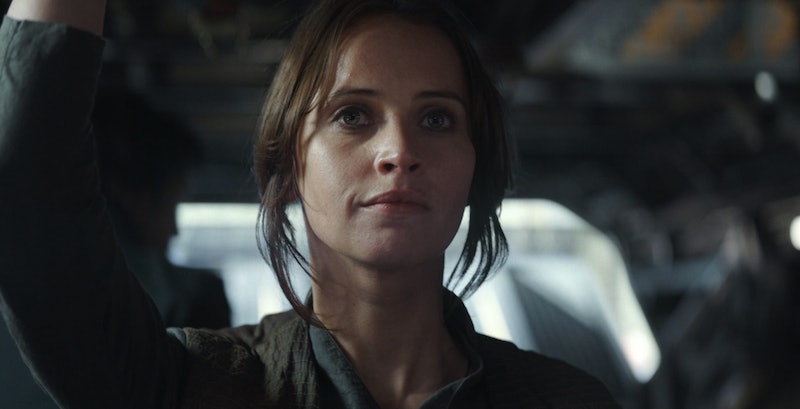 It's should come as no surprise that young female fans have already taken to Rogue One's lead, Jyn Erso, even before the film has graced screens all over the country. As far back as July, young fans were cosplaying as Jyn and cheering with reckless abandon when the actor who plays her, Felicity Jones, took the stage at Star Wars Celebration's Rogue On e panel. Of course, Jyn's a fierce, commanding presence in the trailer whether she's fighting off stormtroopers, dodging bombs on the beach, or commanding a crew of rebels with fire in her eyes, says a lot to fans waiting to meet the new hero. But there's even more to her appeal, according to the woman behind the hero.

"You really empathize with her and identify with her because she's not a princess, she's not glamorous," says Jones, curled up in an armchair at Lucasfilm headquarters in San Francisco. It's been a long day of interviews, but her passion for the character doesn't seem to have waned and she smiles when she speaks of Jyn. "She's come from nothing and she's in a bit of a not great situation when we meet her and I think it just shows that she's an ordinary woman in extraordinary situation."

"...I think there's so much pressure sometimes for women to feel like you've got to be this perfect ideal and actually it's not [about that]. It's about embracing whatever you have and being true to that."

The film does set up Jyn as an everywoman, and when she begins her story, she's not exactly the shiny, expected hero. Of course, as the poster and trailer betray, something stirs her enough for her to join the rebellion and become that unlikely hero (I'd tell you what that something is, but I want you to enjoy the film, OK?). It's a message that young women and girls absolutely need to see in the Star Wars universe. Though another important Star Wars hero, The Force Awakens' Rey, certainly doesn't start her journey in comfortable or enviable circumstances, she, Luke Skywalker, and young Anakin Skywalker are all blessed with that special something: they discover that they're extremely force sensitive and destined to become jedis. Jyn, however, has a rough life and the only thing that can change her circumstances is her own gumption. No lightsabers. No jedi mind tricks. Just diving in headfirst.

This self-starting, action-oriented spirit is not only reflected in what Jyn does, but how director Gareth Edwards and crew handled the aesthetics of the character in Rogue One. It's a process that resolutely represents Jyn as a guerilla warrior, full stop.

"Once I left that [makeup] truck, I never even thought about how I was looking, I just didn't even care. I just threw myself into Jyn and I think that's what makes her a good role model," says Jones, adding that Edwards' decision to keep actors from knowing where the camera was during many scenes helped create that lack of self-conscious behavior on-screen.

"She's not constantly thinking about how she's looking. She's got a task ahead of her and she has a focus and that's what's important, And she's not trying to be perfect. I think there's so much pressure sometimes for women to feel like you've got to be this perfect ideal and actually it's not [about that]. It's about embracing whatever you have and being true to that," says the actor.

While a character like General (and Princess) Leia is absolutely someone young women can look up to and has a few rough edges of her own, she's still quite polished. She's always got that beautiful, glam glow about her, and even when she pulls off her bounty hunter mask to rescue Han Solo in Return of The Jedi, she's got perfect wispy curls peeking out her practical, but perfect up-do (something you could also say of Rey in The Force Awakens at most moments). Jyn, on the other hand, has no real signature hairstyle. No subtle glow provided by strategic makeup. No iconic outfits. Jyn is depicted with only practicality in mind: vague, but battle-ready clothing, hair asunder and only pulled back enough to keep it out of her way. In most scenes, she's got dirt smudges all over face.

Jyn — even more so than the still extremely fierce Star Wars heroines before her — is the definition of scrappy and when fans finally meet her, I have no doubt that they'll be even more obsessed with her than they already are. Jones, for her part, is a bit more cautiously optimistic.

"I was with a friend of mine [and] their children ... they were playing with Kylo Ren and Rey dolls, and then it was interesting, like I wonder if this time at the end of the year they'll be playing with little Jyn dolls and Cassian dolls," Jones says with a smile.

And with the Rogue One release only days away, I'm going to go out on a limb and venture that Jones won't have to wonder about her character worming her way into youngsters' hearts for much longer. After all, for many female Star Wars fans, she's there already.