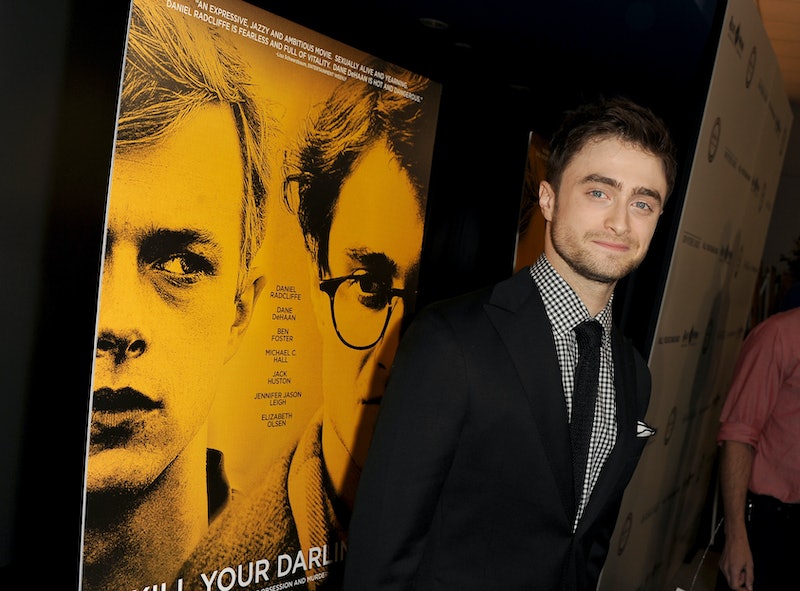 When you tell the world that there is going to be a movie spinoff of Harry Potter — then add to the frenzy by announcing that the movie will be a trilogy — you kind of have to prepare yourself for some rioting in the streets. The good kind of rioting, of course. The kind of rioting that launches a revival of the Harry Potter fandom the likes of which hasn't been seen since J. K. Rowling decided to tell everybody that Ron Weasley and Hermione Granger was kind of a bad idea, a revival that's a lot more positive and involves a lot less rage and tears. There were still some tears, of course, but all of this movie news made it only a matter of time before someone asked Harry Potter himself what he thought of coming back for more movies. And what Daniel Radcliffe thinks is a tentative no thanks.

In an interview with the CBS show The Couch, Radcliffe said that he "[didn't] know under what circumstances I could be convinced that it would be a good idea to do it again", citing the fact that as a 25-year-old man he's a bit old to still be answering to the name Harry Potter. Or is he?

Of course, considering the Fantastic Beasts and Where to Find Them trilogy is confirmed to take place decades prior to Harry's time, none of us really expected Daniel Radcliffe to appear in the movie anyway. Then again, since Radcliffe also mentions that would "never close the door on something like that entirely", why should we? After all, the magic of the Harry Potter universe allows for several ways that Radcliffe could appear in the films without compromising canon. We all remember how much fans hate compromising canon .

If Hermione Granger can use a time turner just to take extra classes when she's thirteen years old — and, okay, to later prevent two murders, whatever — then who's to say that something in Newt Scamander's life can't have such a terrible impact on the future that Harry has to jump all the way back to Newt's time to help him? Harry's "saving people thing" isn't going to end just because he defeated the Dark Lord; he grew up to become the Head of the Auror Department at the Ministry of Magic. You know what else they have at the Ministry of Magic? Time turners. Just saying.

There are a lot of things that Harry Potter fans had to ignore to watch the movies. Harry not having green eyes, for example. Hermione's hair, for another example. All of Ron's best lines being given to Hermione, for a third. However, perhaps one of the most egregious examples was being forced to ignore that instead of looking "identical to his father except for his mother's eyes", Radcliffe's Harry looked like Daniel Radcliffe in glasses and no one else. Even if Fantastic Beasts takes place even before James Potter's time, who's to say that James didn't look identical to his father and to his grandfather and to his great-grandfather? Imagine this, but as a family portrait:

If Radcliffe really isn't ready to set a foot back in the franchise for a longterm commitment, he could always make a cameo appearance. Professor Trelawney may have been a sorry excuse for a seer most of the time, but she was far from the only one. She inherited her abilities from her great-great-grandmother Cassandra Trelawney, who was actually good at making prophecies, so perhaps Cassandra and Newt's paths can cross and she can see into the future of the Harry Potter franchise with. Ron Weasley will buy an ice cream truck. Hermione Granger will become a model. Harry Potter will get naked on stage. That kind of thing.

More like this
Daniel Radcliffe Is Shirtless In The New Trailer For His Weird Al Yankovic Biopic
By Jack Irvin
Why The '365 Days' Sex Scenes Are Good, Even If The Movies Aren’t
By Arya Roshanian
At 28, Minnie Driver’s Personal Life Was “Falling Apart”
By Kate Dwyer
Elizabeth Olsen's Chris Evans Friendship Update Was Accidentally Hilarious
By Grace Wehniainen
Get Even More From Bustle — Sign Up For The Newsletter