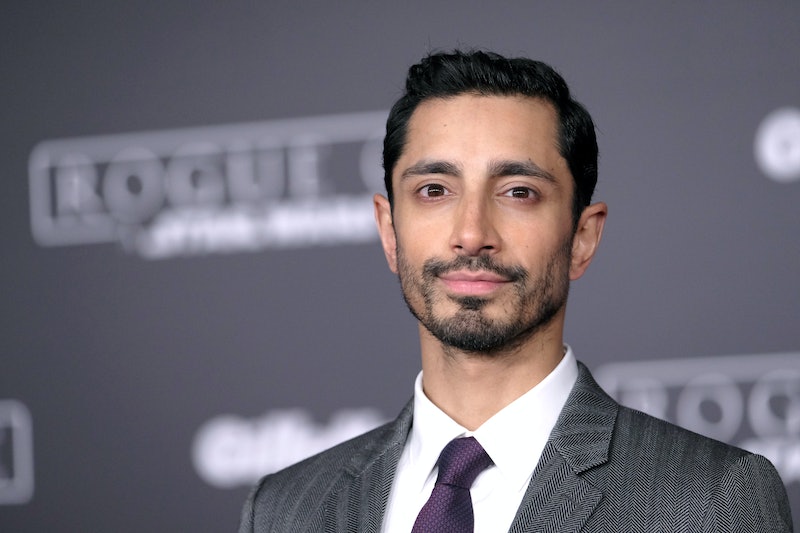 You might not see it coming, but I'd wager that you're going to have a soft spot for Bodhi Rook upon seeing Rogue One on Dec. 16. The former Imperial pilot who forsakes the Empire — and as we see in the trailer, gives our renegade crew their name, Rogue One — is only one piece of the film's ensemble, but he's a memorable one. A great deal of the credit obviously goes to the actor who plays Bodhi, Riz Ahmed, who you may know from his now Golden Globe-nominated turn on HBO's The Night Of. Or his many films, including Four Lions and Nightcrawler. Or his music career as Riz MC. Or from his excellent essay, "Typecast As A Terrorist," from The Good Immigrant. He's been busy. But on top of all that, the guy's got jokes.

"Ultimately I think [Rogue One] is a real stepping stone for my real goal which is to play Yoda. That's the real plan. I don't tell too many people about that," Ahmed says with a deceptively straight face, when I sit down with him at Lucasfilm Headquarters in San Francisco. He's even got a hashtag in mind for the Twitter campaign that I jokingly offer to help start: #Bodha, naturally. Considering that this is the man who sent Rogue One director Gareth Edwards a grand total of 12 audition tapes to nab the role of Bodhi, it takes me a split second to be sure he's only kidding.

"I haven't mentioned it to [Kathleen Kennedy] yet, but I think she'll go for it," he adds, this time with a slight laugh. (Kennedy, for the uninitiated, is the head of Lucasfilm.)

But jokes aside, Ahmed might actually need to get creative if he wants to stay in the Star Wars universe — as Kennedy and Chief Creative Officer of Industrial Light & Magic, John Knoll, have repeated numerous times, Rogue One is a standalone movie. The sequel already exists and I'm pretty sure no one's looking to re-make A New Hope with Rogue One characters magically shoehorned in. (Admittedly, Ahmed's other idea — "A Bodhi prequel, amirite?" — is a bit more feasible.)

When I ask Ahmed about the legacy his character might leave behind with this one-off adventure, his tone becomes more serious. Well, mostly serious.

"All the characters in this film are ones that have a complex history and [are] bringing that to the table and it gets in the way of their ability to trust people, so I think that Bodhi and Jyn are both people that have trust issues — building relationships off of Drake songs, basically," he says. (See: A 2011 Drake song titled, appropriately enough, "Trust Issues.")

But the character doesn't just overcome those trust issues, he goes up against the darkest force in the galaxy. It's something Ahmed says makes him feel proud.

"Bodhi is an average Joe, he's not someone's kid, he's not a political elite, he's a long distance truck driver, basically," says the 34-year-old. "And yet he can make a difference because he stands up for what he believes in, takes a risk, makes a sacrifice. That's, I think, a strong message and that's what I'm proud of for sure."

Standing up against the Empire to "make things right," as Ahmed puts it, is pretty risky, especially for someone who's as continually anxious as Bodhi is. But that's also what makes the character and his companions so powerful.

"This day and age, I think that's a strong message: Any average person out there who's willing to fight for what they believe in can make a difference and we shouldn't just leave it in the hands of elites, you know political elites or dynastic elites, to decide the fate of our future," says Ahmed, alluding to 2016's tumultuous political landscape and many people's desires to create change in the world.

And you thought we were just here to talk about Star Wars. I'll bet you've developing that soft spot already.

More like this
Gabby & Rachel Reveal How That 'Bachelorette' Rose Ceremony Twist Happened
By Grace Wehniainen
Christina Perri Had No Idea Her 'Twilight' Song Is On YouTube's Top 100 Chart
By Radhika Menon
How Director Quinn Shephard Turned Dylan O’Brien Into A “Viral Weed Blogger”
By Samantha Leach
At 14, D'Arcy Carden Was Sneaking Out To Parties & Crying Over Kurt Cobain
By Ivana Rihter
Get Even More From Bustle — Sign Up For The Newsletter