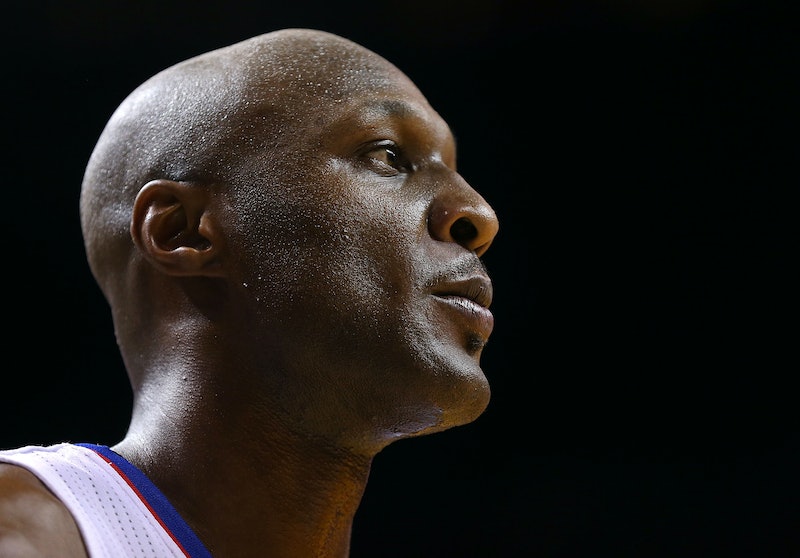 Former professional basketball player Lamar Odom recently checked himself into a rehab facility in San Diego, E! Online reported on Monday night. According to E! News’ source, it was Odom’s own decision. “He wanted to work on his mental and physical health for the next chapter of his life," the source reportedly told E! News. "He has not fallen off the wagon, but he understands the importance of maintaining his sobriety." Bustle reached out to Odom's reps for comment and did not hear back in time for publication.

Odom's choice to enter rehab comes a year and two months after he was found unconscious at Dennis Hof's Love Ranch due to an overdose. The retired NBA star spent the next few months in the hospital, and in February, he made his first public appearance since the accident when he attended Kanye West's The Life of Pablo/Yeezy Season 3 release party.

According to TMZ, Odom has reportedly been in the San Diego facility for four days and will be there for an "extended stay." A source reportedly told Us Weekly that Odom admitted himself into rehab "for his kids" and “also wanted to feel 100 percent again. He did not relapse, but felt like he wanted to get away and start fresh for the New Year."

It's a really good to see that Odom is taking his health into his own hands and seeking the treatment he needs on his own. Here's hoping for a speedy recovery for the former basketball star.

More like this
Everything To Know About Netflix’s 'Never Have I Ever' Season 4
By Jack Irvin and Gabrielle Bondi
What Is Megan Thee Stallion’s Net Worth? The Traumazine Hitmaker Isn’t Worried About A Budget
By Hugh McIntyre
Megan The Stallion’s “Anxiety” Song Shouts Out Britney Spears & Whitney Houston
By Grace Wehniainen
Meet The New Team Of Residents Joining 'Grey's Anatomy' In Season 19
By Brad Witter and Sophia Moore
Get Even More From Bustle — Sign Up For The Newsletter