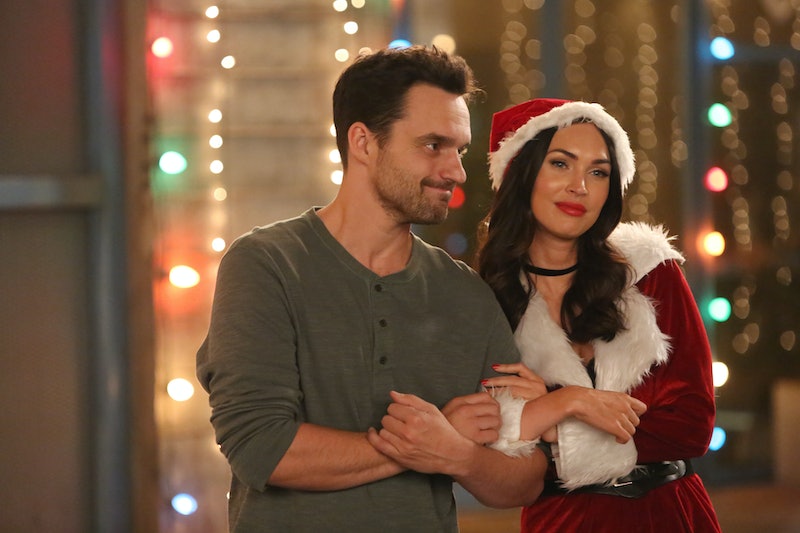 There isn't really a more magical time of the year than the holiday season. If you want proof of that, you needn't look any further than Tuesday night's winter finale of New Girl, which sees the return of Reagan (Megan Fox) who's in town to surprise her boyfriend Nick (Jake Johnson) just in time for Christmas, wearing a sultry Santa Claus costume and all. So does this mean we'll be seeing more of Reagan into the new year and beyond on this beloved FOX comedy? Perhaps if we've all been good this year, Santa, aka the powers that be at FOX, will inform us of how long Reagan will be on New Girl .

But since half of the fun of the holidays is peeking at presents and trying to guess your gifts before Christmas morning anyway, you can do a little digging to get an idea of how much more of Reagan we'll see, if any at all, before New Girl returns from its winter hiatus. Why, this season's Christmas episode, "Christmas Eve Eve," may provide some hints in and of itself. In the episode, Reagan reunites with Nick after being away in New Orleans for work because Jess (Zooey Deschanel) invites her to be with her boyfriend at Christmas as a last-minute Secret Santa gift, Entertainment Weekly reported in advance of the episode.

That may seem odd to New Girl fans since Jess has shown that she still has feelings for Nick, but the series executive producer Dave Finkel explained to EW that she's his friend, first and foremost, and she just wants him to be happy. “That’s always going to be in the back of her mind, but the thing with Nick is she’s living under the umbrella of, if things are going well with Nick and he’s happy with Reagan, she’s not going to be the one to tear them apart,” Finkel said. “She puts friendship first.” If Jess isn't looking to break Nick and Reagan up, that bodes well for this character to stick around.

Well, we know that Reagan will definitely be in the first few New Girl episodes of 2017. The below photos from the episodes "Raisin's Back" (airing Jan. 3), "Cubicle" (airing Jan. 10), and "Hunk Hunt" (airing Jan. 17) show Reagan spending some quality, alcohol-fueled time with Jess, cuddling with Nick, and getting into the usual shenanigans with the loftmates.

It looks like that won't be the last we see of Reagan this season, either. TVLine reported in July that Reagan would have a "huge arc" on New Girl this season, which could include appearances in as many as eight episodes. Reagan's return and this arc were said to not kick off until midseason so as to accommodate the birth of Fox's third child with husband Brian Austin Green, which took place on Aug. 4, according to E! News. Well, it looks like we're right on schedule.

What's also reassuring about the chances of Reagan remaining on New Girl for a while is that, other than filming the upcoming movie Zeroville , which wrapped production earlier this year, according to IndieWire, Fox doesn't seem to have any other projects in the works. That means she could be free to play Reagan for an indefinite amount of time. Since Reagan has really helped breathe new life into a series that's been on the air for six seasons by adding a whole new dynamic among the loftmates and a new dimension to Jess and Nick's characters, I certainly hope that's the case.

More like this
‘Stranger Things’ Stan Megan Thee Stallion Grilled Natalia Dyer About Nancy & Steve
By Brad Witter
Does 'Locke & Key’s Ending Mean There Could Be A Season 4?
By Sophia Moore
'Yellowjackets' Just Announced Who’s Playing Adult Van & It’s Perfect
By Gretchen Smail
'The Capture' Is Finally Back – & S2 Looks Tense AF
By Sophie McEvoy and El Hunt
Get Even More From Bustle — Sign Up For The Newsletter