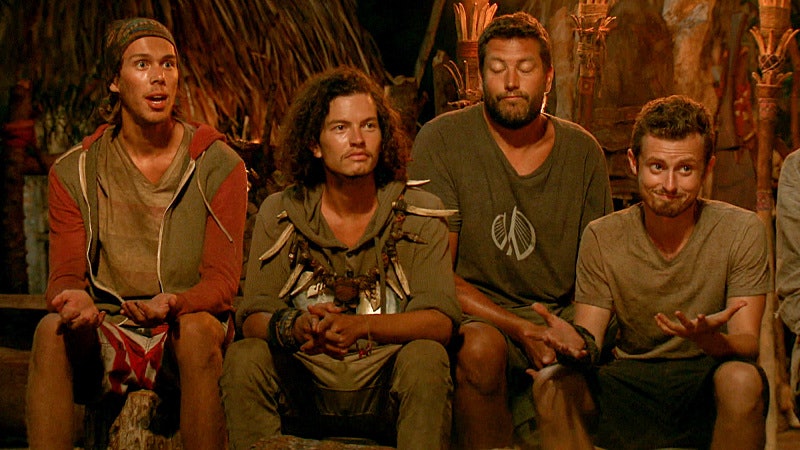 Well, Survivor fans, you made it through grueling immunity challenges, tribal council blindsides, and tears on tears on tears, but you did it. You got to the two-hour Season 33 finale of Survivor airing Wednesday, Dec. 14 at 8 p.m. ET on CBS. And now, you can practically sit back and relax as you wait to find out who will earn the title of Sole Survivor this season. Well, you can almost relax. That's because once you find out who's going to be taking home the top prize of $1 million, your mind will probably start racing as you wonder when Survivor returns for Season 34.

Actually, you can breathe easy on that point as well. CBS announced in November that Survivor will get a two-hour Season 34 premiere on Wednesday, March 8 at 8 p.m. ET, according to Deadline. Hopefully, Survivor host Jeff Probst will spill some more details on the upcoming season of the reality competition during this season's cast reunion following the finale, such as where it will be located and what its theme might be, as he usually does.

Of course, there are already rumors about what next season of Survivor may bring floating around the Internet if you're curious, but nothing of the sort has been officially announced by CBS just yet. But if you ask me, it seems like the show is almost running out of ways to group its castaways into tribes when they first enter the game because it's kind of done it all already. This season, Survivor pitted Gen-Xers against Millennials, but in the past, the show has split the contestants up by gender, ethnicity, occupation, and primary attribute ("brains," "brawn," or "beauty").

So in case CBS needs any help brainstorming what to do with the tribes for subsequent seasons of Survivor, I've got a few ideas that the reality competition hasn't tried yet.

Our country is as polarized politically as ever these days, so why not reflect the cultural climate on an upcoming season of Survivor by separating the tribe members based on political affiliation, i.e. have one tribe full of Democrats go up against another tribe full of Republicans. I doubt CBS would ever want to get that political with Survivor, which has never really been a provocative series in that way, but if the network did, oh boy, what a merge that would be!

At this point, now that there have been 33 seasons of Survivor, many of the people that come on the show have been watching it for years and consider themselves superfans. Whether or not their extensive knowledge of the game helps them succeed in it in real life is up for debate, but they certainly would come into the competition ready to play hard.

Famous faces have popped up on Survivor in the past, such as former Dallas Cowboys head coach Jimmy Johnson and actress Lisa Whelchel, best known for playing Blair Warner on The Facts of Life. However, there has never been a proper celebrity edition of Survivor, and I would totally be up for that. Sure, something of a celebrity installment of Survivor, I'm a Celebrity...Get Me Out of Here!, made its way to the States from the United Kingdom for a couple of seasons in the 2000s, but I think a celebrity edition of Survivor would be less campy, more cutthroat, and altogether more entertaining.

Watching Taylor and Figgy strike up a romance during this season of Survivor, it made me think of how few castaways we've seen get flirty on the show over the years, especially when you look at similarly-formatted reality competitions like Big Brother, where at least one showmance always seems to spring up with each new season. So why doesn't Survivor put a bunch of singles together into tribes and see what happens as they vie for that million bucks? Yes, it does sound a lot like Bachelor in Paradise, but with each contestant actually fighting for survival, in addition to the prize money, the stakes are oh so high.

No one ever wants to be the first person voted off of a new season of Survivor. I mean, can you even remember who was the first to depart this season of Survivor (sorry, Rachel!)? So why not give these castaways who had super short runs on the show a second shot in the hopes that they'll majorly redeem themselves? And since no one usually remembers the first contestant to get the boot, it'll practically feel like a whole new cast.

Here's hoping Survivor has some equally interesting ideas in store for Season 34.