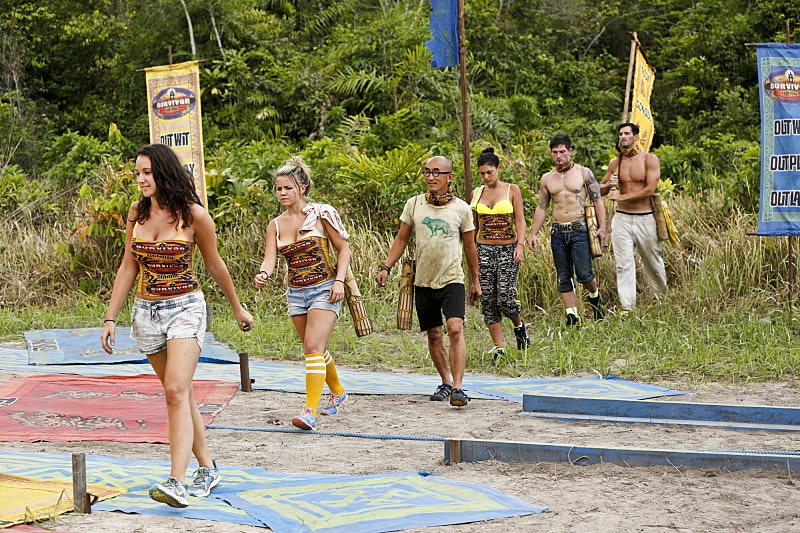 OK, I'll say it: Survivor was especially tough this season. On top of the three mandated evacuations for contestants with heat stroke, infections, and um, gastroenterological distress, the castaways were in near-constant discomfort or danger. I mean, an actual bug crawled inside a contestant's ear and did a little recreational digging. With that behind us all, hopefully when Survivor returns for Season 33, things will be a lot easier for everyone involved.

Although who am I kidding? It's Survivor — things are gonna get messy. Right now, fans are on the precipice of uncovering the winner of Season 32, with Aubry, Michelle, Tai and Cydney fighting it out for the "Sole Survivor" crown, and while we still have to wait to see how everything shakes out, speculation for next season is already heating up. Survivor was renewed for a 33rd season back in March, which means the lucky chosen castaways are probably filming right now in order to hit viewers' televisions by late September.

As for where next season will be set, it's been reported by HNGN that the new Survivor location will be Fiji, specifically the Mamanuca Islands. This potential change comes after a difficult two seasons in Cambodia, and it'll be interesting to see how it goes. Casting-wise, Inside Survivor has reported that the upcoming season's cast will allegedly include 20 fresh faces that include YouTuber Mari Takahashi and NYC improv-er Zeke Smith. Any other details at this point are pretty slim, but after 32 seasons of the show, it's pretty easy to know what else you need to make a killer next installment, such as:

Survivor has had the market cornered on tense and ingenious competitions for quite some time, but after so many seasons, things can get a little boring. Probst and the Survivor crew have got to make sure to keep it interesting with a little high stakes challenges. (A little tip: mud crawls are always a good idea.)

Rob and Amber sort of set the stage back in Season 8 for this one, but as fans have seen time and time again, there's nothing that brings people together like almost dying on an island. Seriously, Survivor has become a better place for finding love than The Bachelor . Is anyone surprised?

Sure, fierce competition between tribes is the bread and butter of Survivor drama, but it's the tense times inside the tribe that make for A+ television.

Drama is all well and good, but sometimes watching the beginnings of a fabulous friendship is just as rewarding. Let's hear it for camaraderie!

Nothing keeps the reality TV world churning like a good ol' unpredictable villain, and the best thing about Survivor is that the role can change from week-to-week as alliances disintegrate and twists are added. Trust no one.

In the early seasons of Survivor, conditions were so bad I was seriously concerned the castaways could actually die. Things have thankfully gotten softer since then, but there's nothing like a little danger to keep things interesting.

Even if it's one of your favorite castaways being sent home, the surprise of a blindside is really hard to beat. Just look at that face.

Every great Survivor season has a great theme. Nothing sunk the original Survivor: Fiji like their ludicrous "haves" and "have-nots" theme that left one tribe with a tricked-out campsite and the other tribe with close to nothing. Brutal. Of course, there's no word yet as to what next season's theme will be, but anything would be an improvement over the very silly "Brains vs. Brawn vs. Beauty" theme of Kaoh Rong .

I'm already warming up my DVR for Season 33. This is gonna be good.