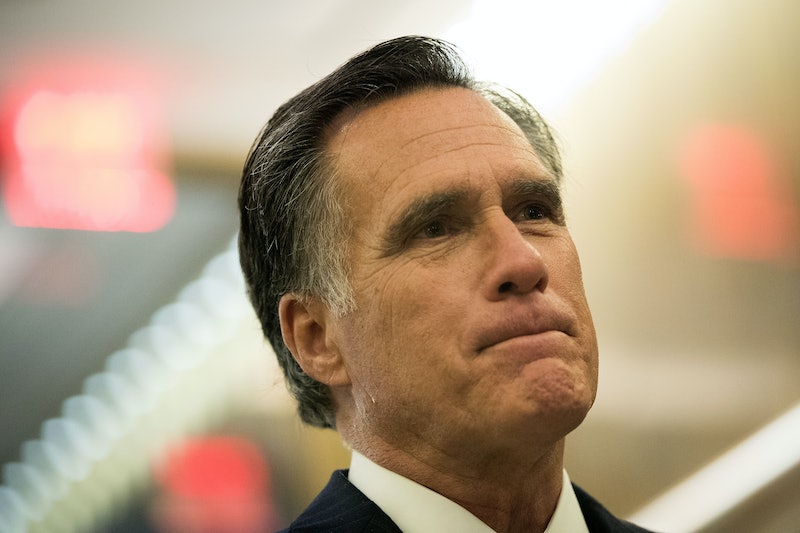 Not long ago, Donald Trump interviewed Mitt Romney for the position of Secretary of State. But it doesn't look like he's going to pick him — and according to one of the president-elect's confidants, the only reason Trump interviewed Romney for the position was to "torture" him. The former Massachusetts governor was a staunch critic of the real estate tycoon during the campaign, and according to Trump ally Roger Stone, Trump decided to "toy with" Romney by stringing him along.

"Donald Trump was interviewing Mitt Romney for Secretary of State in order to torture him," Stone said in an interview with Alex Jones Monday. "To toy with him. And given the history, that's completely understandable. Mitt Romney crossed a line. He didn't just oppose Trump, which is his democratic right, he called him a phony and a fraud. And a con man. And that's not the kind of man you want as Secretary of State."

If true, this is surely news to Romney, who twice had dinner with Trump during his "interviews" for the Secretary of State position. As Stone pointed out, Romney did indeed call Trump a phony and a con man during the campaign, and was one of the few Republicans to remain steadfast in his criticism of Trump throughout the campaign.

However, Romney started singing a much different tune once he believed that he might be the next Secretary of State.

"I had a wonderful evening with President-elect Trump. We had another discussion about affairs throughout the world and these discussions I've had with him have been enlightening, and interesting, and engaging," Romney gushed after his second dinner with Trump. "He won the general election and he continues with a message of inclusion and bringing people together and his vision is something which obviously connected with the American people in a very powerful way."

Bloomberg's Jennifer Jacobs reported Monday that Trump has told Romney he isn't getting the job, but Trump's transition team hasn't confirmed or denied Stone's allegation, and a spokesperson for Trump didn't respond to Bustle's request for comment. However, it certainly would be in character for Trump to do what Stone said he just did. Just ask Chris Christie.

You'll recall that Christie was the first big name Republican to endorse Trump, all the way back in February. Given how toxic Trump was at the time, and that his lock on the nomination wasn't at all assured, Christie took a considerable political risk in doing this. But Trump didn't reward the New Jersey governor for his loyalty. Instead, he belittled Christie at every opportunity ("No more Oreos," he said to Christie's face at a public event), passed him up for the job of vice president, and eventually gave him the consolation prize of transition team chairman — only to remove him from the position three days after the election and replace him with Mike Pence.

It's hard to have much sympathy for Romney or Christie. Both men made it crystal clear that they found Trump to be utterly unacceptable and unqualified for the presidency, then abruptly became Trump fanboys after realizing they might be able to get something for themselves out of a Trump presidency. There's not much honor in that, and Romney's willingness to heap praise upon Trump in exchange for a potential job in the State Department makes his earlier criticisms of Trump seem a lot less authentic.

Alas, Romney may not be the last Republican to bow at Trump's feet only to get spat on in return. Carly Fiorina has been one of the strongest GOP critics of Trump, and that makes sense, given that he once implied that she was too ugly to be president. But on Monday, The New York Times reported that Trump is considering Fiorina for Director of National Intelligence, and wouldn't you know it — the same day, Fiorina met with him at Trump Tower, called him a "champion" afterwards and told reporters about all of the "really cool stuff" he apparently has in his office.

"All of these athletes have given him all this incredible memorabilia," Fiorina fawned after the meeting. "I was particularly taken by Shaq O'Neal's shoe, which is huge!"

It may be too late for Fiorina to escape the same fate as Romney and Christie. But this ought to serve as a warning for the very few Republicans who've held strong in their criticisms of Trump. Jeb Bush and John Kasich, I hope you're paying attention.