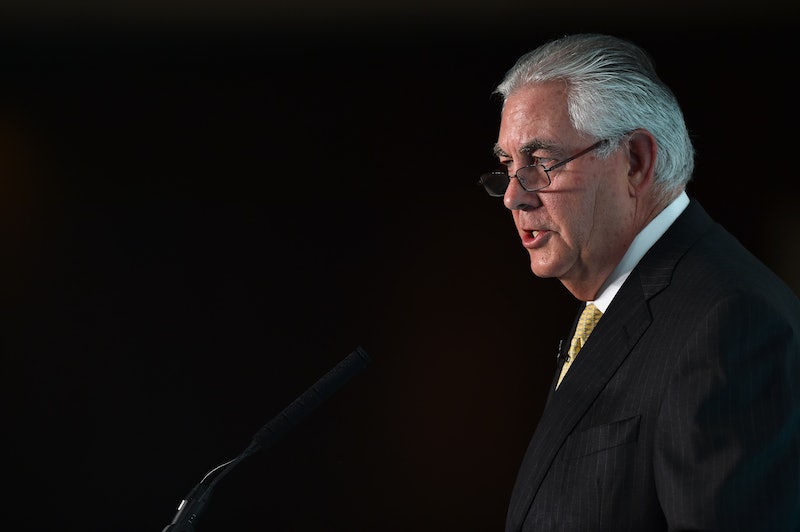 On Monday, The New York Times reported that Donald Trump had nominated Rex Tillerson as the president-elect's Secretary of State. Along with GOP stalwarts like Mitt Romney and Rudy Giuliani, not to mention candidates like David Petraeus and Bob Corker, Trump had considered Tillerson for the role for the last several weeks. Tillerson is notoriously friendly with Russia and Russian president Vladimir Putin, who had given Tillerson the Order of Friendship on behalf of the country. As the head of Exxon, Tillerson has spent years nurturing a close business relationship with Russia.

After this past weekend's revelation from the CIA that Russia sought to hack the 2016 election, reportedly to ensure that Donald Trump would triumph, tensions are particularly high between the two countries. A bipartisan group of legislators had urged Trump to give serious thought to nominating a Russian ally like Tillerson as the nation's secretary of state. This included 2008 GOP nominee John McCain, who said that Tillerson and Putin's ties were "a matter of concern."

In recent days, Trump had reportedly considered Romney and 2016 Republican candidate Carly Fiorina for top-level positions. Romney said in a Facebook post Monday evening that he was not the president-elect's pick for the Secretary of State role, writing:

It was an honor to have been considered for Secretary of State of our great country. My discussions with President-elect Trump have been both enjoyable and enlightening. I have very high hopes that the new administration will lead the nation to greater strength, prosperity and peace.

Fiorina, who was famously described as "ugly" by Trump during primary season, become the latest once-rival of Trump's to be considered for a cabinet position this week.

On CBS' This Morning on Monday morning, former Trump campaign manager Kellyanne Conway discussed Tillerson and Putin's closeness. "It's not like Vladimir Putin and Rex Tillerson are pounding down vodka at the local bar. They're not intimate friends, but they deal with each other through business interests," Conway clarified, perhaps in anticipation of Monday night's announcement.