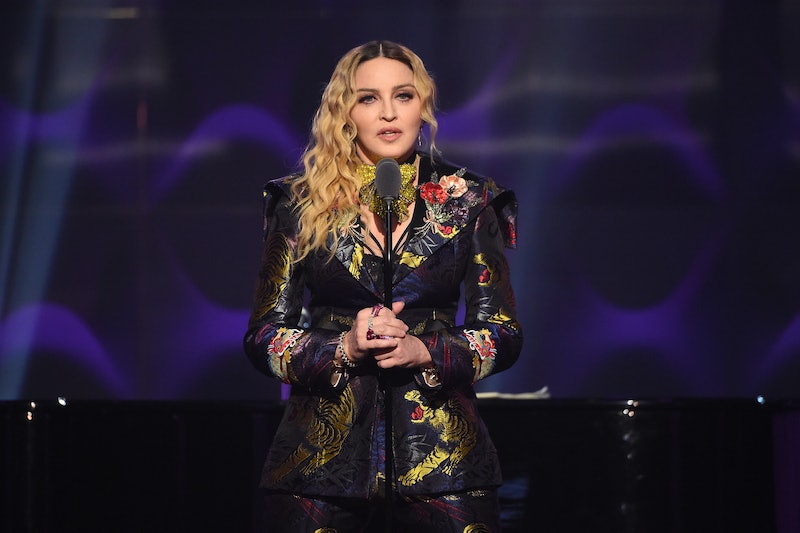 Madonna, oh, legendary Madonna — she released her first single, “Everybody,” in 1982, and she hasn’t looked back since. Talk about an artist who has constantly redefined herself, her look, and her sound — she’s like a phoenix rising from the ashes. Of course, she’s had her share of troubles, too. Madonna has been called every name in the book, vilified for her opinions and her openness about her sexuality. Well, she’s all the better for it, and Madonna’s speech at the Billboard Women in Music Awards urged women to get out there and create their own community.

Interestingly enough, Madonna admitted that she didn’t think about feminism at the beginning of her career. “When I first started writing songs, I didn’t think in a gender-specific way,” she said. “I just wanted to be an artist. I was, of course, inspired by Debbie Harry, by Chrissy Hynde, and Aretha Franklin. But my real muse was David Bowie — he embodied male and female spirit, and that suited me just fine.” Of course, once Madonna realized all of the rules that go into being a female musician, she knew that she would have to give a lot of middle fingers in order to be respected and taken seriously to do what she wants to do. And she did, but not before being called a bitch, a slut, a witch, an anti-Christ, etc. Those times, Madonna said, were the hardest, and she said, “I remember wishing that I had a female peer that I could look to for support.”

Madonna has certainly learned about feminism over the course of her career, and she had a strong message for women today.

“What I would like to say to all the women today is this — women have been so oppressed for so long, they believe what men have to say about them, and they believe they need to back a man to get the job done. And there are some very good men worth backing, but not because they’re men — because they’re worthy. As women, we have to start appreciating our own worth, and each other’s worth. Seek out strong women to befriend, to align yourself with, to learn from, to be inspired by, to collaborate with, to support.”

As Andra Day said earlier in the evening, women are not catty and competitive — the Billboard Women in Music Awards is a prime example of a room full of women that are being supportive of each other and are inspired by everyone else’s work. Madonna wished that she had someone — a female peer — to help her through the hard times, and so she is urging the women of today to find those peers and bond to them, because a community is much stronger than an individual.

More like this
We’ve All Had Bad Sex. Nona Willis Aronowitz Is Talking About It.
By Sophia Benoit
Jennette McCurdy’s First Kiss On 'iCarly' Didn’t Go As Planned
By Bustle Editors
Dr. Anna Pou Is Still Practicing Medicine After Facing Murder Charges
By Brad Witter
This New TV Show Revisits The Most Controversial True Story From Hurricane Katrina
By Brad Witter
Get Even More From Bustle — Sign Up For The Newsletter