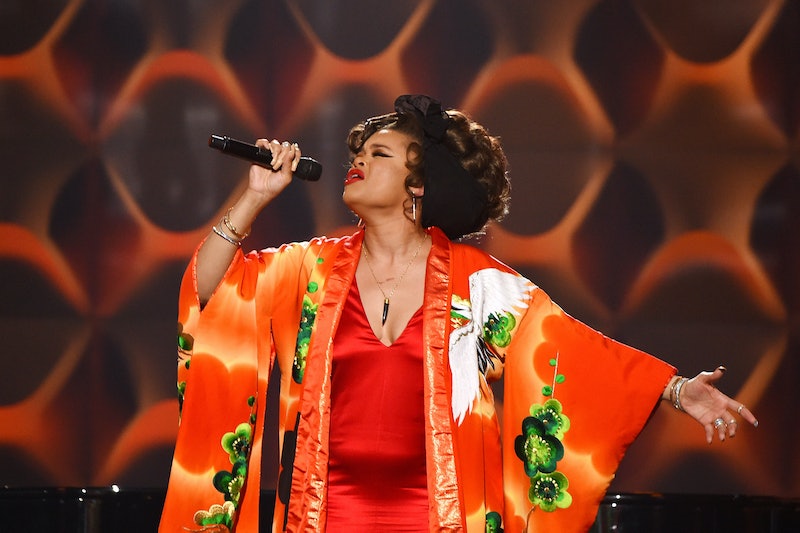 The Billboard Women in Music Awards highlights the women who are standing out and standing up for themselves in the music world — they’re trailblazers, songwriters, hit makers, and legends, and they’re all coexisting in one room together. Imagine that! Yes, folks — women aren’t always competing with each other or stealing each other’s boyfriends or pushing each other downstairs or whatever it is you think women do when they are competing for attention. They’re actually quite supportive of each other, and Andra Day thanked Billboard for highlighting this at the Women in Music Awards.

After a whole montage of famous women like Idina Menzel and Patti LaBelle talking about how amazing Day is as an artist, songwriter, and person, Day took the stage to accept her award. But before she thanked the people who helped her get where she is, she thanked Billboard for putting together the event in the first place. “Thank you for highlighting women who support each other and who love each other and for breaking the stereotype that women are, that they’re always competitive and that they’re always catty,” Day said. “This is a room full of women that are powerhouses and they support each other, and I love that. It motivates me. It inspires me. It gives me hope.” It gives me hope too, Andra.

Women are constantly plagued by the notion that they’re in competition with each other, and it’s something that been proliferated in our society, like there’s only room for one woman at the top of every musical chart and organization. That’s called the status quo, people, and it’s time to cut bait and do away with it. There is actually room for plenty of hardworking women to do whatever they want, and Day recognizes this. That whole room of Billboard recipients is proof that women can be friendly and ambitious and successful all at the same time.

More like this
Beyoncé & Madonna’s “Break My Soul” Remix Honors A Group Of Black Icons
By Stephanie Topacio Long
Kim Kardashian & Pete Davidson’s Reported Breakup Has Twitter Running Wild
By Brad Witter
Kim Kardashian & Pete Davidson’s Relationship Timeline From Start To Finish
By Jordyn Tilchen and Bustle Editors
Who Is Bad Bunny Dating? Gabriela Berlingeri's Vocals Are Featured On His Song "En Casita"
By Radhika Menon
Get Even More From Bustle — Sign Up For The Newsletter