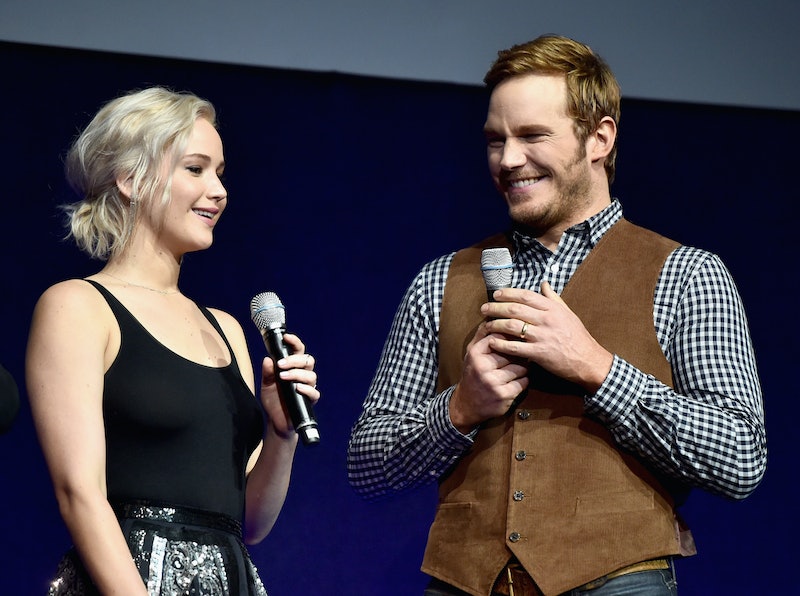 Well, it's official: something good has actually come out of 2016, and as it turns out, it's the friendship between Jennifer Lawrence and Chris Pratt. And if you were already excited to see their new movie, Passengers, this is about to get you even more pumped. So you know how Pratt has been cutting Lawrence out of photos on Instagram? Now, she's getting back at him, and her revenge is absolutely perfect. On Monday night's edition of Jimmy Kimmel Live, Lawrence pranked Pratt by drawing graffiti over his face on a poster for their movie, and if you ask me, that's way worse than getting cropped out of a few pictures.

It all started when Kimmel brought up Pratt's recent Instagram posts. Lawrence explained that he acted like he was trying to promote the movie, and later, she found out she wasn't actually in any of the photos. And since Kimmel is the king of prank wars, it wasn't surprising at all that he offered her the opportunity for payback, and they immediately hit the street with a ton of spray paint so they could tag a bus that featured a giant version of Pratt's face on a Passengers ad.

Lawrence drew a heart by her face and gave Pratt a mustache and a unibrow, and Kimmel pitched in by changing Passengers to just "ass" and drawing an arrow to Pratt's face. And after a little more editing that turned "Chris Pratt" into "Chris Rat," their masterpiece was complete, and I'd say this definitely makes them even.

I've always loved Lawrence and Pratt separately, but their pranks are making me love them as a duo even more. I've already been looking forward to seeing Passengers, but knowing that they've formed a friendship since filming makes me even more convinced that it's going to be just as wonderful as I think it's going to be.

And now that I've seen them in action, I'm really hoping that their prank war continues. Pratt, I'll be refreshing Instagram. Your move.

More like this
Jennifer Coolidge Needs 'Legally Blonde 3' To Happen So She Stops Getting Hot Dog Jokes
By Jake Viswanath
Taylor Swift Wanted To Be In 'Twilight: New Moon,' According To Its Director
By Grace Wehniainen
Jonah Hill Explains How His Anxiety Attacks Will Change The Rest Of His Career
By Grace Wehniainen
Florence Pugh Won’t Discuss Harry Styles Sex Scenes In 'Don’t Worry Darling'
By Grace Wehniainen
Get Even More From Bustle — Sign Up For The Newsletter