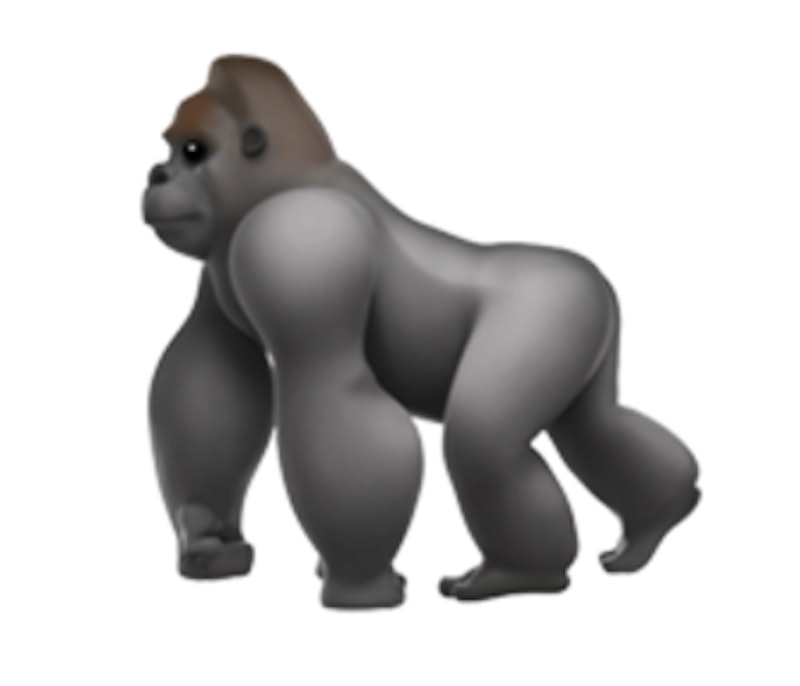 Yesterday, Apple released iOS 10.2, an update that includes 72 new emoji. There are a number of animals in that bunch, including a gorilla. Given the strange popularity of Harambe memes this year, it should come as no surprise that the internet is asking, “Is the gorilla emoji Harambe?” The short answer is “No.” The new gorilla emoji is not Harambe. Obviously, if you wanted to have a conversation about Harambe via text, there’s nothing to stop you from using the gorilla emoji as a symbol for that particular gorilla, but the timeline according to which the emoji was created shows that it was not conceived as a tribute to or symbol of the gorilla that was killed in Cincinnati in May.

If you’ve been living under a rock this year (which, given the way 2016 has gone, I wouldn’t blame you), you might need a refresher on Harambe. On May 28, the 17-year-old Western lowland gorilla was shot and killed at the Cincinnati Zoo after a 3-year-old child climbed into his enclosure. Harambe became agitated and moved the child around; zoo officials decided to kill the gorilla out of fear that he might injure or kill the child, a choice that proved to be highly controversial. Many people were angered by the zoo’s killing of the gorilla, and there were a number of protests and tributes dedicated to Harambe in the days following the shooting.

The internet being the strange, strange creature that it is, tributes to Harambe took on a life of their own, and Harambe became what has been described as the “meme of the summer” (and since it still seems to be going strong, that might need to be upgraded to “meme of the year”). Harambe memes have often taken the form of ironically over-the-top tributes to the gorilla. Some versions are simply irreverent, some offer social commentary on the way people value human and animal life, and some indulge in purposefully immature humor (including a call for men to show their genitals as tribute to the gorilla). Some of these Harambe memes have been criticized as offensive and racist. (You can check out an interesting account of the meme’s trajectory at Vox.)

Given Harambe’s continuing pervasiveness in popular culture (for better or worse), it’s only to be expected that social media users would connect the new gorilla emoji to the meme. However, the gorilla emoji is not Harambe. Twitter users who are suggesting that the emoji was created as a reaction to the killing or the meme underestimate how long it takes for a new symbol to enter the emoji lexicon. As the Telegraph points out, it can take two years or more for an emoji to go from the proposal stage to actually being available for use.

Emoji don't happen on the fly. To create an emoji, someone first has to submit a proposal to the Unicode Consortium. According to the Telegraph, a Unicode technical officer assesses the proposal, and, if it’s approved, sends it on to a committee. If the committee approves, Unicode encodes the new emoji, and then passes the baton to companies like Apple, Microsoft, and Google to design their own versions. Then those companies will eventually release the completed emoji for use.

That seems to have been the trajectory of the gorilla emoji. Unicode documents show that a proposal for a gorilla emoji was submitted in April of 2014, more than two years before the killing of Harambe. The gorilla emoji was approved and added to the Unicode 9.0 update in October of 2015, and Unicode released the emoji (along with more than 70 others) this past June. It’s only now that the emoji has become available to Apple users.