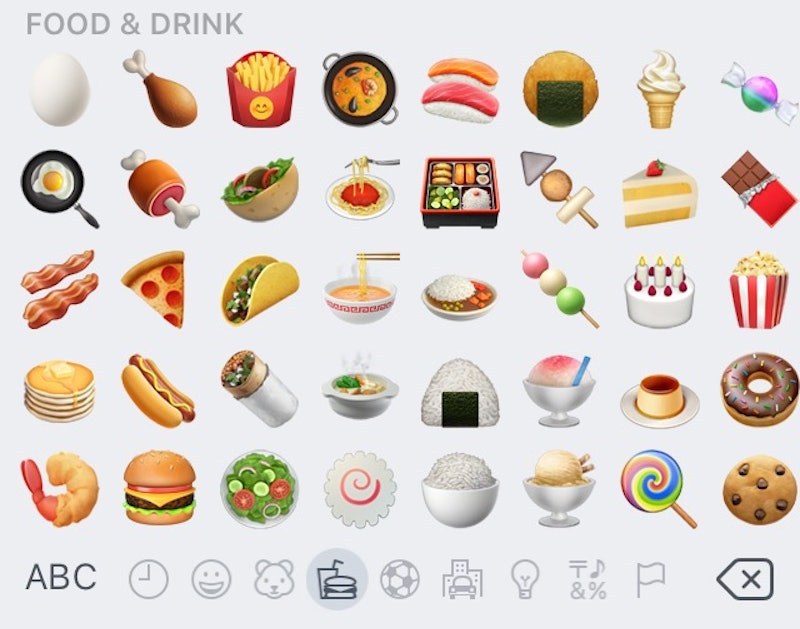 If you've updated your iPhone or iPad lately, you'll probably notice a lot of upgrades — particularly when it comes to your emoji selection. That's right: iOS 10.2 is here with new emoji, and they're basically everything you've ever wanted in life. From more realistic images to greater gender variety to new emoji all together, our texting game has received a major facelift. With our dependence on emoji in everyday conversation, the latest iOS update is more than welcome. So, what exactly might you see? Install the new update on your phone, and prepare for some magic.

Some of the new additions include a clown face (because 2016 was a great year for clowns, yes?), David Bowie-ish rockers, men twins, a man doing the hair flip, a fencer, water polo players, a fist bump, crossed fingers, a gorilla, an owl, bacon, and avocado. (Honorable mention to the peach emoji. It had already been updated to return to its previous booty-ish appearance, but I feel it deserves one last shout-out.) This barely scratches the surface, too. Perhaps the biggest change was to the professions, which added a number of new emoji — nearly an entire page's worth. Spend some time here — there's lots to look at. An astronaut? A farmer? Yes, please.

Perhaps the most exciting part is how inclusive these new emoji are. There are more options for both men and women, and you can find your emoji in a variety of skin tones. Women are a much bigger part of the professions section now, where they are detectives, firefighters, and plumbers, among other roles.

This new update brings with it hundreds of new and redone emoji, and there are no signs of slowing down. With iOS 10 alone came new options that predicted an emoji you might like based on what you were typing (for instance, if you text "crown," the crown appears — genius), plus emoji that appear three times bigger when you send them as their own text. With this update that makes emoji more detailed, realistic, and inclusive than ever, texting just got even more entertaining. As a friendly heads up: I didn't see a notification of the software update, but it was surely there. Go under Settings > General and look for the update today.