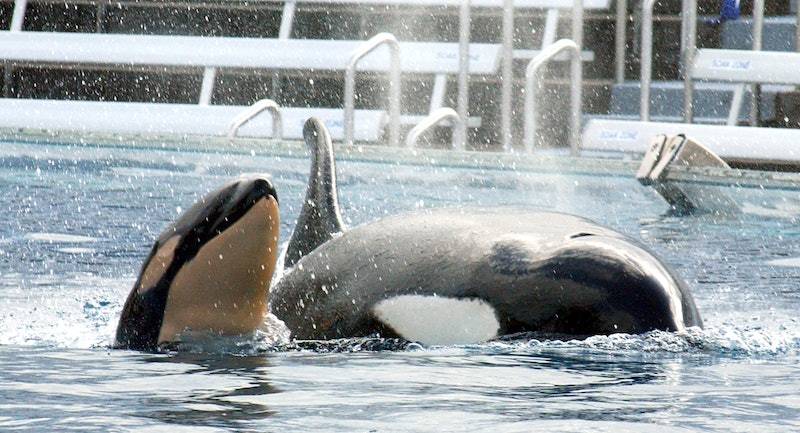 If you thought captured orcas had it rough, well, it just keeps getting worse. A document obtained by Buzzfeed has revealed that Seaworld gives their orcas psychotropic drugs, likely to combat the stresses and accompanying aggressions of their lives. The drug in question is benzodiazepine, which contains two common human medications: Xanax and Valium. Attendance at SeaWorld is already down 13 percent this year, to no one's surprise.

The news comes alongside with the public relations nightmare SeaWorld is struggling with over the popular documentary Blackfish , which paints a harrowing picture of their orcas' lives in captivity. The revelation comes by way of a sworn affidavit in a legal dispute between SeaWorld and rival Marineland over the acquisition of Ikaika, a highly-valued orca scheduled to be sent to SeaWorld.

The veterinary records show that orcas at SeaWorld are given psychotropic drugs to stop them from acting aggressively towards each other in the stressful, frustrating conditions in which they’re confined instead of funding the development of coastal sanctuaries - the only humane solution.

The issue of aggression and stress amongst SeaWorld's orca population is the central topic in Blackfish, which examines the 2010 death of trainer Dawn Brancheau by show-orca Tilikum. Through accounts and testimonies from her fellow trainers, the film theorizes that Brancheau's death was the result of pent-up aggression by Tilikum as a consequence of his captivity — held in a small cage, forced to earn his food through grueling performances, and isolated from his family.

The documentary revealed that Tilikum had been implicated in two other deaths prior to hers, but SeaWorld nonetheless continued to subject him to this dismal lifestyle, and subject his handlers to the dangers that came with it.

As such, it's not a huge leap to suggest they'd attempt to paper-over the problem by drugging the whales. In a statement, SeaWorld spokesman Fred Jacobs defended the company's practices:

Benzodiazepines are sometimes used in veterinary medicine for the care and treatment of animals, both domestic and in a zoological setting. ... The use of benzodiazepines is regulated, and these medications are only prescribed to animals by a veterinarian. Their use for cetacean healthcare, including killer whales, is limited, infrequent, and only as clinically indicated based on the assessment of the attending veterinarian. There is no higher priority for SeaWorld than the health and well-being of the animals in its care.

Jacobs' statement makes one key error: It suggests orcas by nature often need to be sedated, which isn't true. Orca populations in the wild are not prone to these kinds of aggressions, stressors or moments of violence towards human beings. Quite the contrary — despite the "killer whales" label, there are no known instances of orca-human attacks in the wild.

If SeaWorld truly had "no higher priority" than "the health and well-being" of its animals, they ought to consider a very simple solution: close up shop. Since they seem to find that idea completely out of the question, then maybe, just maybe, the profit motive ranks a little higher on SeaWorld's priority list than they're letting on.

More like this
Read Dan Levy's Heartbreaking Message After The Club Q Shooting
By Stephanie Topacio Long
Iran Has Issued A Death Sentence Over Mahsa Amini Protests
By Catharina Cheung, Darshita Goyal and Maxine Harrison
If You Have Pets, You Probably Don't Realize You're Making These Common Mistakes
By Mackenzie Edwards
Kate Middleton Shares The Key To Building A "Happier Society" In A New Op-Ed
By Stephanie Topacio Long
Get Even More From Bustle — Sign Up For The Newsletter