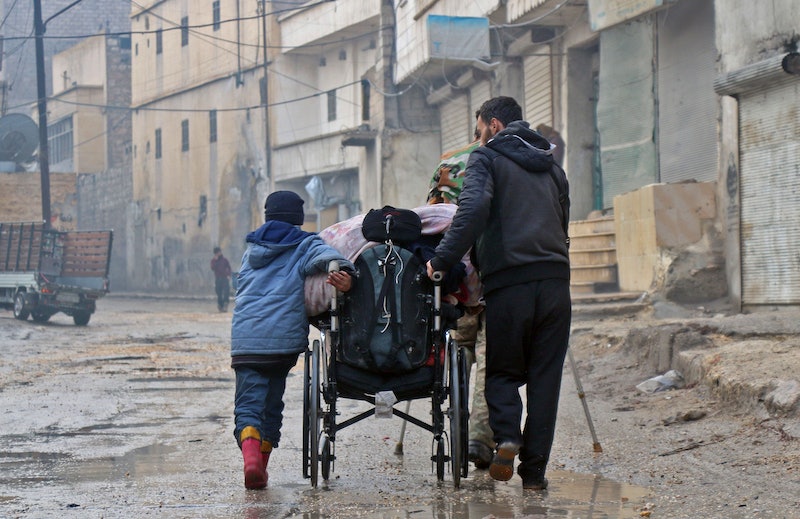 The embattled Syrian city of Aleppo suffered more devastating bombings and ground attacks Monday, in what UN spokesman Jens Laerke called a "complete meltdown of humanity." More than 80 civilians were reportedly slaughtered, shot on sight by pro-regime forces entering the city to reclaim it from rebels for President Bashar al-Assad. The Syrian people need your help in this ongoing human rights crisis, so here's how you can donate to help the citizens of Aleppo.

The Battle of Aleppo has been raging for more than four years, but this might be its most desperate moment since the war began. Aerial footage from October revealed the breadth of the physical destruction, which has undoubtedly worsened since Assad-allied Russia promised to continue the bombings until the rebel forces leave. The bombings, along with the reportedly indiscriminate government troops, have caused an unknown number of civilian deaths. "There is no total number of casualties in Besieged #Aleppo today, all streets & destroyed buildings are full with dead bodies. It's hell," tweeted The White Helmets, a civilian volunteer rescue organization in Aleppo that was recently profiled in a Netflix short documentary. "We hear children crying, we hear calls for help, but we just can't do anything. We're being bombed continuously. #SaveAleppo."

It's painfully clear that the people of Aleppo need help, but it can be intimidating to figure out where to start. There are plenty of organizations that you can donate to for Aleppo relief, but one especially important one is Islamic Relief Worldwide. Started by Muslims students based in the U.K., it draws support from the Muslim community, and it's a really powerful example of the humanism and charity that the religion really represents. You can donate specifically to their Syria Crisis Appeal, but they're also currently working on food relief in Yemen and fighting the religious persecution of Rohingya Muslims in Myanmar.

Another group to give to is Sunrise USA, an American organization that was established in 2011, when the Syrian Civil War first began. Sunrise is kind of a catch-all organization with no one hyper-specialized purpose — it provides food, education, medical care, and orphan sponsorship to Syrians who are either still living in country or internationally displaced. They have campaigns for each of the many services they work to provide, but right now, you're best choosing either the Emergency campaign or the Most Needed option.

If you're in a position to donate, these are a few organizations through which you can help Aleppo. The issue needs the world's attention, and the only way to achieve that is money and awareness. If you have a particular charity that you typically work with or donate to, make sure to check them out on Charity Navigator, an organization dedicated to holding charities accountable for their expenditures and open sourcing information about effectively how your donation is spent. The most important thing is not to sit idly by without some kind of action.