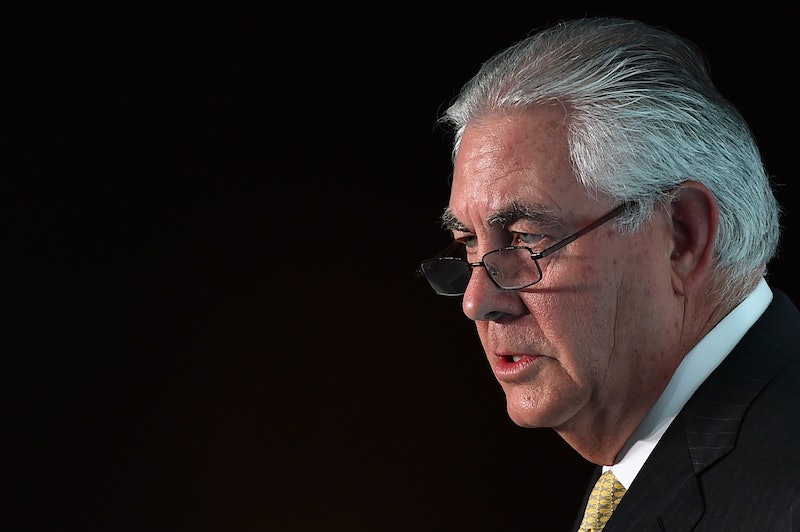 Donald Trump has finally done it: He’s found someone to nominate to his cabinet whom everybody hates. Trump’s pick for secretary of state, Rex Tillerson, CEO of ExxonMobil, is prompting liberals and environmentalists to set their hair on fire over his attitude toward the environment and his chumminess with Russian President Vladimir Putin. But this time, it’s not just the left that's foaming at the mouth. Tillerson is no favorite of the conservative world, either. Evangelical leader Tony Perkins issued a scathing rebuke of Tillerson on Monday, slamming him for supporting family planning organizations and using his influence at the Boy Scouts of America to get them to welcome gay scouts. So… at least that’s something, right? RIGHT?

Perkins put his grievances pretty succinctly in a post on the Family Research Council’s site, writing that Tillerson is guilty of “sending dollars to an abortion business that's just been referred for criminal prosecution and risking the well-being of young boys under his charge in an attempt to placate radical homosexual activists.” If you’re wondering what “abortion business” Perkins is talking about, that would be the not-for-profit organization known as Planned Parenthood. As for the young boys at risk, why, that’s because Tillerson "was instrumental in lobbying the Scouts’ board to accept openly gay youths," according to the Dallas Morning News. He was also the organization's president from 2010 to 2012.

Protests from this usually reliably obedient wing of conservatism might make Tillerson’s nomination more of an uphill battle than previously thought. The oil mogul is already facing consternation from some Republicans over his relationship with Putin.

On Sunday, Sen. Marco Rubio, who sits on the Foreign Relations Committee and will be a part of Tiller's nomination hearing, tweeted that “Being a ‘friend of Vladimir’ is not an attribute I am hoping for from a #SecretaryofState.” In a statement Tuesday morning, Rubio went further, saying in a statement that he had “serious concerns” over Tillerson’s selection.

Although Republicans have a majority in the Senate, it’s a narrow one, and if three of them bolt, that’s Tillerson’s nomination sunk. While that would be a pretty devastating blow to the president-elect, it’s not wildly outside the realm of possibility, especially given the hostility toward Russia among many senators.

To be clear, I believe there’s no comfort to be found here. Even if Tillerson is confirmed as secretary of state, there’s no guarantee that his personal politics on gay rights and abortion would supersede Trump’s (though pinning down Trump’s attitudes can be a bit squishy, so who knows). It just shows that Trump is going to do exactly what he wants. And that’s scary enough as it is.