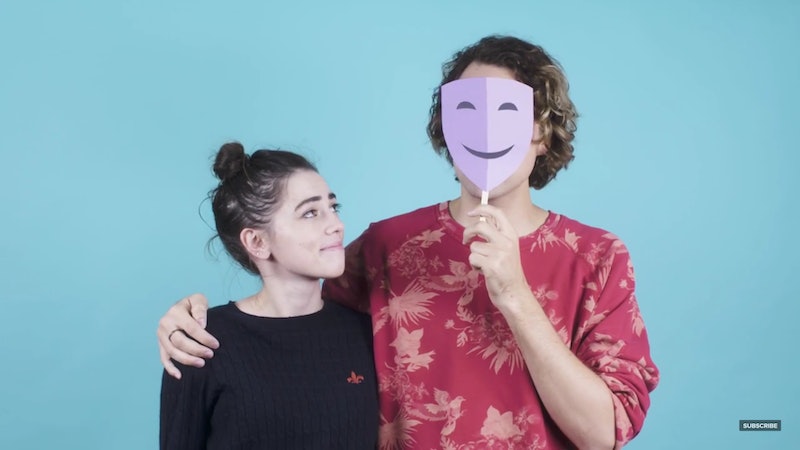 It happens to most of us at some point: We meet someone who seems like the perfect romantic partner (funny, smart, adventurous), but then that person starts acting like you don't exist or only calls when it's convenient for them. It may feel like the reason why we date jerks is our fault, but the truth is that a lot of jerks are pretty good at becoming popular — that is, until other people get to know them better and realize they're actually narcissists.

Narcissistic jerks tend to be charming, smooth, and self-assured — all things that can make any person seem likable. We tend to enjoy being around people who make us laugh and feel good when we're with them. Over time, however, narcissists eventually show their true colors. "The problem is that people who are truly narcissistic often have a hard time recognizing other people's subjectivity, recognizing other people as distinct humans," psychologist Alice Sohn, PhD, tells Bustle. "And so they may not tend to pay attention to your wants and needs and desires in the way that you'd like them to, and that can make it difficult to get along."

According to a 2015 study by psychologist Mitja D. Black, narcissistic traits were viewed as being positive until after three weeks, when people began to see those very traits as negatives attributes instead (what's seen as assertiveness at first began to look a lot like aggression after a while). In the sixth episode of Love, Factually , Bustle's original video series that explores the science behind relationships, we help to explain why we become attracted to jerks at first before ultimately realizing they're, well, jerks.

Here's the video below so you can find out for yourself:

1. Negative Attributes Start Out Being Positive

There are a lot of seemingly good traits of narcissists that eventually end up souring the opinions of others. For instance, arrogance can sometimes be mistaken for confidence, particularly when you first meet a person, according to counselor Aditi Verma. But at the same time, narcissistic jerks tend to be extremely vain and self-involved; as a result, they expect to get special treatment from other people.

"There's a lot of negative characteristics of a narcissistic person, but they all start from something really positive," Verma tells Bustle. Ultimately, what seem to be their greatest strengths are actually weaknesses in disguise.

When jerks meet new people for the first time, those relationships are going to be their main focus for a while. They'll put in a lot of time, money, and other resources to make sure they get on the good sides of their new friends. But once those new friends are hooked and the "chase" (so to speak) is over, real narcissistic jerks drop them like hot potatoes.

3. Some Jerks Are Hard To Spot

It's easy to pinpoint the type of jerk that brags about themselves to no end and acts like they're legendary (a la Barney Stinson). Then there are those narcissists that come across as extremely insecure, but still talk about nothing else but themselves and their problems, Sohn says.

"That's the kind of thing that you see with people who tend to feel bad about themselves, tend not to feel confident or to value themselves, but nevertheless are thinking of themselves all the time and unable to really focus on or commit to you because of their own self-involvement," Sohn says.