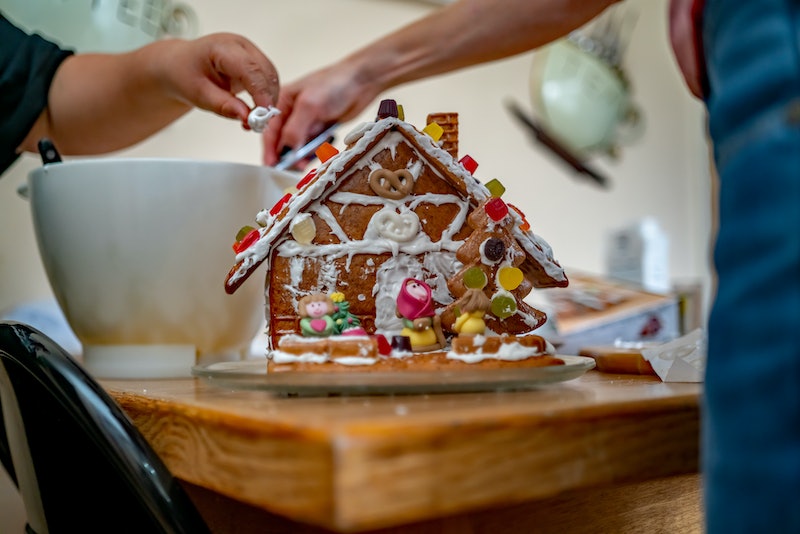 There is no question that gingerbread houses, with their candy-coated exteriors, are just as decorative as they are delicious. These edible edifices made from slab-like spice cookies held together by royal icing have become symbolic of the holidays, but the history of gingerbread houses themselves actually has little to do with Santa or his reindeer. In fact, this adorable, super sweet treat has a surprising origin that's much darker than you might think.

According to The History Kitchen via PBS, the seemingly innocent holiday confection is thought to date back to 16th century Germany, where ginger cookies called Lebkuchen were often enjoyed around Christmas. While ginger spiced cookies had been popular throughout Europe for quite some time, the idea of shaping the cookie into the form of a house is tied to the Brothers Grimm fairytale "Hansel and Gretel." In one scene from the dark children's tale published in 1812, two starving children stumble upon a house made entirely of bread covered in cakes, with windows made of pure sugar (sound familiar?). The delicious house turns out to be a trap set by a cannibalistic witch to lure unsuspecting children to their doom — a far cry from what we tend to think of as a classic holiday tale.

While "Hansel and Gretel" certainly increased the popularity of the edible house, author Tori Avey explains that "it is unclear whether or not gingerbread houses were a result of the popular fairy tale, or vice versa." Indeed, similar stories date back to periods of famine during the Medieval period.

Gingerbread itself, however, goes back even further. The first ginger root was farmed in ancient China to be used in medicinal treatments; however, ancient recipes for gingerbread can be traced back to Greece in 2400 BC. The spicy, warming root was brought to Western Europe during the 11th century Crusades, where it quickly became a sought after item for its strong taste and medicinal properties. Prior to the 15th century, the word "gingerbread," stemming from the Old French term gingebras, simply referred to "preserved ginger," notes Smithsonian Magazine.

While DIY gingerbread house kits can now be found in supermarkets and department stores across the country, decorated gingerbread has been a staple of celebration since medieval Europe. Hard cookies baked with ginger, molasses, honey and spices into the shape of animals, flowers, and royalty, became popular at fairs throughout medieval Europe. The cookies were so popular that some of these festivals even became known as Gingerbread Fairs. Queen Elizabeth I is widely credited with being the first to create gingerbread men, decorating elaborate cookies to resemble different foreign dignitaries visiting her court.

English colonists introduced gingerbread to the New World, where it was said to be enjoyed by the likes of Martha and George Washington, as well as served to honored guests such as the Marquis de Lafayette. Several recipes for gingerbread can be found in the earliest American cookbooks. The gingerbread house spread to the New World along with the popularity of the Brothers Grimm Fairytales, and now these confections have taken root as a holiday staple.

So next time you break off a piece of roof from your spiced cookie house, you're really taking a taste of an evil witch's house. Happy holidays!

More like this
The 8 Best Chew Bones For Puppies, According To A Vet
By Andrea Hannah
I Tried The $20 TikTok Viral Oishii Strawberries — Here's What I Thought
By Sophie Hanson
Trust Me, Pickle Martinis Are The New It Drink Of The Season
By Emma Carey
22 Movies On Netflix That Are Perfect For The Whole Family
By Bustle Editors
Get Even More From Bustle — Sign Up For The Newsletter