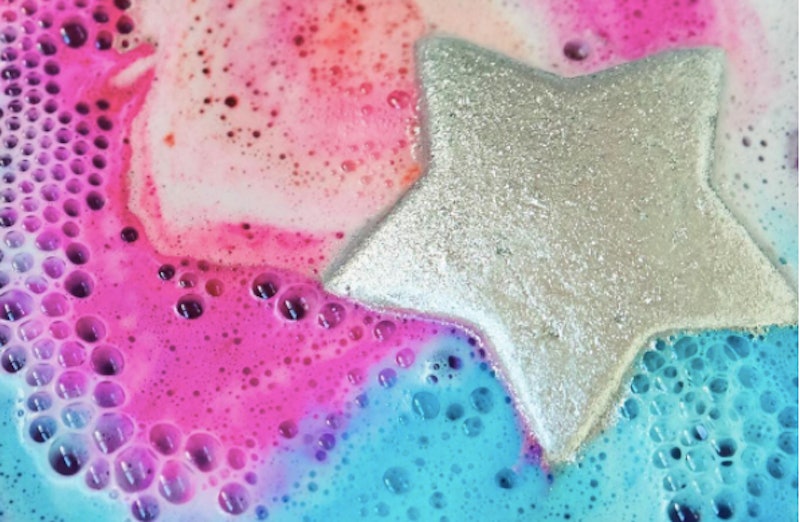 Walking into a LUSH Cosmetics store is an experience. You get incredibly friendly greetings, colorful products everywhere, and of course that glorious, glorious smell. So when I had a chance to take a tour of one of LUSH's largest factories in Toronto, Canada, I said, "Sign me up!" quicker than you can ask me if Drake was there, too. (He was not).

In case you didn't know, LUSH is the main producer of all those viral bath bomb videos you see on Instagram. So, yes, they are awesome. Even knowing this, though, I still wasn't sure quite what to expect when I toured the factory, and I had a lot of questions. Would there be a giant machine making bath bombs? Millions of those little stickers with animated faces on them everywhere? And, most importantly: What would I get to take home with me? When I got to the factory I realized pretty quickly that my experience was going to be different than whatever it was I expected. And so, so much better.

The first thing to know about the Toronto LUSH factory is that it is an operation in which every person has a very specific, very hands-on job. And some of those jobs are pretty darn difficult. I know, because I tried a few of them (and failed miserably). Every bath bomb — every. single. one — is molded by hand. There is no bath bomb machine, but there is an entire building that houses all the people making those bath bombs. Yes, a bath bomb building (plus a glitter room, which is superb).

The whole 278,000 square-foot space isn't the only LUSH factory in the world, but the specific one I visited creates every LUSH Shampoo Bar, Toothy Tab and Henna Hair Dye for North America. It's amazing enough that LUSH is so deeply committed to fighting animal testing, ethical buying, and handmade, super fresh products. But the factory just makes it that much cooler. The whole thing is a finely tuned machine, but you really have to see the pictures to understand what I mean. Oh, and yes, it smells even better than you would imagine.

Guys. There are entire rooms that house the glitter at the LUSH factory. The walls, floors, and pretty much every surface (including this clock) is covered in glitter. Yes, it is the best thing ever. LUSH actually uses non plastic, biodegradable glitter, which is made from seaweed and starches. Pretty cool, right? Definitely the prettiest glitter I've ever seen.

The separate glitter rooms are used in order to eliminate cross contamination within the factory. If you're lucky enough to get a job in one of these rooms, though, the downside (or upside?) is that you walk out covered in glitter pretty much every day. Sign me up?

If you're wondering if the people at LUSH as as hands-on as they make it seem in the store, the answer is yes. In this shot you can see how someone is literally using a giant hand mixer to make soap. They do this for every single batch.

And when you read on a label that something is hand-dipped at LUSH, the truth is that it really is hand dipped. Each and every deodorant bar. It's not easy work, but it smells really good. I can vouch for that.

Second to the amazing smells in the LUSH factory is the truly great assortment of colors. Seeing super bright soap (like above) up close and personal is nothing short of mind-blowing. Not even counting the glitters they use, LUSH uses over 60 pigments and dyes to achieve super saturated and unique color combinations.

If you think the bath bomb-makers just have a leisurely, great-smelling job, you'd be wrong (although it does smell really good in there).

If you're one of the bath bomb assemblers, your target could be anywhere from 700-1800 completed bath bombs in one day. It is a well-oiled machine.

See that box of avocados? That's not just a supply for company guacamole later. LUSH uses truly fresh ingredients. There are room-sized refrigerators that keep fruits, vegetables, and flowers fresh until they're ready to be used in products. In case you're doubting how much fruit they really use, you should know that in 2015, LUSH used 2 tons of avocados. AKA they are clearly my kind of people. You're not getting some watered-down, weird extract when you use a LUSH product — you're getting fresh, real produce. Pretty cool.

If there's anything I love in this life, it's giant, rolling trash cans full of glitter. This shot is some of the ingredients used in certain bath bombs and isn't it beautiful?

There is truly glitter everywhere you look at the LUSH factory — whether it's being stored, or, like in this photo, being used to coat bath bombs. Dream job, anyone?

It was a rather gloomy day when I arrived at the factory, but the first thing I saw when I arrived is, of course, the sunflowers. Yes, LUSH has a whole garden — complete with sunflowers — outside the Toronto Factory. Both LUSH factories (the Toronto location as well as the one in Vancouver) have permaculture gardens like this one that staff take care of.

The employees are allowed to pick ingredients from garden to take home, and every so often (if they grow enough of a certain ingredient), it actually goes into the products! Doesn't get any fresher than that.

At the factory, there are literally just stacks on stacks on stacks of bath bombs. Bath bombs as far as the eye can see. It is essentially the slightly more industrial-looking version of what I imagine heaven to be like.

11. The Finished Product When You Make Your Own

I made my own bath bomb at the LUSH factory, which is why I can speak to it not being the easiest task in the world. But what I can also say about bath bombs now is that the ingredients are fresh, everything is truly done by hand, and the end product is (as we all know), something really, really glorious. Here's a shot of the results after making my own bath bomb.

So I guess what you're really wondering now is if I'm quitting my job to make bath bombs full time? I mean, I'm not saying I haven't considered it. But in the meantime I'll just stick to using all the products and imagining that I have my very own glitter room.