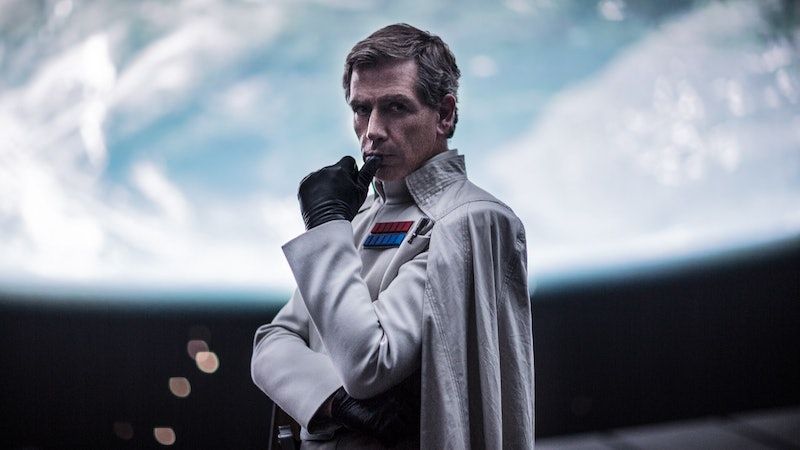 There are two big things to know about the Rogue One: A Star Wars Story villain, Director Krennic. First, that he is part of the Empire, and therefore is evil and should be feared. Secondly, that he wears the fiercest white cape anyone in the galaxy has ever seen. Other than that, Krennic, like most other new characters introduced in Rogue One, is very much a mystery to those coming into the theater. So, just who is Krennic from Rogue One ? Here's everything we know about Director Krennic going into Rogue One and what impact he'll have on the Star Wars mythology.

Director Krennic is the director of Advanced Weapons Research, according to his official character bio. The biography describes Krennic as "a cruel but brilliant man" who is "obsessed with the completion of the long-delayed Death Star project." Krennic, it seems, has staked his entire reputation (and, knowing Darth Vader, his life) on the Death Star. Krennic's drive and intense focus on the Death Star is laid out in full detail in the prequel book, Catalyst, released earlier this month. In the book, Krennic is described as power-hungry, cruel, and loyal to the Empire. When he becomes friends with Galen Erso, a budding genius scientist, he sees an opportunity to create a weapon that could solidify the Empire's rule over the galaxy — the Death Star.

Krennic's loyalty to the Empire does not necessarily extend to Darth Vader, something hinted at in Catalyst and no doubt explored in Rogue One. As reported by Yahoo!, Catalyst explains that Krennic sees the Death Star as "'a world of his own, replete with a power to rival that of the Emperor and Darth Vader.'" Desperate to make the Death Star a reality, Krennic manipulates Galen into working for him to create the planet-destroying laser, though Galen believes he's working on a clean energy source. In the meantime, Krennic struggles to maintain control of his Death Star project, with Grand Moff Tarkin breathing down his neck. Tarkin, fans will note, is the one who is in control of the death Star in A New Hope, suggesting that Krennic is not going to have the easiest time in Rogue One.

There is no doubt that Krennic is a villain, but rest assured, even the actor playing him, Ben Mendelsohn, has any intentions of even trying to outshine Darth Vader. "I don't think anyone is under any illusions that I'm out to topple Vader's place," Mendelsohn said in an interview with Indiewire. That said, Krennic will provide Star Wars with a different kind of villain, one that is more constrained within the Empire's political structure. "What Krennic is going to teach us and take us to is a deeper understanding and experience of the Empire [and] what goes on, as it were, with that," he said in the same interview.

It sounds like Krennic will be giving fans a lesson on what evil looks like without the Force or a mask. I can't wait.

More like this
Everything To Know About The Musical 'Joker' Sequel – & Lady Gaga’s Role
By El Hunt and Sam Ramsden
Stephen Graham’s Wife Plays A Vital Role In His Career
By Emma Madden and Sophie McEvoy
The 'PLL: Original Sin' Creators Say A’s Identity Will Be “Very Clear” By The Season Finale
By Alyssa Lapid
Does 'Locke & Key’s Ending Mean There Could Be A Season 4?
By Sophia Moore
Get Even More From Bustle — Sign Up For The Newsletter