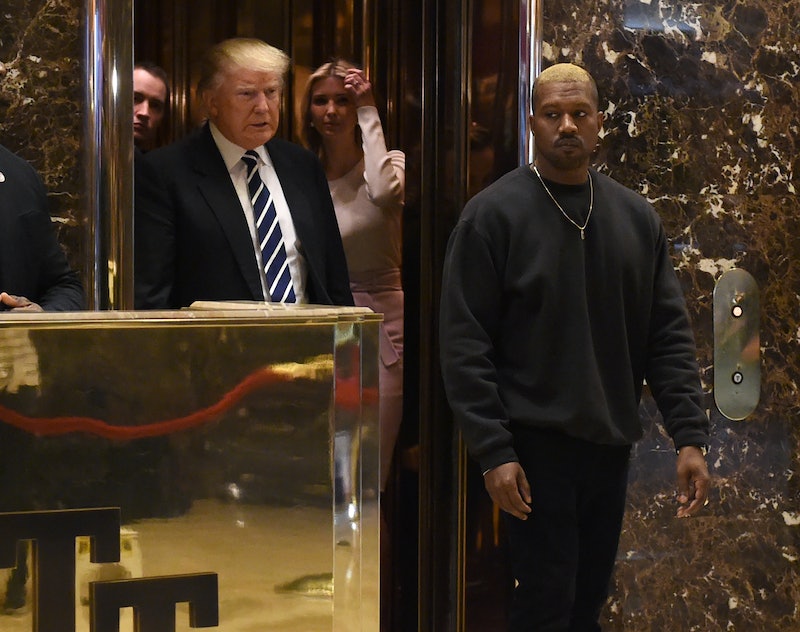 This isn't an episode of The Apprentice. Rapper Kanye West met with President-elect Donald Trump, reportedly about becoming "an ambassador of sorts" in an "entrepreneurship leadership role," according to The Hill.

The singer of "Gold Digger" and the owner of a golden penthouse met up in Trump Tower for the meeting on Tuesday morning. The pair then arrived back downstairs amid the media taking photos and videos. Trump told them that the pair "discussed life."

The move may be a starting point in a political career for West, who announced earlier this year at the MTV Video Music Awards that he wanted to run for president in 2020. While he may feel ready to take political office, he told a crowd at a concert in San Jose, California during a 25-minute tirade in November that he didn't vote, but if he had, it would have been for Trump.

After the meeting, West took to Twitter to go into more detail about what the president-elect and he talked about at Trump Tower. "I wanted to meet with Trump today to discuss multicultural issues," he tweeted. He sent out another tweet to clarify those issues, citing bullying, supporting teachers, modernizing "curriculums," and violence in Chicago, adding, "I feel it is important to have a direct line of communication with our future President if we truly want change."

These "multicultural issues" were likely part of a bigger theme which ABC reported on Monday from the Trump Tower meetings, called "African-American issues." Retired NFL players Jim Brown and Ray Lewis were named as guests on this day, in addition to West showing up.

This is West's second public appearance after being admitted to the hospital in November for exhaustion. Before he entered the hospital, he had canceled the rest of his Saint Pablo Tour, which included the show in San Jose where he talked for 25 minutes about Trump. This came as a surprise to his fans, especially since West donated $1,000 to President Obama in 2012 and $2,700 to Hillary Clinton in 2015 — not to mention the $15,000 he gave to the Democratic National Convention before the previous midterm election.

Surprisingly, Trump hasn't tweeted about the meeting yet. But he seemed pleased with talking to West, and told the media in the lobby of Trump Tower, "He's a good man. We've been friends for a long time."