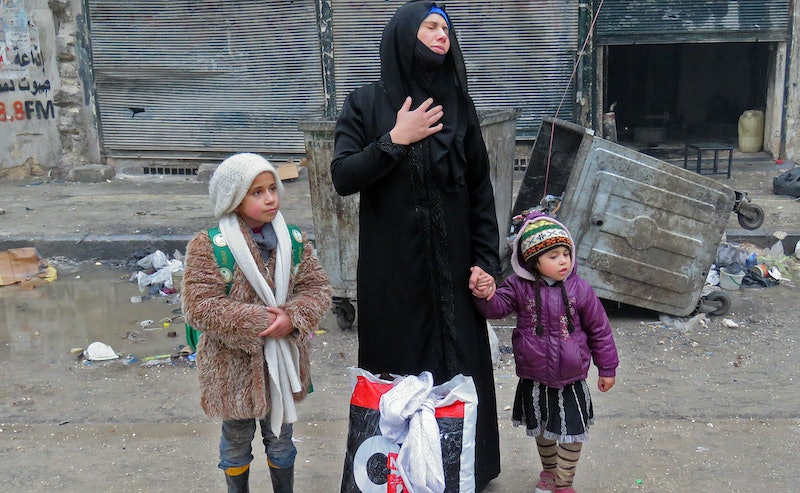 The Syrian Civil War, which has managed to hit another level of awfulness. On Monday and Tuesday, pro-Assad forces fiercely bombed Aleppo, affecting tens of thousands of civilians stuck in the city. Tuesday afternoon, Syrian rebel groups announced a tentative cease-fire along with Russia and Turkey that could allow many of the tens of thousands of opposition-aligned civilians still residing in the city to evacuate — necessary, as some reports from the United Nations indicate that government regime has been shooting civilians on the spot. The humanitarian cost has been devastating.

There's no way to sugarcoat this — there's not a lot we can do to really solve this problem. In electing Donald Trump, Americans have determined that United States intervention in Syria will likely not come (Trump stated during a debate in October that "Aleppo has basically fallen" and that he did not want to antagonize Russia over it). We must hope that the cease-fire holds, and that the worst of the brutality is over.

But there are real things you can do to help — perhaps not stop the carnage, but to aid those who have been victimized by the ongoing war. Amnesty International reports that a quarter of a million people have been killed as a result of the war, while more than half of Syria's population has been displaced. Here are a few things you might be able to do to help them.

In the midst of the brutality, the most consistent source of hope has been the White Helmets, a nickname for the Syrian Civil Defense. Formed in 2013, the group treats on-the-ground victims, helping with medical aid, evacuation, and reporting on events in Syria. They've saved tens of thousands of lives, even as they've lost hundreds of their own.

In addition to the White Helmets in Syria, there are numerous organizations that help refugees from the civil war (and from other international crises) find new homes where they can be safe. Among the most powerful and effective organizations working worldwide are: The United Nations High Commission on Refugees, the International Rescue Committee, the American Refugee Committee, and Helping Hand for Relief and Development, which includes an option to donate directly to a Syria Humanitarian Assistance Fund.

While the United States has been less involved in the global refugee crisis than many other countries, there are still 10,000 Syrian refugees that have been admitted under the Obama administration. In a country that has been incredibly hostile towards many of them, these recent arrivals need support. Consider not just donating, but getting involved directly. The IRC has a program for volunteers to help refugees to integrate into American society. The White House offers potential ways to help on its website for different areas in the country.

Under Trump, it seems unlikely that the United States will admit more refugees. But even with the presidency set for the next four years, there is still a whole rest of the U.S. government that can be influence towards policy that might help Syrian victims. Contact your local and state government to see what can be done to help refugees settling in your area. Contact your Senator or Representative's office about trying to convince the federal government to accept refugees.

None of this seems like enough, but remember that doing something is better than doing nothing.