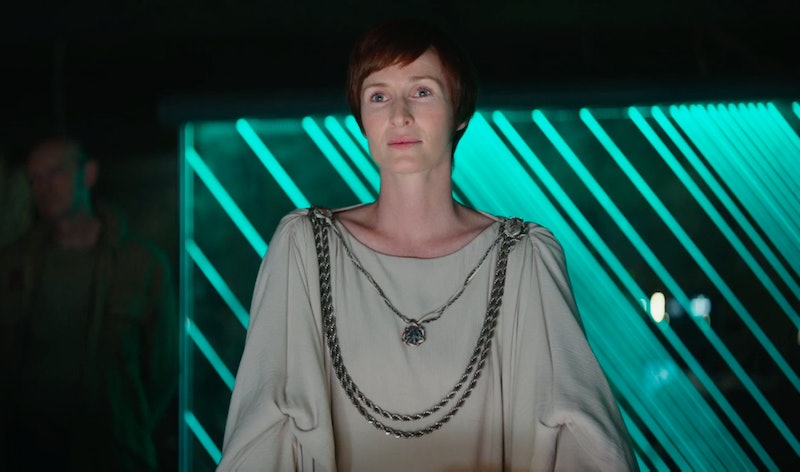 When the first trailer for Rogue One: A Star Wars Story first hit, one of the most exciting things about it was the reappearance of a beloved character from the original trilogy: Mon Mothma. Though she never got much screen time, Mon Mothma was always an important character to feature in the story, and gave the very male-heavy original universe another female leader to celebrate. She didn't have the biggest of personalities either, and was kind of dry. But thankfully Rogue One gives Mon Mothma a little more character and allows her to fully embrace her potential as a leader.

For those who may not remember who Mon Mothma is or aren't familiar with the Star Wars canon, here's a refresher: played by Caroline Blakiston, Mon Mothma first appeared in 1983's Return of the Jedi. As a member of the Galactic Senate, she opposed the rise of Emperor Palpatine, but once he came into power, she turned revolutionary leader. The Battle of Endor in Return of the Jedi is where she really takes action. She works alongside Admiral Akbar and has one of the most famous lines of the film where she sadly delivers the news that "many Bothans died" while bringing news about the Empire's rebuild of the Death Star.

The character was supposed to appear in 2005's Revenge of the Sith, played by actor Genevieve O'Reilly, but the scene was unfortunately cut, which is a shame, since the scene definitely showed off her diplomatic personality and intelligent planning skills, even if it was a little dull. But thankfully, O'Reilly returns to play Mon Mothma in Rogue One, and her appearance in the movie is as much more than a bit player. With more dialogue, longer scenes, and more personality, O'Reilly's latest iteration of Mon Mothma makes her much more than the robotic version that first appeared in Jedi.

One of the more delightful aspects of Rogue One is how Mon Mothma appears to have a big sisterly affection for Jyn Erso, played by Felicity Jones. Whether she's smirking at Jyn's snarky comments, voicing her support for Jyn's ideas, or taking charge and ordering the rebel leaders to follow Jyn's plans, Mon Mothma turns out to be somewhat of a mentor for Jyn. It's not quite a mother-daughter feel, but definitely a vibe that's protective and supportive. That, in turn, allows for one of the instances in which Rogue One passes the Bechdel test. There's even another female politician in the mix involved in their conversations of planning attacks, building strategy, or making decisions.

As a character from Return of the Jedi, Mon Mothma gave Star Wars fans a way to connect Rogue One to the main story line. And as side anthology film, Rogue One definitely needed that throughway. It's great that Mon Mothma, an under-appreciated female character from the original series, was the one who could bridge that gap, and grow as a character as a result.