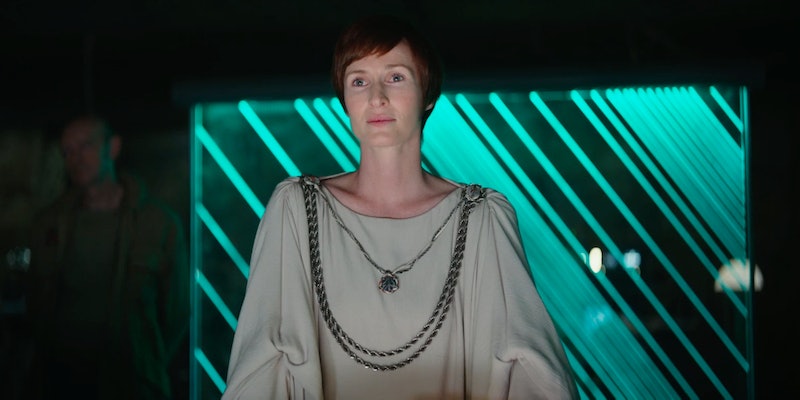 As many Star Wars fans have gathered by now, there's a lot going on in Thursday's Rogue One: A Star Wars Story trailer. First off there's the big mystery of just exactly who Felicity Jones' character, Jyn Erso, really is. Some fans are speculating that she might be the mother of The Force Awakens heroine Rey, and aside from maternal theories, there are multiple other visual and character connections to The Force Awakens. There's also talk of some missing Jedi and a possible appearance by Darth Vader. But personally, I think the most interesting part of the Rogue One trailer is the inclusion of Return of the Jedi fan favorite Mon Mothma.

For one thing, the character's appearance in the trailer suggests that the film is going to be just as female-driven as The Force Awakens. With Mon Mothma, Rogue One could give fans another woman in the Star Wars universe to root for. But what intrigues me the most is that Rogue One is kind of a gamble, in that there are no beloved characters that audience members can immediately grasp onto for a through line into the film. Practically the only connection to the original stories that the trailer shows is the existence of Mon Mothma, and that's a major deal.

For those of you who don't remember Mon Mothma or aren't familiar with the entire Star Wars canon, here's a refresher: the character, as played by Caroline Blakiston, first appeared in 1983's Return of the Jedi. She is a revolutionary leader and a politician who, as a member of the Galactic Senate, opposed the rise of Emperor Palpatine. She is probably best known for her involvement in the Battle of Endor, which takes place at the end of Jedi. In that film, she works alongside Admiral Akbar and is probably most famous for her delivery of the rebel briefing before the battle, where she dryly delivers the news that "many Bothans died" while bringing news about the rebuilding of the Death Star.

Sadly, Mon Mothma hasn't had a big presence elsewhere in the franchise. In 2005's Revenge of the Sith, a new actor, Genevieve O'Reilly, was cast as the character, but her scenes were left on the cutting room floor. In the deleted scene below, you can get a glimpse of Mon Mothma outside of her brief appearance in Jedi, where more of her diplomatic personality and intelligent planning are evident. Though the scene is incredibly dry and a lot of the acting is flat (a common complaint about the prequel trilogy), the presence of another cunning female politician is certainly welcome. It also offers a quick glimpse into Mon Mothma's history, and plants the roots that might allow the character to grow in future films. It's a shame that Sith couldn't make time for her, but thankfully, as a result of Rogue One's trailer release, fans know that's not the last they're going to see of her.

From the look of the trailer, the upcoming film might give more insight into Mon Mothma than any of the films prior. According to Entertainment Weekly , O'Reilly is returning to play the role again, and with a more fleshed out story line, she might become of the franchise's few great female characters. The storyline of Rogue One explores the background of the team that steals the plans to the Death Star before the action of 1977's Star Wars: A New Hope takes place. Those same plans are then put into R2-D2 by Princess Leia, inside which Luke Skywalker discovers them, and the epic saga unfolds from there. In the trailer, Jyn Erso is confronted by Mon Mothma, already a rebel leader, about her rebellious nature. Mon Mothma's smirk at Erso's assertion of, "This is a rebellion isn't it? I rebel" is already more personality from the character that has ever been put onscreen. It's a good sign for the size and depth of her role in the film.

Later in the trailer, Mon Mothma assigns Erso to infiltrate enemy territory and find out all she can about the Death Star in order for the Rebel Alliance to destroy it. Since fans have seen the end of A New Hope, you know she's successful, but that doesn't take away from the excitement that this trailer provides.

Though so little of Mon Mothma has been seen in the Star Wars films, the character does have extended involvement in the animated series The Clone Wars, where she becomes an advocate for peace during the war that takes place after 2002's Attack of the Clones. It's also implied that she has a bit to do with the raising of Princess Leia after her adoption by Bail Organa (Jimmy Smits); considering their similar wardrobe choices, it wouldn't be surprising. Hopefully, Rogue One will provide more info about these relationships, as well as Mon Mothma's role in the entire story.

And in doing so, it'll be a feminist win. When The Force Awakens was released, there was a lot of concern that the film wouldn't pass the Bechdel Test. Thankfully it did, and it's great to see that Rogue One is set on repeating that achievement, due, at least in part, to Mon Mothma and Erso's conversations. It's great news that puting Mon Mothma in the film not only means an expanded character, but a female-driven film. Fans may know little about her now, but it's clear that she's a powerful, smart, and important woman in the Star Wars canon. Hopefully, Rogue One will explore her history and create a fully-developed character, and as it's looking now, I couldn't be more excited for the film to come out this December.