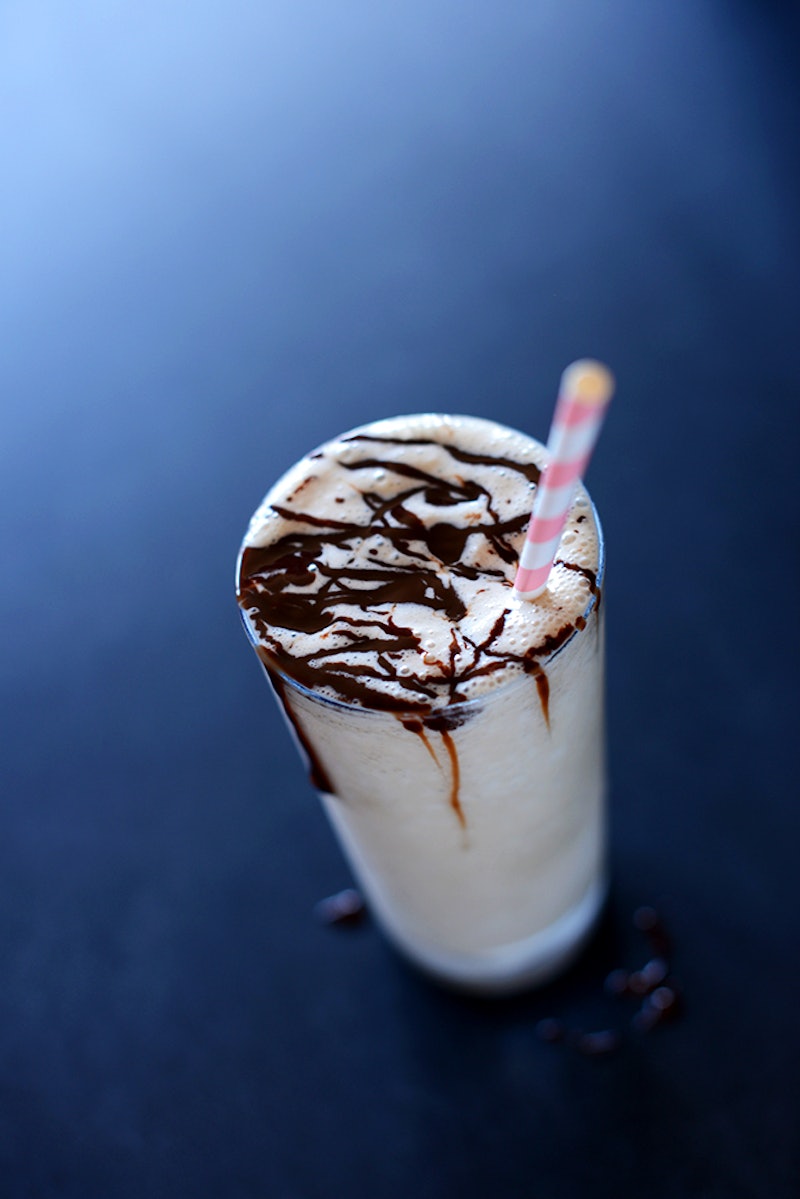 Everyone is always hating on New Year's Eve, and I get it. It's a lot of hype to live up to. And if you've had a crappy year — as many people have this 2016 — you might not even feel much like celebrating. That said, in my opinion, the fact that this has been such a politically exhausting year is all the more reason for us to celebrate the potential for new beginnings (yes, I'm trying to be optimistic). We're going to need all the strength we can get in these next few years, and we deserve to party before we resume the good fight. And if, like me, part of that fight is in speaking up for animals and their rights, you're going to want to have some vegan New Year's party recipes on hand for the celebration.

Here are 50 vegan New Year's party recipes to ring in 2017 with a full mouth and heart.

New Year's marks the end of the holiday season, so you might as well get some final eggnog in there. This recipe from Veggie Primer uses cashews, coconut milk, and dates for peak creaminess — and suggests you add Fireball whisky.

If you'd like to pretend it's already summer of 2017, this mango mojito by Vegan Richa is delicious and refreshing.

Horchata can easily be made vegan, and this Minimalist Baker recipe is a great holiday drink to add to the mix.

For your PSL-loving friends, this recipe by Veganosity will help them remember pretty much the only thing that was comforting about Fall 2016.

In Spain, Venezuela, Cuba, Mexico, Ecuador, and Peru, people eat exactly 12 grapes at midnight on New Year's — one grape for each stroke of the clock. This Minimalist Baker recipe nods to the New Year's grape tradition ... in the form of sangria.

This homemade vegan Baileys recipe by Oh She Glows is delicious on its own or mixed into that vegan nog.

For those who prefer to stick to the bubbly on New Year's Eve, these sparkling pomegranate margaritas by Minimalist Baker are even tastier than straight champagne.

Personally, any blue drink looks like a hangover to me, but that doesn't mean they aren't cool AF. This Curaco martini by Veganosity is a party drink, that's for sure.

If you want a spicy hot cocktail to serve, try this Minimalist Baker hot toddy.

Bourbon is a great winter drink, and this Minimalist Baker recipe makes it all the more festive by adding jam and oranges.

Moving on to the food to eat with all those drinks, this beautiful cheese log by Pure Ella has the holiday season written all over it.

This vegan 7-layer dip by Minimalist Baker will make any of your vegan guests super happy, since we usually have to skip this classic party staple.

This Earth Balance recipe is simple and yummy as a sweeter party snack.

Another good finger food, these cauliflower wings by Vegan Richa are absolutely delicious.

Bean dip is always great for a party, but this dip by Minimalist Baker stands out for its creativity and skillet presentation.

I love nachos, but I usually think the ratio is all wrong. This Veganosity recipe gets it right, loading chips not only with vegan cheese, but plenty of beans, salsa, and grilled veggies, too.

This surprising combination by Veggie Primer is a delicious and unique take on your standard and somewhat-boring cucumber roll.

Because sometimes, you want your sweet potato chips to be covered in dark chocolate. This is why the Minimalist Baker is my favorite.

While this might be dangerous if you don't put a sign for those with peanut allergies by the dish, these rolls by Veggie Primer are too unique and sweet/savory to pass up.

Another party staple, these candied almond by Oh She Glows are perfect and simple for healthier buzzed snacking.

I love popcorn, and these masala spiced popcorn balls by Earth Balance take things next-level with the surprising flavor combination.

Another snack that will make you a hero to your vegan guests, these Minimalist Baker vegan cheez-its are actually easier to make than you'd think.

In terms of finger food, it doesn't get much prettier or tastier than these pinwheels by Minimalist Baker.

Nutella isn't usually vegan, but this recipe by My Darling Vegan rights that wrong. Might as well just leave a bowl of this out on the table with some strawberries.

Personally, cornbread is one of my favorite buzzed snacks. Something about the texture and taste is just so damn satisfying — like savory cake. This recipe from Minimalist Baker uses aquafaba (aka the liquid in a can of chickpeas), which sounds gross but mimics egg whites.

Second only to drunken cornbread, I love a late-night biscuit. These beautiful biscuits by Oh She Glows using vegan cheese prove you don't have to give up that cheesy flavor in order to give up on cruelty.

How pretty is this? This spicy smoked cheese by My Darling Vegan should fool your non-vegan guests quite nicely.

A healthier snacking option, these roasted chickpeas by Fo Reals Life are spicy and simple to make.

Lentils are a traditional New Year's Eve dish in Italy, Germany, and Brazil. Impress friends with that fun fact and this healthy-yet-tasty dip by Minimalist Baker.

If you're looking for some sit-down dinner party fodder, I've also got you covered. Did you know that eating Black Eyed Peas on New Year’s is supposed to bring good luck? Well, you do now! Make this Oh She Glows recipe and let the good luck roll in.

Greens are a traditional New Year's dish in several different countries because the green leaves look like folded money, and are thus symbolic of good fortune in the new year. Make these greens by Minimalist Baker and impress your guests with that fun party fact.

If you want to double up on the good luck, why not combine your greens and black eyed peas into one super-good-luck dish? These mini burritos by Fo Reals Life are perfect for your healthy friends to have something to nosh on.

Unfortunately, pork is also considered a "lucky" New Year's food, but if you ask me, there's nothing lucky about that for the pig. Bite back at the tradition with this "pulled pork" BBQ vegan pizza by My Darling Vegan.

Enchiladas are another classic holiday staple, and this Oh She Glows recipe does vegans proud.

If you're more partial to mac n' cheese, this recipe by Vegan Richa is spicy, rich, and unique.

Yes, you can make quesadillas with things besides cheese! One delicious place to start? Pumpkin puree and beans, with this easy recipe from Fo Reals Life.

Tamales are another classic holiday dish, and this vegan mushroom recipe by Veganosity looks delicious.

Moving onto dessert (aka all that matters), donuts are another New Year's staple in Italy, Poland, Hungary, the Netherlands, and Holland. Honor the tradition with these My Darling Vegan mini donuts, which are the perfect size for a party.

Cakes are also commonly served on New Year's around the world, with a special emphasis placed on round or ring-shaped cakes with coins and other (potentially hazardous) presents hidden inside. Make this Heart Of A Baker cake with spiked rum coconut cream for a boozy dessert.

God, this cake is so good. I made this Minimalist Baker recipe (without gluten free flour, which also works) for a group of friends, and they polished it off in five minutes flat. It uses avocado and banana to get that fudginess, and plenty of coconut oil and cocoa powder to make the chocolatey richness come through. What I love about this cake is that it's light enough to have a few pieces without feeling sick in the slightest — yet it tastes super rich and fudgy and chocolatey. Seriously, don't feel bad about drunkenly eating the whole thing.

Cookie dough has to be one of the other best buzzed snacks, and this recipe by The Pretty Bee is perfect to put out as a bite-sized dessert. Because they're vegan, you don't have to worry about salmonella!

If you'd rather drink your dessert on New Year's Eve, this Minimalist Baker shake will probably be the best thing that happened to you in 2016.

These adorable mini pies by Minimalist Baker are perfect for a party, since you won't have to worry about putting out plates for them.

What's better than chocolate and peanut butter? Nothing, that's what. I want these raw balls from Oh She Glows in my mouth, stat. (And yes, I know how that sounds, and I'm OK with it.)

I made these the other night, and while I'd say they are more like a lemon cheesecake than a traditional lemon bar, this Minimalist Baker dessert is delicious. You could even easily skip the crust if you prefer, in my opinion.

Another bite-sized donut option, these espresso-glazed donuts by Minimalist Baker will help keep your guests awake past midnight.

Fudge is delicious. Eggnog is delicious. This recipe by The Misfit Baker simply combines the two flavors into one awesome holiday dessert.

If you want to be even more ambitious with you New Year's Eve cake, this creation by Wallflower Kitchen is definitely a clock-stopper.

OK, so this is probably more of a dessert, but I also see no reason why you can't also start with these Minimalist Baker White Russians.

More like this
69 Great Gifts For Guys No Matter What Their Hobbies Are
By Teresa Newsome, Mia Mercado and Brittany Leitner
7 Joyful Alternatives To A Traditional Holiday Celebration
By Jessica Goodman
35 Genius Secret Santa Gifts For Someone You Don’t Know Very Well
By Rebecca Deczynski and Lauren Grant
35 Holiday Trivia Facts That Will Impress Your Guests This Year
By Lauren Grant and Emma Carey
Get Even More From Bustle — Sign Up For The Newsletter