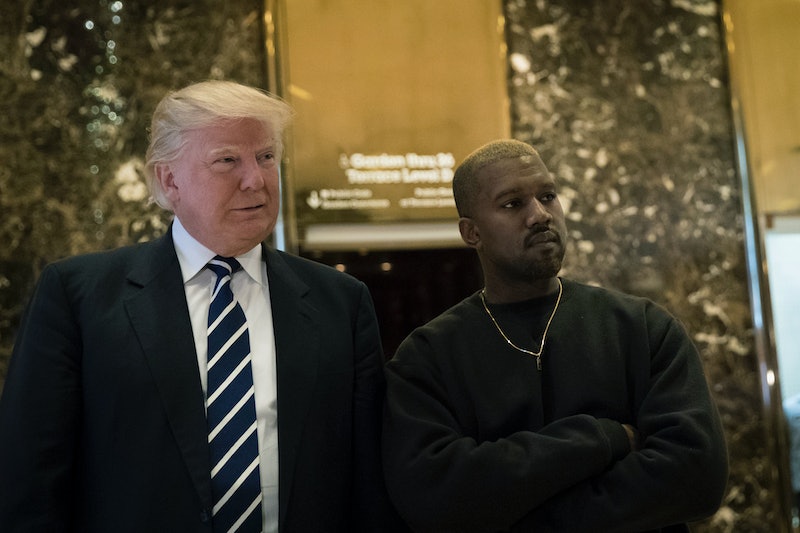 As if 2016 was determined to show us exactly how crazy things can be before New Year's, Kanye West's Dec. 13 visit to Trump Tower to meet with President-elect Donald Trump was an outrageous foretelling of how much more bizarre things might get. According to West and Trump, the odd couple discussed topics ranging from "life" to "multicultural issues," but it was a single-hashtag tweet by the rapper that was perhaps most interesting. Kanye West hinted at Trump's potential two-term presidency, and his own run in 2024 — an update to last year's announcement at MTV's Video Music Awards that he plans to run in 2020.

Nobody knows for sure what West's #2024 tweet means, whether he actually plans on running or believes he can win, or what exactly was said in their meeting at Trump Tower. It is admittedly fairly cool of West to discuss "violence in Chicago" with the president-elect after his arguably racist comments about the city during one of the presidential debates, but beyond that, speculation leads us to believe that West has a lot of confidence in the Trump presidency, and for his own potential campaign as well. I wonder who he'd pick as his running mate, or which party he'd try to run with...or if we'll even still have political parties by then.

As a Yeezy fan, it's been disappointing and at times concerning to watch the man behind the genius of "My Beautiful Dark Twisted Fantasy" openly support The Donald, and this latest meeting did little to dissuade me and the many other West fans I know from that feeling. We've put up with so much from Ye — slut-shaming Amber Rose among the chief of his offenses — but this strange and hyper-public flirtation with Trump truly takes the cake.

Kanye West is hubris personified, and that bravado (which hints at something deeper, darker, and far less secure) has fascinated fans like me for years. Now, I'm starting to question just how far he'd take it, and if his own seemingly never-ending search for fame could lead him down as dangerous and foolhardy a path as Trump himself. Maybe A$AP Ferg's comment about West's "strategic" meeting with the our new terrifying president is right, and maybe something positive will come of it, but for now, we can only shake our heads in disbelief as this most recent improbable headline passes by in the endless stream of strange that is 2016.

More like this
Are John Legend & Kanye West Still Friends? The Singer’s Latest Update Is Candid
By Brad Witter
What Is Ben Affleck's Net Worth? At 50, The Oscar Winner Makes 8 Figures Per Film
By Meg Walters
Why Eurovision 2023's Host City Won’t Be Revealed For A While Yet
By Sam Ramsden and Rachel Mantock
Demi Lovato Is Dating A Fellow Musician Who Is On A Sobriety Journey
By Grace Wehniainen
Get Even More From Bustle — Sign Up For The Newsletter