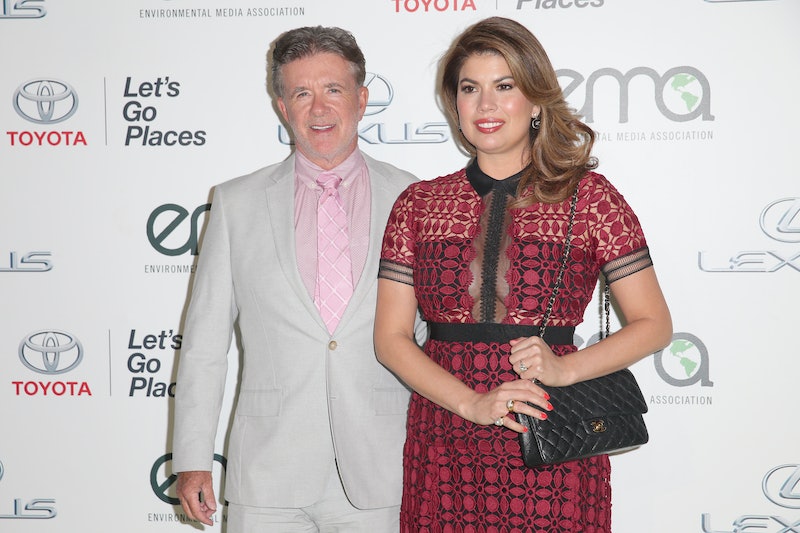 On Dec. 13, the entertainment world was devastated to learn that Growing Pains actor Alan Thicke died at age 69 of a heart attack while playing hockey. Alan Thicke was survived by his wife Tanya Callau as well as three sons — singer Robin (of "Blurred Lines" fame), Brennan and Carter. Callau was Thicke's third wife, and the two married in 2005. Thicke was married to his first wife, Days of Our Lives star Gloria Loring, from 1970 until 1984, and they had two sons, Brennan and Robin, together.

Born and raised in Bolivia, Callau starred alongside Thicke and his youngest son Carter on "Unusually Thicke," a self-styled "reality-sitcom hybrid" mockumentary show that aired on digital cable channels in the US and Canada. The strange and hilarious show followed the elder and younger Thickes and Callau in a format that poked fun at shows like The Real Housewives and Keeping Up With The Kardashians. In its two seasons, the Thicke-Callau family cracked viewers up with the surprisingly funny antics of the former Dr. Jason Seaver.

Callau and Thicke reportedly met when the former was a model in Miami in 1999, and despite their striking age difference (Callau was 24 to Thicke's 52 at the time), they began dating and married six years later.

In his 2004 self-help book How to Raise Kids Who Won't Hate You , Thicke wrote in a touching manner about the impact his wife had on him following the death of his mother and the dissolution of his marriage to his second wife, Carter's mother Gina Tolleson:

My salvation came in the form of a beautiful, sensitive, giving, caring Bolivian princess named Tanya Callau, who brightened my world one day when I was bookeda s the comedic entertainment for a Florida Marlins fashion show, in which she was one of the models. Soon after, she was visiting L.A., and she made the transition from South Beach supermodel to L.A. diaper-changer in what seemed like an instant.

The sudden loss of Thicke, like so many others in 2016, reminds TV and pop culture fans that the celebrities on their screens are real people, and that, at least when it comes to love and loss, they're more like us than we think.

More like this
Kim Kardashian & Pete Davidson’s Relationship Timeline From Start To Finish
By Jordyn Tilchen and Bustle Editors
Khloé Kardashian Is Reportedly Dating A Private Equity Investor She Met Through Kim
By Jordyn Tilchen
Kendall Jenner & Devin Booker Have Seemingly Reconciled Just Weeks After Split
By Jordyn Tilchen
Who Is Bad Bunny Dating? Gabriela Berlingeri's Vocals Are Featured On His Song "En Casita"
By Radhika Menon
Get Even More From Bustle — Sign Up For The Newsletter