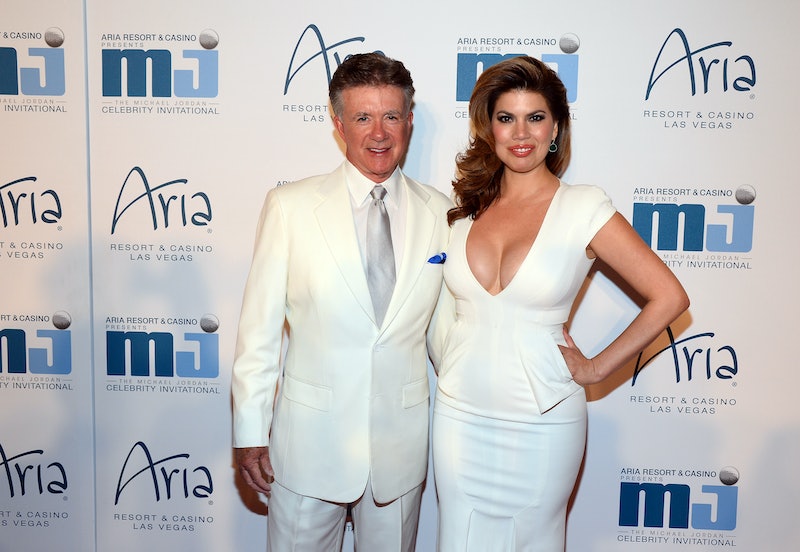 Once again, there's a new reality show you should probably start watching. Unusually Thicke is hilarious and everything about it is super weird, from the fact that it's about Growing Pains patriarch Alan Thicke (also the real life father of Robin Thicke) to its "reality sitcom" format (because that's apparently a thing). Unusually Thicke follows the lives of Alan, his wife Tanya, and his teenage son Carter as they navigate such troubles as what to do about all the SWAG in their house (see the clip below) and how to take care of wounded street animals. But watching Alan and Tanya interact, I couldn't help but wonder: How did these two get together?

It all started in 1999, when she was 24 and he was 52. Alan was working a celebrity presenter job in Miami, where Tanya had a modeling gig. They, met, hit it off and started dating — however, it's unclear as to whether this was pre- or post-Alan's divorce. He was still married to Carter's mom, Gina Tolleson (a.k.a. Miss World 1990), up until September of 1999, so there's a good chance Alan met Tanya while he was separated from Tolleson.

So what was it that drew Alan and Tanya to each other? Surely the fact that Tanya is gorgeous and was a model at the time had something to do with it, but what did she see in him? His charm? His wit? Did she realize who he was at first? She lived in Bolivia up until the '90s — had she known about Growing Pains before she started dating Alan? If she didn't, I'm sure he was happy to get her up to speed. He might have even prefaced the story with a request to "show him that smile."

Whatever the details of their (hopefully) meet-cute, things went well enough that the pair wed in 2005. Alan, who had been previously married twice (to Tolleson and before that to singer Gloria Long), joked in the marriage announcement, "I'll be on my third honeymoon, so I'm more of an authority than I care to be."

Between the affectionate banter and reluctant laughs on Unusually Thicke, it's clear that Alan and Tanya are comfortably crazy about each other. They're that couple who love to argue and tease each other, and frankly, it's adorable.