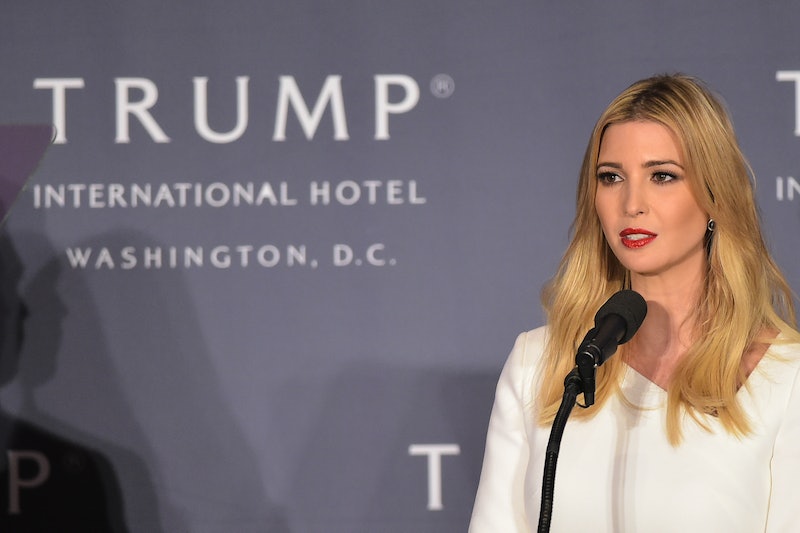 President-elect Donald Trump often invokes "America First" to explain his approach to governance. Putting aside the disturbing roots of that particular phrasing, Trump's pledge to ignore international interests and focus on what he thinks America should be found a large and enthusiastic fanbase. But when it comes to removing any potential — and possibly damning — conflicts of interest between Trump as POTUS and Trump as billionaire business tycoon, the motto seems to be "Trump First." He just announced that control of his sprawling business will not be handed to Ivanka Trump, but rather to his two adult sons. Since his daughter had been expected to take over the business, this development comes rather unexpectedly. So, why not Ivanka?

After all, Ivanka appears to be the favored Trump child. Donald Jr. and Eric, for example, weren't stationed by the mogul's side during interviews, both pre- and post-election, at the same rate as Trump's oldest daughter. She's been a regular cast member on Celebrity Apprentice, and has appeared on far more episodes than either of her brothers. Then there's the fact that Trump himself said she was his "favorite" kid, surely causing widespread distress among child psychologists (and sane parents) around the nation. Ivanka even snagged the most coveted speech slot at the Republican National Convention, introducing her father's keynote on the final night.

One possibility for Trump passing the business reins to Donald Jr. and Eric rather than Ivanka is that his youngest daughter has a business of her own to run. The Ivanka Trump brand sells apparel and accessories, targeting young professionals and working mothers. And her father's brutish presidential campaign did appear to threaten the success of this enterprise, one that relies by definition on the family name for its market punch. Perhaps Ivanka needs more time to focus on damage control for her brand, especially considering the #GrabYourWallet boycott campaign against her products.

Still, that cannot be the whole of the story. After all, Ivanka serves now as an executive vice president of the Trump Organization, along with Donald Jr. and Eric. In fact, the three of them are billed as "The Next Generation" on the Trump Organization website. (Will Barron and/or Tiffany be joining this exclusive club at some point? A question for another time.) As for now, the answer to the pertinent question here of "Why not Ivanka?" remains elusive. Maybe we'll get a answer at that ever-promised, still-delayed Trump press conference. Stay tuned.

More like this
A Political Thriller Inspired By The Munich Massacre Is Coming Soon
By Darshita Goyal
Which Cast Member of 'Westworld' Season 4 Has the Highest Net Worth?
By Meg Walters
Emma Mackey *Is* Emily Brontë In The First Trailer Of The Biopic
By L'Oréal Blackett and Sam Ramsden
'The Capture' Is Finally Back – & S2 Looks Tense AF
By Sophie McEvoy and El Hunt
Get Even More From Bustle — Sign Up For The Newsletter