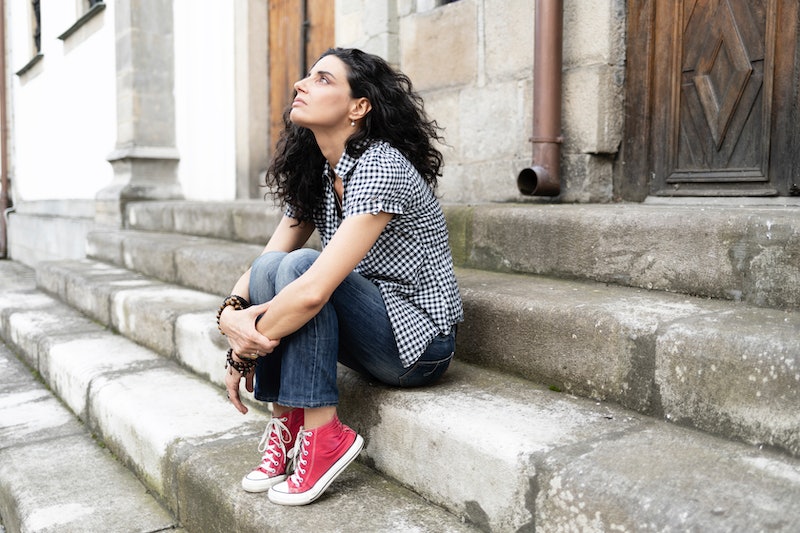 Trauma is, in its most basic form, "an emotional response to a terrible event like an accident, rape or natural disaster," according to the definition of trauma by the American Psychological Association. If you've experienced trauma at some point in your life, whether it's been from a life-threatening event or a series of deeply-shaking ones, it can be difficult to know what to do next or how to respond. Fortunately, there are options; a lot of research has been done into trauma's impact on the brain and the body, with intriguing results for those of us who need to process it and find ways to deal with trauma moving forward.

Treatment for post-traumatic stress disorder (PTSD) is both specific and requires an expert to handle it: exposure therapy, for instance, involves a trained specialist taking the traumatized patient back "through" the experience of the trauma via memory, helping them to gradually lower their levels of arousal in response to it until they no longer respond with a "fight or flight" reaction.

Not everybody who's been exposed to trauma develops PTSD, though: stress reactions are a blanket way to refer to our reactions to an intensely traumatic event or series of events, and they encompass everything from survivor's guilt to social isolation and physical or mental issues. So how can you move past stress reactions and trauma into a more healing frame of mind? Here's what the experts suggest.

In 2015, a groundbreaking book was written about how we recover from trauma and what it takes: The Body Keeps The Score: Mind, Brain and Body In The Transformation Of Trauma , by the expert Dr. Bessel van der Kolk. The whole thesis of the book is that trauma severs our connection between our bodies and minds, and stops us from being comfortable with other humans because we're so perpetually hypervigilant. It's that, he says, that can be the key to recovery: feeling safe in the presence of others. "You don’t need a history of trauma to feel self-conscious and even panicked at a party with strangers — but trauma can turn the whole world into a gathering of aliens," he writes.

If you want to begin to recover from trauma and its responses, Dr. van der Kolk advises, you should emphasize "social support," which is "not the same as merely being in the presence of others. The critical issue is reciprocity: being truly heard and seen by the people around us, feeling that we are held in someone else’s mind and heart. For our physiology to calm down, heal, and grow we need a visceral feeling of safety." This can be extremely difficult (indeed, Dr. Van der Kolk characterizes it as "terrifying" for many people getting through trauma), but at the very least, identifying relationships and people with whom you feel safe and secure and nourishing those bonds is a good start.

Do Yoga And Mindfulness Meditation

Dr. Van der Kolk's model of body and mind being somehow disconnected by trauma seems a bit airy-fairy, but it's backed up by solid science in the usage of two different disciplines on people with PTSD: yoga and mindfulness. The "emotional dysregulation" of trauma, as it's called, whether it's short-lived or part of an ongoing pattern, is basically down to a problematic relationship between the body and the brain, where the brain interprets various stimuli in the world as threatening, problematic or otherwise deserving of irregular levels of arousal. And the roots of that problem appear to be found in the brain.

In separate studies, the practices of yoga and mindfulness, both of which emphasise connection with and awareness of the body, showed lower arousal levels; Mika Doyle, writing for Bitch Media, recounted how her own participation in a yoga trauma trial resulted in lowered stress results in tests like skin conductance, which judges just how hyped-up and ready to fight the autonomic nervous system is. And studies on mindfulness have shown that, if practiced regularly, it changes the structure of the brain (including the amygdala, the neural threat center) to increase emotional regulation and focused attention.

Hyper-arousal, as we've covered, isn't just a problem for those with PTSD; people who've experienced trauma can find themselves anxious and miserable, edgy, angry, irritable, ready to fight or terrified in response to painful memories or worrying stimuli. This is perfectly normal, but it can also be extremely confusing and upsetting.

Part of the problem is the brain's mis-reading of the inputs it's receiving from the world. The Help Guide suggests taking a different tack: looking for sensory inputs that soothe you and calm you down. "Does a specific sight, smell or taste quickly make you feel calm? Or maybe petting an animal or listening to music works to quickly soothe you?" they suggest. It's important to note that what calmed you down before the trauma may not work as well now, though it could recover that quality in the future. Experiment with things that seem to lower your emotional and physical responses, and go to them if you start feeling overwhelmed or emotionally agitated.

There's a reason why so much therapy around PTSD involves working through memories by recalling them on purpose: how the brain stores and deals with these traumatic memories is the basis for traumatic response, and "reconsolidating" the memory, as it's called in psychology, by taking the sting out of its tail helps recovery.

If you're not keen to deal with the memories themselves without professional help, though, the psychologist Rick Hanson has an idea for providing other memory-based help: make a new positive memory, deepen and make it important to you, and use it as a tool to anchor you when you're upset. You can call upon this memory when you're delving into a traumatic one to help to negate or balance it out.

Understand The Process Of Recovery

There are a few suggested ideas about the "stages" in which people who've experienced trauma recover and get back to their old lives. How you react personally depends on what you've experienced and how deeply it's impacted your psyche and body. One model suggested by Psychology Today has four stages: the initial emotional overload and shock, the return of feelings in a wave (which can be terrifying), the need to take some kind of constructive action, and what's called "reintegration," in which you re-enter the world with the damage and new things you've learned.

Things are different if you're doing this with professional help. Judith Herman, in Trauma & Recovery: The Aftermath of Violence, laid out a simple three-stage psychological journey in therapy that recovering trauma sufferers can use to learn what to expect. The first stage involves dealing with coping measures like alcohol and drugs, trying to feel safe in your body, relationships, and world, and learning skills to help with healing. The second is about mourning, going deeper into memories, and working through them with the help of the therapist. The third stage is the one in which you try to get out into the world again and re-establish connections. If you're dealing with trauma, make sure you don't do it alone. I wish you the best of luck in all three stages.

More like this
What Is The Forest Personality Test? The TikTok Trend, Explained
By Georgina Lawton
Young People Are Still Experiencing Period Poverty In UK Schools
By Sophie McEvoy
The Top Mistakes Scorpios Make In Relationships (& How To Avoid Them)
By Nina Kahn
Taking Care Of Your Home Is Hard, But These Clever Things Make It Much Easier
By Rebecca Martinson
Get Even More From Bustle — Sign Up For The Newsletter