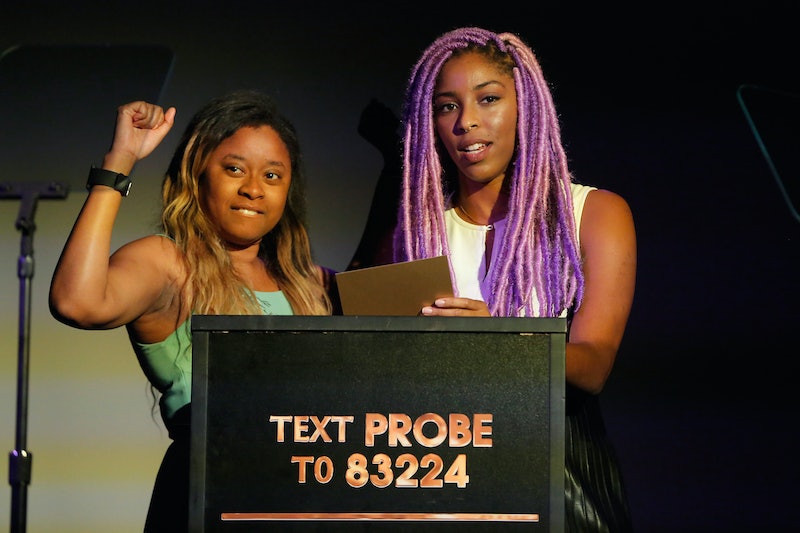 The holiday season is nearly upon us, and for many, it'll involve long commutes to hometowns, interminable shopping journeys to find the last possible can of cranberries, and other experiences that are less savored than, well, survived. What'll get you through them? How about a swath of funny, brilliant podcasts for every interest, from gossip to science to history to racial politics, many produced and hosted by awesome women with good sh*t to say? Thought that might perk you up. All you need is iTunes; the vast majority of them are free, and a lot have a whole backlog to download and explore at your leisure (i.e. when your Aunt Janine wants to ask, again, why you aren't married yet).

Podcasts are one of the best refuges for the curious and low-on-cash, since the available talent is astonishing (hi, Jessica Williams, can we all be your friend?) and the amount of content pretty overwhelming. If you're having trouble picking which podcast to listen to for your holiday survival, though, I'm here for you.

Here are 15 of some of the best podcasts out there at the moment, many created by women, and with angles to suit everybody's interests. Yes, even if you're into frogs, French feminism, or funeral parlors. Told you it was a great world out there.

You Must Remember This

History geek? Love Old Hollywood? This podcast has come to give you life. You Must Remember This is Karina Longworth's journey through the scandals, epic gossip, and forgotten annals of Tinseltown. It is a must for film buffs, Hollywood-watchers, and anybody with ears, frankly. It's focused on everybody from legendary vamp Theda Bara to Charlie Chaplin and Marlon Brando, and you know the dirt on that lot gets interesting fast.

Fan of RuPaul's Drag Race? If not, what on earth are you doing with your life? If yes, this is your next way to get through the withdrawal until the next season: RuPaul and right-hand woman Michelle Visage interview a different Drag Race competitor every podcast, including fan favorites from Alaska to Katya. The conversations can be funny, insightful, and wicked — all in the same 10 seconds. Don't f*ck it up.

You likely know Jessica Williams as your new phenomenal girl crush from her stint on The Daily Show, but her latest venture is giving people life: partnering with fellow comic Phoebe Robinson for a trip through culture, hilarity, and everything awesome. The last few episodes have included Danielle Brooks, The Color Purple, sex anecdotes about The Rock, and interviews with Pussy Riot. It's fierce.

Get it from WNYC here.

Oh, Bitch Media, how we love thee. This is frontline feminism: It's about activism, patriarchy, dealing with sexism, demonstrations, democracy, the election, and other bits of political feminism and left-wing thought that you might find deeply fascinating/inspiring/angering, depending on the day. (Their other regular podcast series, Backtalk, works as a conversation between Bitch editors and is more culture-focused, and definitely worth a listen.)

Get it from Bitch Media here.

Women Of The Hour

Whatever your feelings on Lena Dunham, you've got to admit she curates a damn good podcast, with interviews with everybody from Zadie Smith to other Girls cast members. The podcast was created by Buzzfeed and has brought luminaries like Emma Stone and Sam Taylor-Johnson into meet Dunham on the mic and discuss feminism, careers, life, and advice in general. And yes, it is intersectional AF.

I Want It That Way

Look, we know that just because it's the holidays you're not completely giving up sex. (Hell, that's what Lent is for.) That's why you need Bustle's I Want It That Way podcast, which is a no-barriers, no-boundaries, no-judgement look at everything sexual you've always wanted to know about, from sex injuries to myths and STDs. It's not your typical sex advice podcast, and that's why you need it. Hosted by Bustle lifestyle editors, you'll also get to hear the dirt on their personal lives.

Get it from Soundcloud here.

There is almost nothing I like better than women ignored in history getting their modern-day props. If this is an obsession you share, The History Chicks is going to be your jam over the holidays. It celebrates the lives of hidden women who made big impacts on human civilization and were either maligned, misinterpreted, made into myth, or utterly sidelined. Their latest episode on Mulan is a full-on historical feast of original sources and thousand-year-old arguments. If you need an expansion of your list of historical lady-heroes, go here immediately.

If you're confused by how the media works (or doesn't seem to work) these days, there's no better weekly source for analyzing the role media plays in contemporary politics than WNYC's classic show On The Media. Turn to it to make sense of the post-Trump world.

The brilliant Talk Nerdy podcast hosted by Cara Santa Maria can be judged to be pretty astonishing by its guests alone. She's hosted some of the world's coolest scientists and science writers (Michio Kaku and Dava Sobel have dropped by) to chat about the glorious world of STEM, and in the world of female-led science podcasts (hell, science podcasts generally), she's one of the best.

Honestly Though is Bustle's attempt to cut through the crap on every issue in modern female taboo experience we can think of: topics like non-monogamy, sex after sexual assault, what going through divorce is really like, and much more. The point is that each interview is unvarnished, which means that you might discover some uncomfortable truths and confront expectations and beliefs you weren't even aware that you had. It's often very NSFW, and you're basically guaranteed to come out of it with your eyes opened. The new season debuts early next year, so you can catch up on last season's taboo conversations now.

This is the documentary source for people who can't just re-watch everything David Attenborough ever did. It takes on basically every part of the natural environment and specific studies, species, and other brilliant minutiae. There's no way to make a plane trip go faster than a prolonged, weird, funny investigation into the noises of frogs, or Italian truffle-hunting, or the oddness of the vampire bat.

Want a demented escapist narrative to get you out of your everyday Christmas/Hanukkah/general holiday grind? This award-winning podcast series about rival funeral directors on a tiny island called Piffling in the Channel Islands has a huge swath of fans, and for good reason: How can you not love a main character called Rudyard Funn whose main sidekick is a mouse called Madeleine? Reviewers have compared it to Fawlty Towers and Black Books, but it's got a genius all of its own.

Hosted by vegan activist Ari Solomon and his husband, Mikko, this weekly show is both woke and surprisingly fun listening. The show opens with the feminist couple venting on the week's political news, and covers everything from cinema to the LA social scene to new vegan products. Every episode also covers animal rights news, but non-vegans will certainly appreciate this podcast as well.

Black Girl Nerds was founded as a space for all nerdy girls, particularly those of color, and the excellent podcast series is all about nerdery, patriarchy, race, and how they intersect in the geek world. From superhero characters in comics to Luke Cage and cosplay, this is a fascinating walk through unadulterated nerd culture with brilliant opinions to spare.

Deeply personal stories are the common thread of Lea Thau's podcast, which seems designed to increase human empathy. The Peabody award-winning producer and former Director of The Moth expertly edits this storytelling podcast, which covers everything from the host bearing her own love life's story to a heart-wrenching tale told by a mother whose son wanted to murder her husband. Listen to this if you think your family's crazy.

More like this
At 14, Tatiana Maslany Was Obsessing Over Tamagotchis & The Spice Girls
By Gabrielle Bondi
9 Funny Instagram Locations To Use On Your Next Post
By Siena Gagliano
Jane Lynch Revealed Why She’s Leaving 'Funny Girl' After Lea Michele Was Cast
By Grace Wehniainen
The 12 Best US Open Tennis Outfits Of All Time
By Avery Matera and Dominique Norman
Get Even More From Bustle — Sign Up For The Newsletter