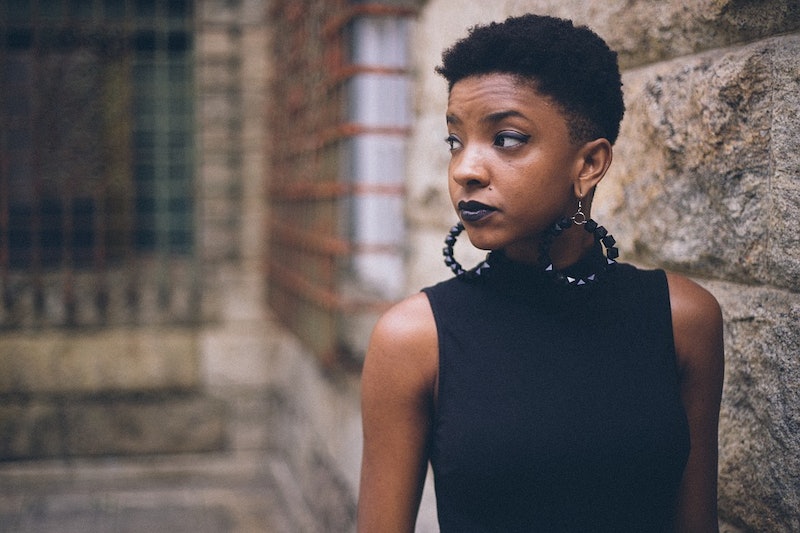 We talk a lot about self-care at Bustle, particularly in the context of managing mental health, as it's often very important to help people with depression, anxiety, and other difficulties get through everyday life. But in a wider context, self-care — which, in the excellent definition of Dr. Christine Meinecke at Psychology Today, is not self-indulgence or self-pampering, but "choosing behaviors that balance the effects of emotional and physical stressors" — is both an important general practice, and a fundamentally feminist idea.

The notion of self-care for feminist activists has been around for a while: Everyday Feminism, for instance, has a brilliant guide for activists to keep themselves psychologically healthy and strong while fighting the good fight. But self-care is more radical than it seems. Just the act of taking care of oneself as a woman in the world is a movement against misogyny and sexist expectations; the genius writer and feminist Audre Lord once said that, "Caring for myself is not self-indulgence, it is self-preservation, and that is an act of political warfare."

The idea of self-care as a female violates patriarchal norms of the woman as carer of others — and of female emotion and pain as invalid, undeserving, or somehow lesser. If you're a feminist, taking time to balance out the stressors in your life (many of which are possibly misogynist at root) with a bath, a walk, or a good book is not a time-out from being political. It is political. Here's why.

Women Have Historically Been Carers, Not Self-Carers

What is the "purpose" of womanhood? That's one of the fundamental questions of feminism — and it's not hard to find answers that, in many societies and cultures from the historical to the modern, make the female subservient and responsible for others.

The ancient Greek statesman Demosthenes commented that “We keep hetaerae [courtesans] for the sake of pleasure, females slaves for our daily care, and wives to give us legitimate children and to be the guardians of our households." Women, in other words, were serving the needs and requirements of men and children, with their own requirements secondary (or last). It's a system that's also been manifest in law: the idea of "coverture," that the person and rights of the wife were utterly subsumed into that of her husband when she married, was part of English and American law for ages, and lasted up until the 1960s in some parts of the United States.

These are just two examples of a pervasive bit of thinking: that women exist to be naturally caring, rather than to care for themselves. In the past three decades we've developed the term "emotional labor" to talk about all the work done, usually by women, in caring for others in non-economically rewarded circumstances ("repeated, taxing and under-acknowledged acts of gendered performance," in the words of Rose Hackman at the Guardian). Women have been seen as the nurturers rather than the nurtured, and that can be deeply constricting in many ways: it creates the expectation that they'll work in underpaid "caring" industries like nursing and the service industry, and makes them seem unfit for independent and less emotionally-based work in other fields, like STEM.

And in case you're thinking "but women are just better at this stuff," it seems that's not entirely the case: studies have found that expectations of gender deeply affect the ways in which kids are socialized, particularly when it comes to emotion. Women, in other words, are trained from a young age to be more in touch with the emotions of others, while men are told to suppress theirs. In more egalitarian countries, the emotional imbalance is less pronounced.

In this context, the notion of saying "I'm taking care of myself now" is a pretty rebellious act, because it works against generations of cultural training that women's first responsibility is the emotional and practical care of others, and that they should be shamed as "bad" or "neglectful" if they take time for themselves, their careers, and their health. Shutting the bathroom door for a bath? Pretty feminist after all.

An absence of self-care produces people who have put their own needs persistently last, dismissed them, made no space for them, and basically squashed the entire concept of their own desires as a priority. That isn't a recipe for a healthy psyche. A women's resource center in Fort Garry points out that a lack of self-nurturing can lead women to "feel unhappy, have low self-esteem and feel resentment," none of which are products of a settled and happy self.

It's deeply unfair to say that only satisfied and empowered women can be feminists making change: the damaged, angry, and disenfranchised among us are loud and crucial voices, and the notion of excluding anybody is unproductive. But it's also not fair to expect you to go out and yell for other women in protests, write editorials, or even get into arguments with that sexist uncle at Christmas when you're not taking care of yourself in the process.

Whether you're an activist on the front lines or holding your feminist flag in your own sphere, it's important — indeed, it's at the very core of the movement — that you value yourself, take time out, and in the words of Psych Central, "listen to your body, and do what you want without resistance." Resisting patriarchy is hard enough; doing it while resisting your own needs makes it even harder. As the feminist poet Adrienne Rich noted, "There must be those among whom we can sit down and weep and still be counted as warriors."

The notion of emotional pain, trouble, labor, and weariness is often not validated in modern societies, for either gender. Dr. Leon Seltzer, writing for Psychology Today, has some piercing observations on why emotional discomfort is so often consciously sidelined. "Tendencies toward denial, withdrawal, and self-isolation are common in reaction to deeply felt emotional pain," he writes, and notes that disclosing our emotional tiredness to others is often prevented by "the fear that exposing it would make us look weak to them — and, indeed, make us feel weak and powerless ourselves." And, he adds, there's a gendered angle: while men don't divulge for fear of damage to perceived masculinity, for women, "disclosing their emotional distress may lead them to be told (particularly by their spouse) that they're too "thin-skinned" — or, more commonly, "too sensitive."

In other words, being in a position in which you need to do self-care is seen as a weakness or vulnerability rather than what it is: a natural part of the human condition, particularly for women. It can sometimes be tricky to talk about scientific gender differences in the context of feminism, but there is substantive evidence that there's a bit of difference in how women and men process their own emotions. While reading the emotions of others seems to be something women are educated to do, there appears to be a biological basis for the idea that women react more poorly to negative emotional stimuli like shame, embarrassment, or rejection. In other words, the negative impacts of emotions are a serious matter for women, and a very real one. Taking care of ourselves is not a matter of "weakness" or "sensitivity:" it's the reality of being in the world.

If we turn from emotional pain to physical pain, another thing that requires enormous self-care, we find that women's pain is invalidated here too. Self-care is, after all, not just for the emotions; for many women, it's a matter of keeping themselves afloat. There's evidence that chronic pain is particularly underdiagnosed and untreated in women, because it's seen as "exaggerated."

Women's perceptions of their own health and pain, even the very physical reality of their agony, are regularly dismissed or not taken seriously; an article in The Atlantic in 2015, in which the writer's wife was submitted to the ER in excruciating pain from an ovarian torsion and not attended to properly, led to a host of story-sharing from other women worldwide about similar experiences. A study in 2016 even found that women and men presenting with the same level of pain were treated in radically different time in ERs: men in 49 minutes, women in 65. In that context, seeing and feeing your pain, and taking time off to deal with it, is an extremely feminist act.

Self-Care Is A Manifestation Of Independent Identity

If you've hung around feminism long enough, you've heard the famous definition "Feminism: the radical notion that women are people," which first appeared in 1986. The key part of self-care is the notion of the self, of you alone: not you as a sister, a wife, a girlfriend, a partner, a supportive friend, but as your pure and female self. To take care of that self first, devoid of context, without excuses, in deep attendance to its needs and wants, is an acknowledgement of its importance and wholeness, of you as a person with weight in the world, rather than a mechanism defined by others.

This is not to say that good self-care can't exist in a context in which you have good, healthy, equitable relationships with others. A feminist is not by definition an island, and a good part of self-care can, in fact, be "nourishing your social life," as recommended by the UK mental health charity MIND. But relaxing, taking a walk, calling a friend, watching some crap TV, and generally doing something nurturing to yourself every so often is proof positive that you possess worth and that your needs are valuable.