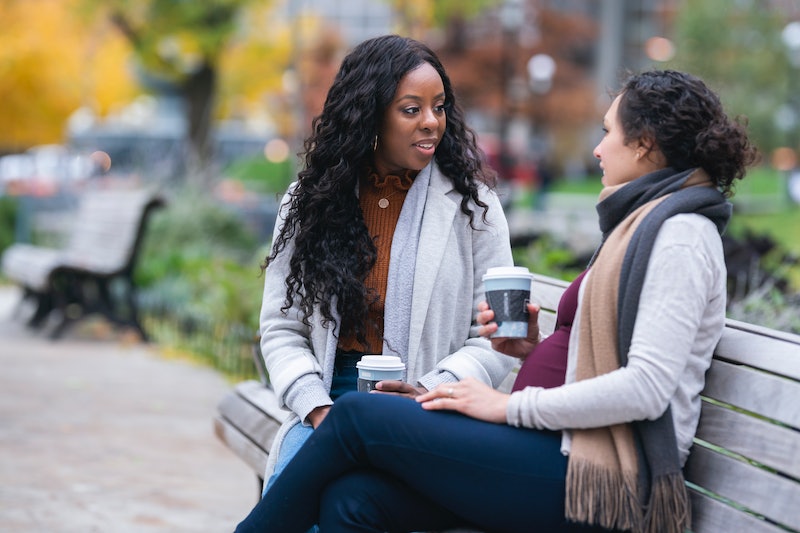 The emphasis on female friendship as the bedrock of adult life for women is not a new thing. A guide to the duties of noblewomen in 1600s Britain read that they needed to be concerned with "the care of children’s education, observing a husband’s commands, assisting the sick, relieving the poor, and being serviceable to our friends." And it's a thread that's only persisted throughout modern times, with everything from Girls to Parks & Recreation, emphasizing the hugely important role of female bonding. (Don't we all want Leslie Knope to call us a "beautiful tropical fish"?) But that neglects another side of friendships in general: Sometimes, they end, naturally or otherwise. Whether you grow apart, start to fight, or become increasingly uncomfortable in the relationship, sometimes the necessity of a friend breakup becomes apparent; but how do you break up with a friend properly?

We're becoming more aware of the serious pain caused by ending friendships, and the fact that it ranks as equivalent to that of romantic breakups. But it's still not a widely discussed experience; Meghan Murphy, writing in the New Statesman, called it a "strange cultural silence," but also makes the salient point that we're not culturally educated on how to deal with it. There are few songs or films or cultural experiences based wholly around the idea of how you break up with friends, but when it comes to boyfriends and girlfriends, we know the deal: talk to them in person, make it clear what's happened, let them down gently, behave properly, don't have sex with them six days later and confuse everybody.

The process of letting friendships go is a lot more opaque, but it doesn't have to be. Here's some expert advice on how to end a friendship.

Recognize Why It's Not Working In The First Place

What does a truly broken friendship look like? The distinct signs of a friendship that's flawed and needs some serious editing are as follows: It takes a lot of energy on your part, you hate hanging out with them and try to avoid it, you feel constantly criticized or pressured, there's constant fighting, and/or there doesn't seem to be a basis of respect any more. One of the experts, Suzanne Degges-White (whose book Toxic Friendships is one of the seminal texts on the subject), told Psychology Today that it basically boils down to three things:

There is a distinct difference between a broken friendship and one that can be repaired. In case you want clarification, an excellent guide over at Women's Health lays out different scenarios in which some fix-it can be achieved — if you're in different life stages, exploring new interests separately, or feel there's an inequality of effort — and when it can't: when there's personal betrayal, a fundamental feeling of stress or misery, or nothing seems to be changing after efforts to make it better.

Evaluate Your Process By Knowing The Four Types Of Friendship

You know an issue is gradually gaining more attention when the New York Times devotes a lengthy editorial to it — and their guide on friendship breakups from October has significant resources for those of us who are starting to understand that a friendship just isn't working any more, even if we're not entirely sure why or how. One of the most important insights offered is the notion that there are four "types" of friendship, dictated by the foundations of your history and the strength of your bond, and that extrication from the relationship depends on that type.

The "types," according to psychotherapist Melissa Cohen, are "friends you have because of shared history; friends you’ve made due to forced togetherness; your surface social friends; and growth friends, meaning the people you want by your side as you go through life wherever you are." If that doesn't entirely fit your conception of your friendship group, there's another idea about the division of friends: Geoffrey Greif's "must, trust, rust, and just" friends. Must friends are deep connections, trust friends are close and comfortable but not besties, rust friends are those with long histories, and just friends are acquaintances you're happy to see but aren't going to pursue for a more intense connection.

The type of friendship you have dictates the manner in which it should end: Serious or long-lived friendships are likely to need a direct talk, while others can be tapered off gently, through less and less attention.

"The longer you allow a poor relationship to drag on," writes Degges-White with co-author Judy Pochel van Tieghem in Toxic Friends , "the longer your period of suffering will last," and "the longer you delay, the more deeply entrenched the two of you become in the unhealthy system." It's a hard lesson to learn if you've been trying to make it work, whether by working on yourself (am I just being too judgmental? Maybe they're not being unreasonable) or by trying to have difficult conversations with them. But the process of "fixing" can drag on too long. Put a limit on things: Give it one more chance or another two months, for instance, and if there's no substantial change, get out.

Make It About You

No, really: The "it's not you, it's me" approach is the best one, because it realistically is probably about you, your expectations, your capabilities, and what you need and want from friends. Melissa Cohen told the New York Times:

It’s O.K. to say, "I truly care about you and the relationship we’ve had, but I don’t have the bandwidth or time to devote to our friendship anymore," or "I can’t be the friend that you want me to be right now" ... Even if you feel it’s your friend who is sucking you dry, or stuck in college partying mode, or not being considerate, you can compassionately and authentically say, "We don’t seem to share the same goals and perspectives."

Acknowledging your part in what went wrong is not only better for them, it's also crucial for you to have healthier relationships in the future. And own your decision; don't say they pushed you to it.

Be Mature With Your Mutual Friends

Tell your mutual friends. Don't let them find out from anybody else; this is a matter that may seriously affect them and they deserve to know. Psych Central recommends what they call "The Sweden Strategy," in which you remain neutral and do not ask friends to pick or choose, even though they may make that decision for themselves. "Get comfortable with the fact that they may still spend a great deal of time with your ex-gal pal and that this is no reflection on you," the publication notes. "Resist bad mouthing your ex-friend to others. It will only make you look bad. If you need to vent, go to someone well outside the situation."

Your other friends do not need your mess; this is your business and yours alone, unless there has been a betrayal or abuse so fundamental that you feel they absolutely must know about it. And even then, be very careful.

Yes, grief is a perfectly rational way to discuss the feelings experienced after a breakup between friends, even if you were the one doing the breakup; society often minimizes the emotional results of these situations despite the fact that friendships often represent years of investment, intimacy and trust. Psych Central mentions a study where emotional negativity was higher among women who had dumped their friends than those who had dumped their lovers. As it turns out, the neurochemical experience of breakups with friends includes guilt, withdrawal, and physical pain.

The proper way to deal with this is to treat it as what it is: a loss. Whether it's grieving rituals, saying goodbye with a letter you'll never send, crying with a bucket of ice cream or something else, give yourself the space to be sad. Then, crucially, stop and pick yourself up. Dr. Irene Levine, friendship expert and author of Best Friends Forever, mentions in her advice column that "continuing to ruminate about the friendship will only make you more depressed rather than bringing about closure."

Celebrate Your Other Friendship Opportunities

A fascinating article in Quartz on the sociology of ending friendships uncovered some intriguing research: If you're more likely to believe that you can make new friends easily and have control over that aspect of your life, you tend to feel more free to escape bad friendships or ones that no longer work for you.

The findings are the work of Professor Angela Bahns, who has worked on how the friend-choices offered in our area affect our relationships; with a lot of different options, as on a college campus, we'll pick people who are similar and be more able to leave the friendship, but in a small community, we'll be satisfied with friends who are dissimilar and be less willing to break it up. If you don't feel as if you have the courage to leave or sufficient options to "replace" the friend who's causing problems, focus on other friendships and on the potential to meet new people.