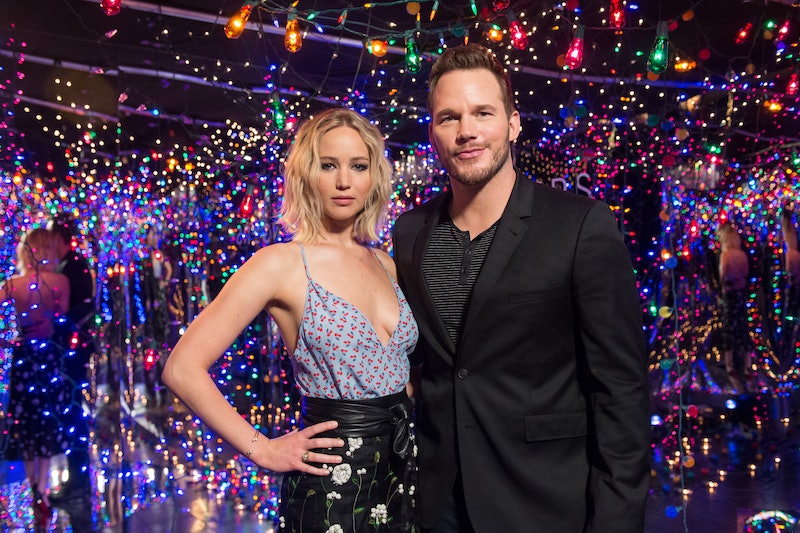 Former Parks and Recreation alum and general teddy bear of a human being Chris Pratt spoke about his Passengers sex scenes recently. While you may have already read about Jennifer Lawrence's Passengers sex scene, and her use of alcohol to try and ease her anxiety before the scene, Pratt offers a different take. He mentions that he tried to be sensitive to Lawrence's feelings and was doing his darnedest to make her feel at ease in what is, let's admit, a pretty weird situation. And that's a refreshing way to talk about sex scenes, but especially important to make a point of this year.

“I don’t want to make generalizations based on gender, but I feel the responsibility falls on me [to make sure my co-star is comfortable], and I’ve been in that situation a couple times. Essentially, it’s your job to just minimize the discomfort by, you know, making sure there’s nobody else on set than is required, having a closed set, periodically checking in, and just doing everything you can to assure the person you’re with that they’re okay. For all the sense of anxiety that comes leading up to a scene like this, you get into it and you realize there’s really nothing sexy about it at all. It’s just really awkward. But you know, it’s part of the gig and you just do what you can to check in with the other person and try to minimize any discomfort that they feel.”

While it's good that Pratt is acknowledging the potential awkwardness of the set up, let's not go overboard in praising him. After all, it's basic decency to think of his female co-star's comfort during scenes like that, and, if I got overexcited about this, it would be sexism, plain and simple. It would be me expecting less from men, simply because of their gender. However, I do think putting your co-star at ease during an explicit scene is (a) important to do and (b) rarely discussed — especially right now. And this conversation has been at the forefront of people's minds this month in particular due to a recent controversy.

Trigger warning. Over the weekend of Dec. 3, a clip from an interview in Paris during the 2013 La Cinémathèque Française showed director Last Tango In Paris Bernardo Bertolucci talking about how he and Marlon Brando came up with the idea to use butter in a scripted rape scene without informing actor Maria Schneider beforehand. Bertolucci wanted Schneider to enter into the scripted rape scene with limited knowledge of what would come to pass so that her reactions would be more authentic, but the fact that the actress was not given the opportunity to consent off-camera to a part of an already nonconsensual on-camera scene left a bad taste in audience's mouths when the clip resurfaced.

Now, in the case of Chris Pratt, Jennifer Lawrence, and Passengers, nothing nonconsensual is happening on or off camera. But, despite the very different scenario, it's important to talk about sex scenes in the way that Pratt talks about them in this interview. His attention to Lawrence's state of mind before the cameras start rolling suggests an allegiance between the two actors and a bond of basic respect between them. It places the actors' comfort first, and Pratt is correct in his emphasis on creating a safe space for his co-workers when staging and filming such intimate scenes.

Sure, he isn't pushing boundaries with his statement about Passengers' sex scene. But, after the recent controversy, his take on how to approach a sex scene off-camera to make his fellow actor comfortable on-camera feels like a much-needed breath of fresh air from Hollywood.