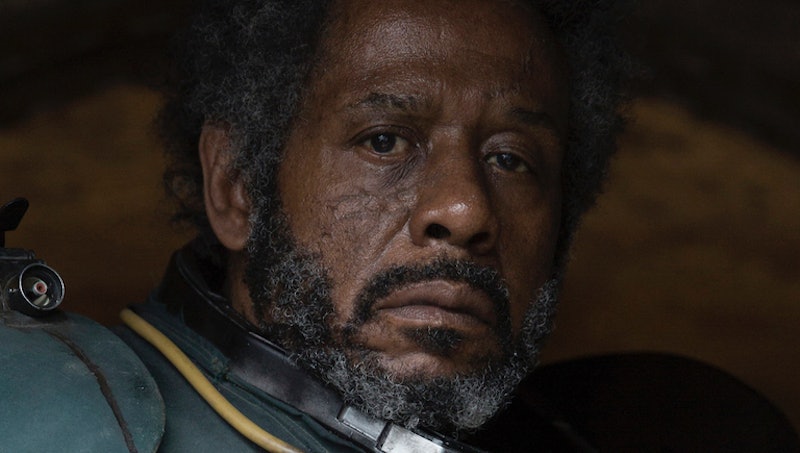 An army of new characters are entering the Star Wars universe via their appearance in Rogue One: A Star Wars Story. But one of the movie's ensemble members is a transfer from an existing Star Wars property. Forest Whitaker plays Saw Gerrera in Rogue One . This old-school rebel appeared first in the animated series Star Wars: The Clone Wars, voiced by Andrew Kishino. Rogue One takes place chronologically after the events of The Clone Wars television show. And while Disney announced in 2014 that the majority of the "Expanded Universe" that exists in Star Wars books, comics, and video games is not technically a part of the canon, The Clone Wars does make the cut. That means that fans already have access to a chunk of this character's backstory. So, who is Saw Gerrera and how was he recruited by the Rebel Alliance?

As you can tell from the Rogue One trailers, Saw is a human. His home planet is called Onderon, which ends up being a key battleground during the Clone Wars. Saw has a sister named Steela. On the Luke-Skywalker-to-Han-Solo scale, Saw skews to Han's direction. He's no idealist with a hankering to go out there and fight for a belief. But he's forced to take action when Onderon is taken over by King Sanjay Rash. Unlike the planet's former leader, Rash doesn't want his people to stay out of the Clone Wars conflict. He is loyal to the Separatist movement championed by Darth Sidious and Count Dooku to challenge the authority of the Republic. Since Saw and Steela oppose Rash and the Separatists, they are banished.

Saw is interested mostly in the safety and freedom of his own people and not in some larger cause. Still, he ends up in a kind-of Jedi boot camp with Obi-Wan Kenobi, Anakin Skywalker, and Ahsoka Tano after his faction requests assistance from the High Council. Some sibling rivalry bubbles up when Steela is chosen to lead the Onderon rebels. She's killed when they launch their final, successful mission to un-do Rash's coup, and Saw lives with the guilt of feeling indirectly responsible for it.

From the Onderon battles to other theaters of war, Saw becomes a somewhat accidental member of the burgeoning Rebel Alliance. He's seen some things already, which ought to make him a very interesting character to comment on the action in Rogue One. Clone Wars showrunner Dave Filoni told Slash Film that it makes "a lot of sense" to have someone like Saw represent the history of the resistance and to bridge that gap between the prequels and this new film. "And I like that it seeds off of the ideas that we had at Lucasfilm in the very early days of Rebellion story, which is that it is rooted out of Jedi’s training these groups on a small planetary scale," Filoni said. "And that those are the seeds that were placed throughout the galaxy of the Rebellion."

In an interview with Entertainment Weekly, Lucasfilm president Kathleen Kennedy confirmed that Saw Gerrera hasn't abandoned his lone wolf tendencies, even though he's a part of an army now. “Consider him kind of a battered veteran who leads a band of Rebel extremists,” she said. “He’s on the fringe of the Rebel Alliance. Even [they] are a little concerned about him.”

Every war movie needs a reluctant, grizzled freedom fighter to be the voice of reason. From his Clone Wars history, it seems that Saw Gerrara may fill that need for Rogue One.