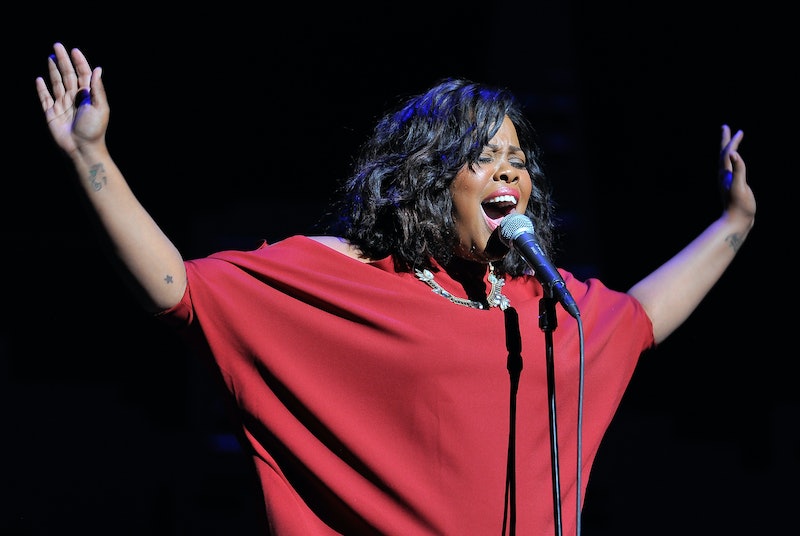 Life is imitating Glee — on Tuesday night's episode Mercedes Jones moved to NYC to work on her album and made her big return as a series regular. And seemingly out of the blue, Amber Riley performed her new song "Colorblind" on the Queen Latifah Show on Thursday. We learned that Riley was working on an album in late 2013, but who knew she had the time while she was busy winning Dancing With the Stars ? Riley is the third Glee star to release a single, so how does "Colorblind" stack up against Lea Michele and Naya Rivera's solo projects?

Riley's performance comes close on the heels of Lea Michele's Louder release in March and Naya Rivera's September release of her first single "Sorry". There's no word out on whether or not Riley's due to put out a solo album later this year, but she tweeted and posted on her Instagram account that "Colorblind" will be available on iTunes on April 8 and she'll be performing the song on Glee. See, I told you life is imitating the FOX series.

But anyway, Riley's performance of the ballad was beautiful and according to Queen Latifah, "Colorblind" is going to move souls. Not that we're surprised, Riley's has always had one of the best voices on Glee. Watch her performance here:

First, we love that she's going to sing this song on Glee — because her voice is amazing and the song is beautiful. (And we'd be willing to bet that she sings it in a recording studio which would be very Beyoncé in Dream Girls.) "Colorblind," if you didn't deduce as much from the title and lyrics, is about loss. And how that loss affects how you see the world — in the case of Riley's new song, everything around her is lack luster because she's lost her sight for colors (obviously). A little sad and really, really literal but we get it and we'd probably actually listen to this song.

Riley's new song is a wild departure from Lea Michele's first Louder single, "Cannonball," that was more of a girl power anthem about rising from the ashes triumphantly and Rivera's single "Sorry," the attitude-heavy song about snagging another girl's man. (Lea Michele's released other singles from her new album since, but for the purpose of this post, we're looking at the first single only.) "Colorblind" is simpler all the way down to its lyrics like, "When the world is seeing yellow/I only see gray," and it's more vulnerable than her costars' two songs.

It's almost as if each one of these Glee stars channelled their characters when releasing these singles — because we all know that Rachel Berry is all about being strong for herself, Santana's all about her attitude, and Mercedes, even with her diva mentality, has always had a vulnerability that made her likable. So, in the interest of not sparking another Diva-Off — rather than declaring a winning song out of these three, we'll say that Riley's new song was a perfect fit for her solo debut. And that we can't wait to hear it on Glee.