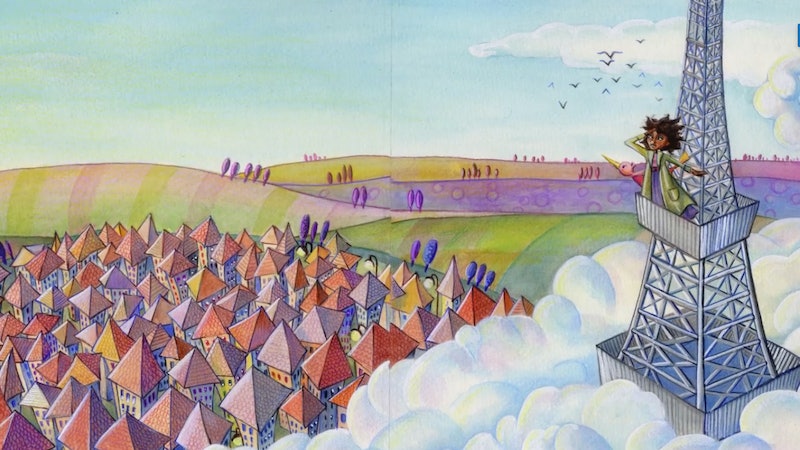 If you've been looking to share stories of badass women with your kids, these Queen Girls picture books about Bessie Coleman, Isadora Duncan, and Savitribai Phule are right up your alley. Crowdfunding now on Kickstarter, Queen Girls plans to produce picture books in English and Spanish on a one-to-one model — for every book sold, the publishers will donate a copy to a child in need.

The Queen Girls picture books are the brainchild of Jimena Duran, Andrea Doshi, and Chiara Fabbri. All three women are well-suited to the task of producing positive children's books. Duran "has a background ... in the startup world," according to GirlTalkHQ, and was inspired to create children's content after becoming a mother. Doshi is a child speech pathologist, and Fabbri is an illustrator and environmentalist.

For its first three subjects, Queen Girls has selected Bessie Coleman, Isadora Duncan, and Savitribai Phule. The three women achieved great things during the 19th and 20th centuries, and broke a few glass ceilings along the way.

Bessie, Queen of the Sky will focus on the life of Coleman, a woman of African and Native American descent, who became the first black woman to hold a pilot's license. When she was barred entry to U.S. schools, Coleman learned French and traveled to France to attend the Caudron Brothers' School of Aviation. A few months later, she earned her pilot's license from the Federation Aeronautique Internationale.

Isadora, the Rebel Queen tackles the story of Duncan, an American dancer who pioneered natural movement techniques over the rigidity of ballet. Duncan danced in an iconic, Greek-inspired tunic and bare feet, her costuming in stark contrast to the corsets and pointe slippers worn by ballerinas.

Finally, Savi, Queen of Education will explore Phule's life and work. Born in India in 1831, Phule conducted massive social reforms in her community by helping to improve the lives of widowed child brides, unmarried pregnant women, and rape victims. Her best known work was the establishment of India's first school for women at Bhide Wadai in Pune, where she became her country's first female teacher.

At the time of this writing, the Queen Girls Kickstarter campaign has raised $7,459 of its $8,000 goal through donations from more than 150 backers. Donor rewards include t-shirts, activity kits for parents and educators, and original artwork from Fabbri. For more information, check out Queen Girls on Twitter.