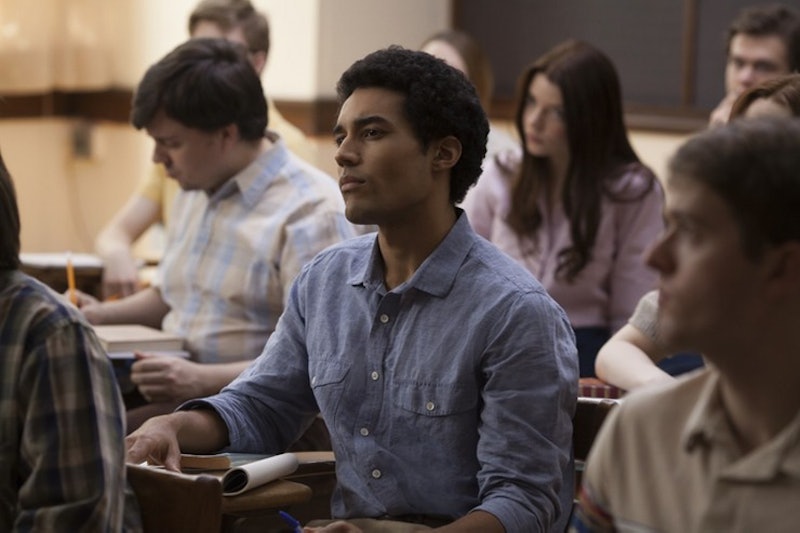 The newest movie about a youthful, pre-White House Barack Obama jumps further back in time than August's romantic and dialogue-heavy Southside With You, which chronicled Barack and Michelle Obama's first date. Barry, which is being released on Netflix on Dec. 16, looks at Obama's college years, and stars Devon Terrell as the young man who would become president one day. The accuracy of the highly focused Southside With You lay more in setting, with much of the dialog naturally being fictionalized, but how accurate is Barry , a film that spans a wider physical space and frame of time?

In a recent Forbes interview, director Vikram Gandhi discussed the making of the film and how he worked to ensure that the person and the time it represented was accurate. As Gandhi explained, the film pulls from research into public records, as well as, according to a review from Variety, a number of details that come from Obama's memoir Dreams From My Father. Gandhi told Forbes that his goal was to accurately tell the story of "a mixed-race kid in New York in 1981 that would one day become the 44th President of the United States," which can be seen in moments from the film where Barry drifts in and out of primarily white social circles and primarily black ones with similar ease (or lack thereof) as he struggles to figure out where he belongs and who he is.

Naturally, some elements of the true history of Obama's time at Columbia have been modified, but with a focus on remaining loyal to the overall meaning and experience. For example, in Barry, the character of Charlotte, Barry's wealthy white girlfriend (played by Anya Taylor-Joy), is not based off of one individual person from Obama's college history but is rather a composite of several of the relationships that he had during that time in his life. "It made more sense to composite the character," Gandhi told Forbes. "It was more important to tell what he went through during that time and there are moments with Charlotte that capture that."

The film also maintains a faithfulness to the setting of college life at Columbia, which is helped along by similarities between Gandhi's own life and Obama's. Gandhi himself also attended Columbia, and while speaking with Forbes, he explained some of their shared past. "Obama lived in Morningside Heights on 109th Street and I lived in the building right next door to where he’d lived,” he said.

Finally, the film's accuracy is seen in another element outside of the script and setting: the acting. Barry's lead, Terrell, represents a version of Obama that not only is recognizable and accurate to those of us who know the president as he is today, but is also altered, a fully fleshed out, younger and less certain version of the now-famous man. Gandhi told The L.A. Times that Terrell even took vitamin supplements to try to develop a more lanky body and gait like Obama's.

The story of Obama's path to the White House has indeed been covered many times in public records and written or verbal accounts, but Barry is here to give not only facts, but also setting, atmosphere, and characterization.