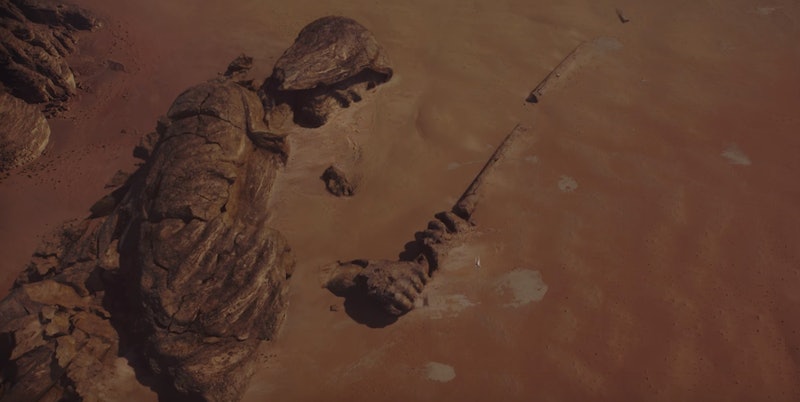 Rogue One: A Star Wars Story is the story of rebels, not Jedi — something made very clear in early trailers and promotional material. And yet, as with any part of the Star Wars franchise, the myth of the Jedi looms large. Rogue One takes place right before Star Wars: Episode IV, during a time when the Jedi are believed to be extinct. But their influence is still present, as evidenced by the giant Jedi statue spotted in the trailers. But, it looks like their influence might be waining, as some rebels lose faith in a higher power coming to save them. The fallen Jedi statue in Rogue One represents the Rebellion's battered hope in the Force, and also their fight to survive.

Shown just briefly in the trailers, the Jedi statue in Rogue One appears old and battered — fallen — a sign that people are losing hope that the Jedi will return to help save them from the Empire's totalitarian rule. Sadly, the statue seems to represent the dire state of the resistance in Rogue One. Found on the moon Jedha, the statue is believed to be part of the Jedi Temple on Jedha (possibly the first Jedi Temple in the Galaxy), according to Games Radar. The Jedi statue, then, would be a symbol of hope and faith in a greater good despite the Empire's growing influence.

In fact, Jedha is a holy site to the Jedi and those that worship them — or, as the case may be in Rogue One, those that simply believe in their existence. "The Force is basically in Star Wars like a religion, and they're losing their faith in the period that we start the movie," director Gareth Edwards said in an interview with Entertainment Weekly . Jedha, then, is akin to a holy city or pilgrimage site. As such, Edwards revealed, it has been invaded by the Empire. "It's an occupied territory... for reasons we probably can't reveal," he said. One of those reasons, however, is believed to be the planet's natural resources of kyber crystals, the elements used to create lightsabers and the Death Star laser.

Jedha, along with the fallen Jedi statue, is a symbol of hope to members of the Rebel Alliance who follow Jyn Erso into battle. It's probably not a coincidence, then, that Jedha is home to Bodhi Rook, Chirrut Îmwe, and Blaze Malbus, three members of the Rogue One team who join Jyn in stealing the plans to the Death Star. According to Inverse, Jedha is also home to Rebel extremist, Saw Gerrera, who has a hidden base on the moon.

In Rogue One, the Jedi statue and Jedha represent the hope of the Rebellion, but also the hold of the Empire, which begs the question: how much can the Rebels really rely on the Jedi or the Force for hope or guidance? This seems to be one of the main tensions in Rogue One, when Rebels realize it's time to stop hoping for a savior and start saving themselves.