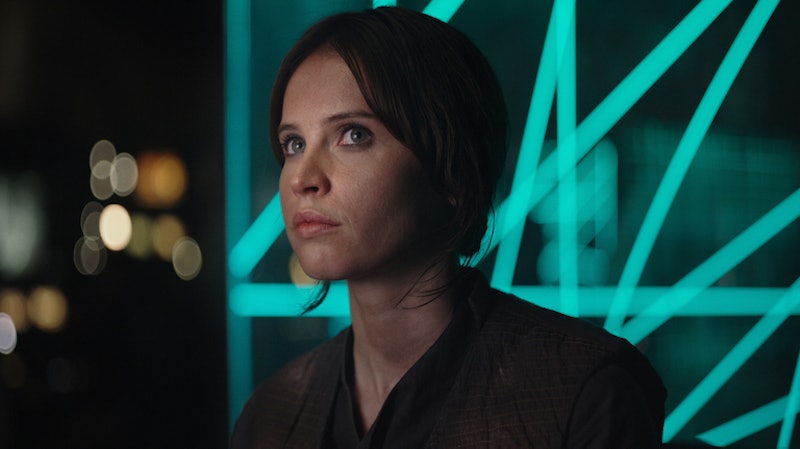 I often wonder what goes on in the minds of people who don't get swept up in the excitement of a huge movie release or a binge-able TV show. What's it like to be so unmoved? So bereft of joy and enthusiasm? I wouldn't know, because Rogue One: A Star Wars Story is coming out Dec. 16, and I feel like time has slowed down. Star Wars is a part of me, just like my hometown and my favorite song. Even the preachy prequels couldn't diminish my love for the sci-fi/fantasy franchise. So the prospect of any new Star Wars movie fills me with a lot of feelings. Some of those feelings are conflicting, but all of them are strong. I can't be apathetic about Star Wars, and I bet you can't either. In fact, I'm reasonably sure that you went through the following 13 emotional stages while waiting for Rogue One .

The best part about this process is that it's going to start up all over again as soon as your Rogue One screening ends. Episode VIII is due out in 2017; the Han Solo origin movie is in the works; Episode IX will eventually complete the new trilogy; and other standalone films are likely to get the green light. So over the next few years, there won't be a moment when you're not either watching a new Star Wars movie or anticipating the next one. What a time to be alive.

Without further ado, the emotional journey of waiting to see Rogue One:

1. You Rejoice That Certain Sacrifices Made By Rebels Will Finally Being Recognized

As you know from A New Hope, it was hard enough for the Alliance to get the Death Star plans where they needed to go. Imagine how hard it was to steal them in the first place. Since Rogue One will finally tell the story of that mission, credit may be given where credit is due.

2. You Wonder How This Movie Fits Into The New Trilogy

Specifically, are any of the characters related to anyone you met in The Force Awakens?

As if you needed another reason to do the full marathon again.

First Rey, then Felicity Jones as Jyn Erso. I'm so used to women being underrepresented in blockbuster action movies that Star Wars giving me two central female characters in such quick succession feels like a dream.

5. You Freak Out Over The Amazingly Diverse Cast

The Force Awakens set the tone for this new enlightened era in Star Wars casting. And Rogue One carries it forward, giving major roles to actors like Diego Luna, Forest Whitaker, Riz Ahmed, and Donnie Yen.

6. You Pour Over Trailers & Photos Looking For Easter Eggs & Clues

7. You Make "I Rebel" Your New Mantra

It's clear from just a few minutes of footage that Jyn Erso is by no means here to screw around. New life hero.

8. You Worry Over Reshoot Reports

Entertainment Weekly reported that a few weeks of Rogue One reshoots were to commence over the summer, and naturally, that makes you worry about the movie. Is everything OK? How much of a complicated movie with lots of post-production needs can be fixed in that amount of time?

9. But Then You Remember How Movies Work

If the story needed to be clarified a little more or certain sequences needed to be perfected, then aren't you glad they took the time to plug those holes rather than letting them go? Anyway, it's not unusual for a movie of this scope to utilize reshoots. Just breathe. It's going to be OK.

10. You Plan Your Rogue One Night Over Brunch

It's an essential part of the process to gather your Star Wars buddies to plot out your ticket buying plan, pre-movie dinner, and ideal theater location.

11. You Have A Night-Latte So You Can Grab Tickets As Soon As They Go On Sale

Wait till morning? What am I, some kind of amateur?

Rogue One is reportedly different in many ways from any of the episodic films. But it's still a Star Wars movie and thus, a significant life experience for you. It's okay to get choked up. Crying just means that you care.

13. Bonus Stage: You Reflect & Dissect Everything You Just Saw

After the movie ends, you'll proceed to the nearest coffee shop or bar to have an exhaustive post-show discussion. Don't forget to keep it civil.

You're in the later stages now. Rogue One is almost here, and, if all goes according to plan, will live up to the hype.