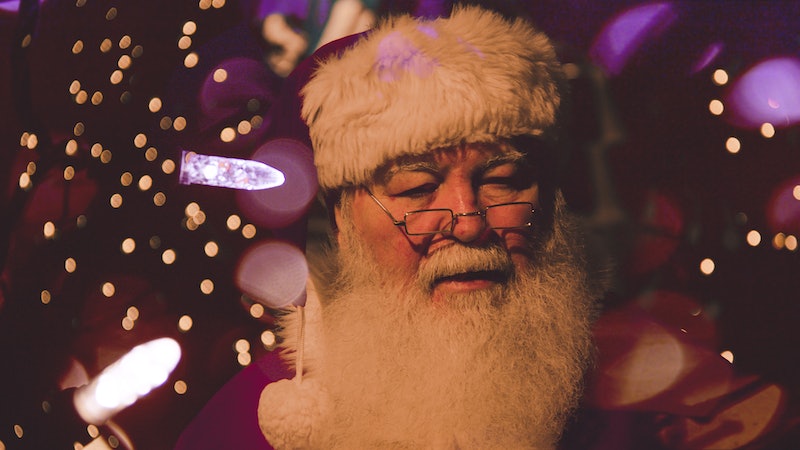 Santa Claus is coming to town next week, and you know what that means: He’s making a list, and checking it twice, he’s gonna to find out who’s naughty and nice — and then give the former big ol’ lumps of coal. Why does Santa give coal to naughty children? I mean, it seems kind of random, doesn’t it? Especially these days, most people probably don’t keep a lot of coal in their homes. Like a lot of holiday traditions, this one is rooted in history.

The reason that Santa gives coal to naughty kiddos is… wait for it… actually it’s not very clear. There’s not a concrete date that people started associating Santa Claus with coal, but there is evidence that the idea of giving coal to bad kids existed long before our modern idea of Santa Claus was born. A number of cultures have their own variations of a mythological gift-giver at Christmas, and many of them have a punitive component to their holiday stories — that is, good kids get gifts, and bad ones are punished with coal, other undesirable objects, and, er, worse stuff. For example, near Epiphany in early January, Italian children receive visits from a witch known as “La Befana,” who flies around on a broom and gets into people’s homes via chimneys and keyholes. Kids who have been good get candy and small toys in their stockings, while naughty ones get coal.

In some of these Christmas legends, receiving a lump of coal is the least of kids’ worries. In parts of France and Belgium, for example, St. Nicholas was historically accompanied by a figure known as “Père Fouettard,” a name that translates to “The Whipping Father.” (Can you see where this is going?) Legend dating to the 12th century has it that Père Fouettard started out as an innkeeper who drugged and murdered schoolchildren and then made stew out of them, Sweeny Todd-style. (Yes, really.) St. Nicholas brought the kids back to life and then made Père Fouettard his companion; while St. Nick gave out presents to good kids, the Whipping Father would give misbehaving children coal, birch branches, and beatings.

Thanks to a 2015 horror film, you may already be familiar with Krampus, the Christmas demon of Austria. Historical images of Krampus show a demon fit to scare any child into good behavior: He has cloven feet, horns, dark red skin, a long tongue snaking from his mouth, and chains dangling from his body. According to The Scotsman, in Austrian folklore, Father Christmas gave presents to good kids, while bad kids would face punishment from the demon. This punishment sometimes entailed lumps of coal, but also included beatings and being kidnapped and eaten. (Eek!)

There’s also Knecht Ruprecht, a German companion to St. Nicholas, whose punishment for bad kids is coal-adjacent: When kids fail to pray properly, he beats them with a sack of ashes.

So we know that giving Christmas coal to naughty kids isn’t unique to Santa Claus. But why is coal such a popular punishment in the first place? Mashable theorizes that it simply has to do with convenience. Many of these Christmas figures are in some way tied to fireplaces — La Befana and Santa Claus enter homes via the chimney, as does Black Pete, the controversial, black-faced companion of Sinterklaas, the Dutch version of St. Nicholas. St. Nicholas places gifts for children in shoes next to the fireplace. Thus, if you’re a supernatural Christmas legend, and you come to the home of a naughty kid, it’s just easy to grab a lump of coal from the fireplace and give it to the kid as a sign that he or she is on notice. Brian Horrigan of the Minnesota History Center agrees, telling CBS Minnesota, “Santa Claus comes down chimneys…and he needs something to give the bad kid. So he’s looking around and picks up a lump of coal, and sticks that into the kid’s stocking.”

Compared to the violent shenanigans of Krampus, Père Fouettard, and Knecht Ruprecht, Santa’s punishment of coal doesn’t seem all that bad. Waking up to a black lump of coal instead of lovely presents on Christmas morning would certainly be disappointing, but it sure beats getting beaten or kidnapped by a Christmas demon, right?